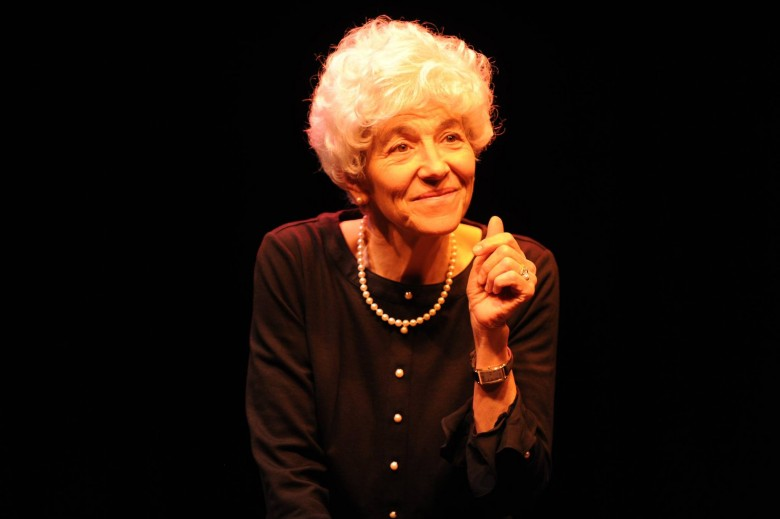 There is an old woman at the Jewish Repertory Theatre with quite a story to tell. Her name is Rose. She is 80 years old, has breathing and cholesterol issues, and is dying. Well, not imminently, but at 80, she says, "How much more time can I have?"

Rose wears a loose black dress over her thin frame, a string of pearls, and velvet mules. She is sitting shiva for a murdered nine-year-old girl whom she has never met. In what is really a lengthy monologue, she vividly recounts important events in her life, starting in a shtetl in Ukraine and ending in an apartment in a hotel in Miami Beach. She survived Cossacks, Nazis and the Warsaw Ghetto, and the Exodus to Palestine. Along the way she fell in love, married–more than once–and became the owner of a hotel. As a child she was good at languages–“I became pretentious in several languages at once”–and longed to leave her village to go to Warsaw.

Rose talks about God, Yiddish, the Jewish culture, and the Jewish peasant experience in the shtetls of Europe. She says at one point that the greatest contribution Jews have made to the world is to ask questions that cannot be answered, along with their ability to question, question, question–“on the other hand.” She is appalled by the moral ambiguity of what was happening in Israel in the late 1990s and has violent arguments with her son and daughter-in-law on the subject.

Written by Martin Sherman, the play premiered in London in 1999, so Rose’s life spans much of twentieth century European history. While we learn nothing dramatically new about historical events, experiencing those events through her personal story and the people in her life make this one-woman play very engaging. Sherman's renditions of her experiences just before and during her time in the Warsaw Ghetto are visceral. The descriptions of Rose's mother reveal a fascinating character full of surprises. Her first love, Yussel, is a poor artist and a complex man who disappears into the Nazi machine. Her daughter-in-law is the epitome of the converted fanatic who is blind to the suffering of others.

Tina Rausa is Rose. She lives her character, inhabiting her completely for the most part. She is wry and funny, angry and devastated, and occasionally sentimental while she recounts her life of tragedy and comedy. Sitting on a wooden bench for most of the play requires Ms. Rausa to convey her feelings through body language and facial expression alone, which she does very well. Her description of the death of her daughter is heart-rending. One can feel her physical frailty but not question how tough a survivor she is. Ms. Rausa gives an excellent performance that on opening night was marred somewhat by her reaching for dialogue, and occasionally being unclear as to where she was in her story. She came back each time to fully inhabit Rose, and those blips will most likely disappear. They may be gone already.

Direction is by Saul Elkin’s sure hand. David Dwyer’s set is simple and perfect for the play, as are Sound and Lighting by Tom Makar and Brian Cavanaugh, and Costume Design by Ann Emo. They convey the current simplicity of Rose’s life without being intrusive in any way.

Rose is very well written, funny at times, tragic and horrifying at others. It does not break any new ground or offer any startling insights about the human condition. It is about a life lived in tumultuous times and the repercussions and changes that occurred politically and culturally for many, and personally for this lovely Jewish woman named Rose.