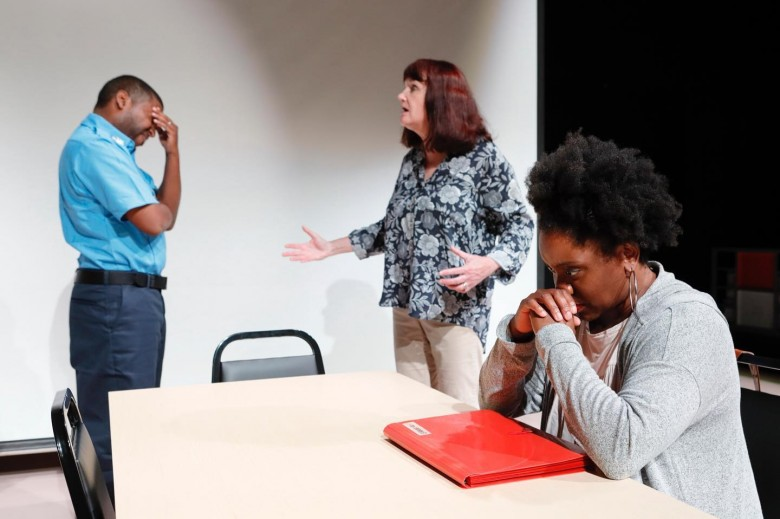 Pipeline, a searing drama by Obie Award-winning playwright Dominque Morisseau, a MacArthur Foundation “Genius” Grant recipient, references the “school-to-prison pipeline” faced by African American youth. She offers up a conundrum that plagues American society every day of every year and has for longer than anyone alive has been on the earth. What is best for African American boys and young men given that their lives and freedom are in danger in a society that views them as a threat?

In the scenario presented in Pipeline, that question centers around whether it is better for black youth to be schooled in the overcrowded, understaffed, underfunded, mostly segregated, sometimes violent public schools, or when financially feasible or through scholarships, to be sent off to posh boarding academies where they are the token people of color amidst the privileged white students? Which is more dangerous, or are they just dangerous in different ways? The underlying tragedy is that their lives are in danger, no matter where they live or where they are educated.

Director Lorna C. Hill, her crew, and actors have created a stellar production of Pipeline. The simple set by Robert J. Ball has a bare, very light pink floor and concrete wall with only a doorway, wall clock and phone to indicate place so the action is always focused on the unfolding drama. The only interruptions are a few clunky scene changes. Otherwise, the narrative flow is mesmerizing as the scenes shift from place to place and projections of violent scenes between police and students in schools flash across the concrete wall.

Nya (Shanntina Moore) is a teacher at a school with metal detectors and security guards policing the frequent, sometimes life-threatening violence. Her longtime, and quite hilarious co-worker, Laurie (Mary Moebius) is devoted to the students. They talk in the break room, often with a charming security guard, Dun (Phil Davis, Sr.), with whom Nya has a flirtation of sorts. Nya and her ex-husband Xavier (Johnny Rowe) share their son Omari (Jerai Khadim), who goes to boarding school and is in serious trouble for attacking a teacher, his third strike. His girlfriend at school, Jasmine, (Samantha Cruz) is another outsider. They spar about his leaving school and what will become of them both.

As the 90-minute play unfolds, the troubles at both schools, how they affect the characters, their relationships, their livelihoods, and what it means for society are explored with passion, frustration and desperation. Questions are asked, but answers are few.

Shanntina Moore is stunning as Nya. Her performance is nuanced, powerful, and heartbreaking. Her maternal love is fierce, coupled with extreme fear for her child, fury with him for what his rage has wrought, and disappointment in her own frailties and relationships with men. She expresses all of this and more, never missing a beat. Her monologue deconstructing the poem “We Real Cool” by Gwendolyn Brooks is a tour de force in writing and acting as she faces the audience and presents a master class on white establishment publishing vs. the more graffiti-like urban style and what that means.

Jerai Khadim appeared to be struggling at times to reach the level of anger, confusion, and rage Omari is feeling. However, when he does, as in his confrontation with his father and his monologue about Bigger Thomas, he is excellent. He clearly expresses the feelings of a not-still-a-boy-but-not-yet-a-man youth in the throes of a deep rage that he does not fully understand.

Samantha Cruz is excellent as Jasmine. Her bravado and trash talking collapses into softness and anxiety over her and Omari’s fate, in a very endearing and heartfelt performance.

Mary Moebius is a hoot as Laurie. She is tough as nails and as foul-mouthed as they come but expresses a deep devotion to and understanding of her students at the school she has worked in for many years.

Phil Davis, Sr. is excellent as Dun. He is delightful as he flirts with Nya, and passionate in his monologue about just what his job entails. Johnny Rowe also excels as Xavier. He expresses his desire to re-connect with his son, and as a man clearly used to getting what he wants, his surprise and disappointment at Omari’s response is evident. The standoff between Dun and Xavier is very well done by both actors, like two roosters facing off in the farmyard.

There are no easy answers in Pipeline. As Dun says, the rage and resentment felt by African American youth is from a “source older than the bricks in this building.” Centuries of being the other has resulted in extreme violence and mass incarceration. As Nya says of Omari, “He doesn’t belong anywhere.” To thrive as a society, that must change. Dominique Morisseau’s play and Ujima Theater’s production of it acts to personalize and bring to the forefront of our consciousness just how insidious and damaging the school-to-prison pipeline is. Pipeline is brilliant and deserves a wide audience in our fair city.

See it at Ujima Theatre through October 13th.