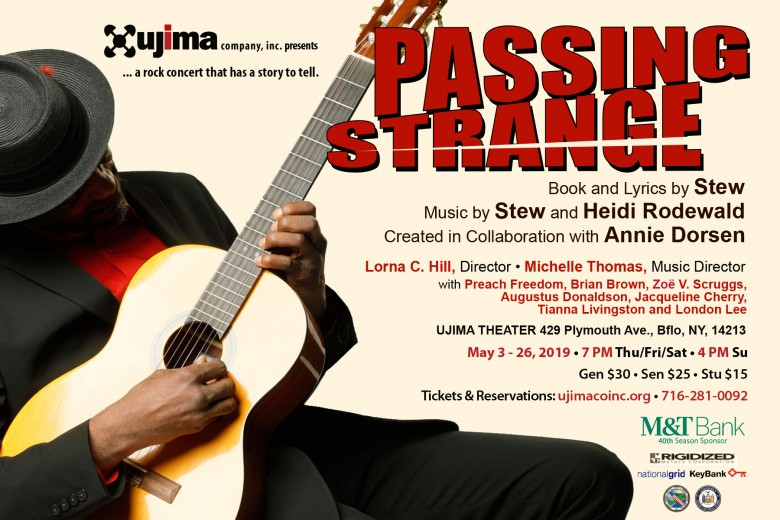 Ujima Company, Inc. has opened its first show, Passing Strange, in its new home, and both are stunners.

The black box theater is in what was the gymnasium in the P.S. 77 building on Plymouth Avenue, now gorgeously repurposed by PUSH Buffalo. The stage is flanked on three sides by bright red seats, with backdrop curtains on the fourth where, for this show, the musicians and the Narrator are seated next to a slightly raised platform on which several chairs are perched for the actors.

The air on Opening Night was festive and the audience was eager with anticipation for the 41-year-old company’s first ever performance in its new digs. The late start, with an apology by the legendary Founder, Artistic Director, and Director of this show, Lorna C. Hill, added to the excitement with perhaps a quiet grumble or two to just get on with it. Boy, was it worth the wait.

Told by the incredible Preach Freedom as the Narrator, Passing Strange is the story a young black man’s existential journey, from black middle class Los Angeles to the laid back coffee houses (hash palaces) of Amsterdam, and the speed-fueled angry artist subculture in Berlin, in search of “The Real” and his own identity. Known only as the Youth, he leaves his crestfallen mother and stoner church choir-cum-punk-rock friends behind to pursue his art and his dreams in Europe.

From the first notes by the musicians and the first words of the Narrator, Passing Strange is a riveting, glorious evening of music, dance, poetry, song, and very, very fine acting. It is a rock 'n' roll concert, a play, a coming-of-age story, a peek into underground cultures in late 1970s America and Europe, and a study of philosophical and moral questions about truth, love, and reality that are asked by and struggled through anew by each generation. It is hilarious and heartbreaking, a brilliantly written semi-autobiographical tale by the artist, Stew. A mélange of his poetry and prose, melodic songs, and music (with Heidi Rodewald), it is voluptuous and strikingly beautiful, comic, goofy, and insightful—a joy to hear and delight to see.

Director Lorna C. Hill has gathered a slate of very talented musicians and actors and uses every inch of the large stage to great effect, with actors dancing right to the edges, rolling on the floor and leaping in the air, creating a dynamic and immediate experience for the audience.

Led by Music Director and keyboard maven, Michelle Thomas, the stellar band has a lush sound that never overpowers but always enhances the experience.

Brian Brown has terrific kinetic energy as the Youth. His slender frame sometimes seems boneless his movements are so fluid. He has an impish quality with occasional deadpan and always revealing facial expressions, as he grows from a Zen-drenched adolescent to a young music artist haunting the clubs and cafes of bohemian Europe.

Preach Freedom’s tall and lean Narrator, the older and wiser red-sneakered embodiment of that youth, has a soft, melodic voice that is also powerful and compelling. His presence is sensual and graceful. He has great style, flawless timing, and gives an outstanding performance.

Jacqueline Cherry as Mother has great fun with dialect switches and her disdain for the “Baptist Fashion Show” that is weekly church. She has an earth mother quality in her love for her son, and her despair at his distance from her.

The other cast members each play several demanding roles.

Augustus Donaldson has a great time as the choir-boy son of preacher man London Lee’s exuberant Rev. Jones. He surprises with a stoner prayer group and then an older-than-his-years cynicism as he dejectedly speaks about the differences between being a slave and a coward. As Mr. Venus, the outrageous Berlin performance artist, he tears up the stage growling “What’s inside is just a lie. What’s inside is just a lie.” As the Youth’s Berlin lover, Desi, Zoe V. Scruggs shines in a role that is both passionate and compassionate. Tiana Livingston has a very fine moment as Marianna in the song “Keys” as she offers the Youth a place in Paradise. In addition to the preacher, London Lee is very German as Hugo. Other roles abound, all well-played by this multi-talented cast.

Ujima Company, Inc. has dedicated more than four decades to the "preservation, perpetuation and performance of African American theater." Passing Strange is the perfect opening show for its new home. During the opening night reception following the stellar inaugural performance, a sumptuous spread was offered, with a champagne toast by Lorna C. Hill to thank supporters and celebrate Ujima's past 41 years, its new home, the current production, and all that the future will bring.

You can see Passing Strange through May 26th. It is such an excellent production you won't even miss the champagne and fine buffet.