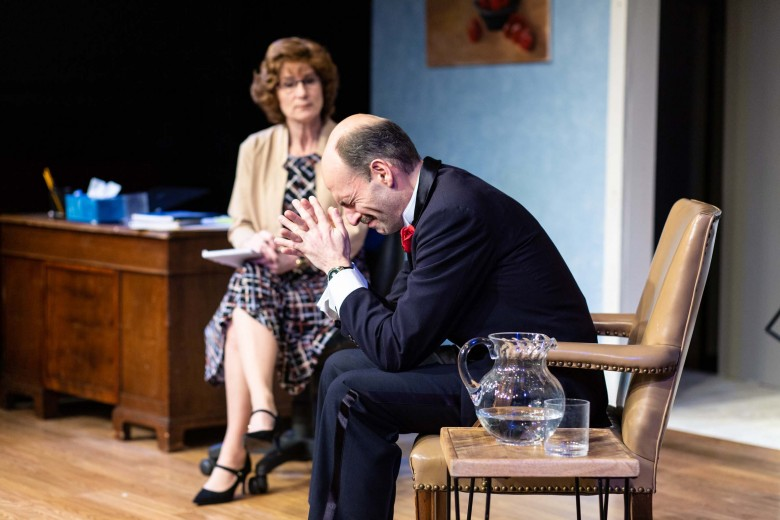 In Israeli playwright Anat Gov’s very smart, witty and insightful play, Oh My God! the Creator of All That Is (Todd Benzin) has been experiencing a dark night of the soul for about 2,000 years, give or take. As a last-ditch effort before He annihilates all of humanity, including the righteous man, He seeks therapy with psychologist Ella (Lisa Ludwig)—named after the tree, not the goddess—to sort out his feelings and make a final decision. She is the single mother of Lior, a mute, 12-year-old autistic boy (Max Goldhirsch) with artistic and musical skills, who appears at various times throughout this 90-minute treatise on religion, psychology, and humanity’s relationship with God.

Dressed to the nines in black tie and patent leather pumps (the reason for which is quite amusing), He is at first coy about who He really is. When Ella asks him, he replies, “I am Who I am.” She prods until He admits His true nature. She, of course, is somewhat skeptical as to His bona fides. When that is all settled, they get down to it, and duke it out about choices He has made that may have led to His depression. They spar with one another, citing chapter and verse from the Bible, which she has studied at length. She is at times compassionate, at times angry and critical, forcing Him to look at what His behavior toward humanity has wrought. He is defensive and unwilling to be reflective and tries to weasel out of taking responsibility, until they come to an understanding, but not necessarily a resolution.

Lisa Ludwig and Todd Benzin are excellent, their timing spot on. Neither has an inauthentic moment, with each expressing emotions that feel deep and real. In this dialogue-driven play, they have in-depth arguments about specific biblical stories, including Adam and Eve, Cain and Abel, and Job. They reveal personal histories, fears, hopes dashed and dreams thwarted while having intellectual discussions about biblical meanings, and God’s decisions regarding humanity. At times they are like two boxers circling each other, moving in to land a few punches, and then circling back out again. But unlike boxers, their goal is not to harm, but to unveil what is hidden that is causing such misery. They are engrossing, their acting skills a pleasure to see.

Max Goldhirsch as Lior, the autistic boy, plays the part very well. The play opens with him sitting on a chair in his mother’s office sweetly playing the guitar. His tantrum and vocalizing a few minutes later seem very real and not over-the-top, and each time he appears, he maintains that same sense of reality. Very nicely done.

The set by David Dwyer has the look and feel of a therapy office, with lighting by Brian Cavanagh adding to a sense of warmth in the room. Costumes are by Kari Drozd.

Founding Artistic Director Saul Elkin has chosen an excellent cast for this very sharp, intelligent play that is thought-provoking and full of heart.

Oh My God! is at Jewish Repertory Theatre through November 17th.