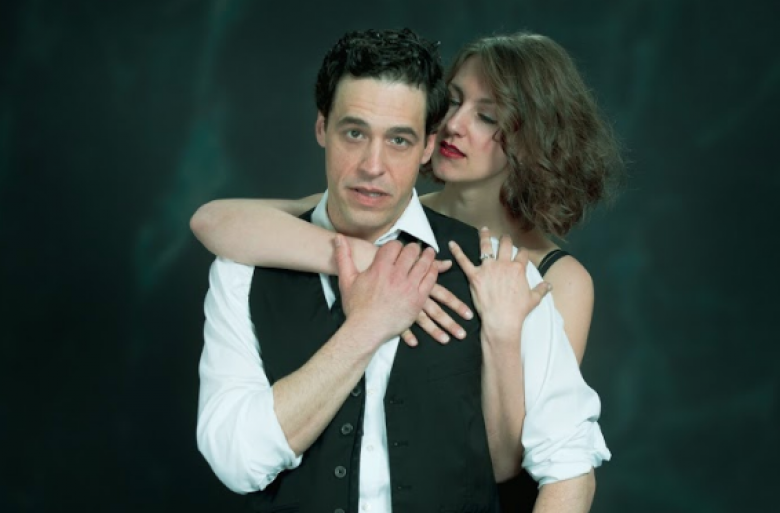 Second Generation Theatre Company has done it again, producing a big musical on the thrust stage of the intimate Shea’s Smith Theatre. Their production of Big Fish took the Outstanding Production of a Musical award at the Arties this year. They have excelled in this genre in the past in other venues with productions such as The Light in the Piazza and Into the Woods.

Brilliantly cast by Director Victoria Perez with 15 women, a man and a boy, Nine starts out strong and never wavers, each actor a perfect fit in his or her role. The staging is almost perfect for the space. There were a few times when those of us on the sides were unable to see the faces of actors during important moments as they were too far downstage. That aside, Ms. Perez uses Chris Cavanagh’s beautiful set with maximum efficiency and excitement, actors practically flying at times from upstage onto round set pieces that acted as steps, benches, beds, etc. The set is reminiscent of the one in 8-1/2, Federico Fellini’s semi-autobiographical, iconic 1963 film on which Nine is based. All white, with white draping, the set has a classic feel, as well as a feeling of being a part of ancient ruins.

Guido is a brilliant, self-obsessed and self-serving manipulator whose muse has gone mute in a perfect storm of personal and professional disasters. His last three “films-not-movies” had been eviscerated by critics and tanked at the box office. His wife, his mistress, and the star of his films have all become increasingly unhappy with him, as has the French woman who produces his films. Attempting to sort himself out, Guido decides to take the waters at a famous spa in Venice, going incognito. The press finds him almost immediately and all the women converge, those in the flesh and those who exist now only in his imagination. He is a bundle of neuroses, flooded with memories, both painful and exhilarating, of when he was nine and in thrall to the nuns, the Catholic church, and a wild woman played by Nicole Cimato in a stellar turn as the exotic and very erotic Sarraghina.

Ben Michael Moran captures the intensity of Guido’s misery, as well as some of the more comic aspects of his self-induced agony. He lets us know that he knows how absurd he has become, while at the same time making it clear that he remains caught up in his lies and self-delusions. His misery becomes palpable in Act Two, as the chickens come home to roost. Mr. Moran has a fine baritone, which he also carries into upper registers at times.

Aimee Walker is stunning as his wife, Luisa. She carries both depth and soul, two characteristics sorely lacking in the narcissistic Guido. In her song, “Be on Your Own,” she expresses both great love and great sorrow that only a woman of her maturity could achieve.

Lisa Ludwig is a hoot as the French producer Liliane La Fleur. In her number, “Folie Bergeres” she has the audience laughing as she tries to engage some of the men to—well...enough said about that. Charmagne Chi is right there with her in the hoot department when she plays Guido’s mistress in the movie he finally concocts. Arianne Davidow is sublime as the actress Claudia, her mezzo-soprano voice beautiful to hear. Mary Gjurich is also excellent as Guido’s Mother, loving, kind, and at times stern in her role. Max Goldhirsch, a middle-schooler, is very good as Little Guido. The ensemble and every member of the cast excels and all the accents are spot on.

There are many costume changes and many costumes, all expertly designed by Lise Harty, from gorgeous gowns to dirndls, spa uniforms, can-can dancers, and nun’s habits, to name just a few. Choreography by Lauren Nicole Alaimo is very lively and, because of the intimacy of the theatre, dancers high kick in very close proximity to the audience, creating excitement, as well as a measure of concern.

Note that the women are all in demonic black at the beginning, and in angelic white at the end. Perhaps there is hope for Guido after all.

Victoria Perez has assembled a great cast and crew. Second Generation Theatre Company has another excellent production to add to its growing body of work.

You can see Nine at Shea’s Smith Theatre through June 30th.