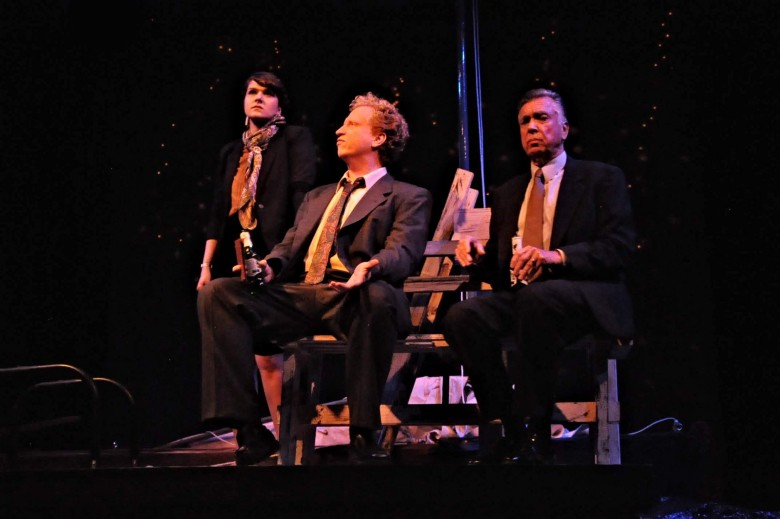 Navigators, part family drama, part mystery, part indictment of corrupt politics, guides its three characters through the treacherous waters of remembered childhood pain, family secrets, and insider politics with a steady hand on the tiller. This 80-minute play is rich in fast-paced clever and often witty dialogue as siblings E. J. and Maddy spar as only close siblings can in the boathouse at their recently deceased mother’s estate, where E. J. has taken up residence with a typewriter and a bottle as companions.

Set in the recent past, E. J. (Chris J. Handley) and Maddy (Sandra Roberts) are the famous children of a New England political dynasty. Their mother was a powerful Senator who left them to fend for themselves as children while she sought political power; their disinterested father died when both were young. The 30-ish siblings chose different life paths. E. J. was completely estranged from his mother and came home just days before she died. After a stint as a District Attorney, when he came to loathe mandatory minimum sentencing laws, he left it all behind to write potboiler detective novels that he himself says no one reads. Maddy remained in the fold, managing the Washington office of their Uncle Leo (Tom Owen) who is also a Senator from their home state.

As they duke it out in the boathouse, E.J. and Maddy play nautical literary games from their childhood, teasing each other between angry outbursts. He shows her a list of names that their mother gave him when she was dying that neither understand. Maddy finally admits that she wants him to run for his mother’s Senate seat in the upcoming special election. He is horrified at the thought of re-involving himself in the amoral political world he despises. Having a hidden agenda, she convinces him to take the boat out on the water and the two sail across the lake to meet their past and their future.

Chris J. Handley, also Alleyway’s Artistic Director, is masterful as E. J., deftly expressing the pain and grief of the neglected son and the passionate anger and self-deprecating humor of the disaffected man. He has command of the intricate dialogue, while also carrying himself as a person who, as the saying goes, is “half in the bag,” occasionally pouring himself a wee drop into a coffee mug while he and Maddy dissect their childhood and argue about their life choices.

Sandra Roberts is right there with him as Maddy, equally passionate about staying in the system in order to improve it, equally delighted playing their childhood games, and up to the challenge of the fast-paced dialogue. She is excellent as the younger sister who adores her older brother and at the same time is furious with him for opting out, while clearly having a mind and plan of her own.

Tom Owen as Uncle Leo had some problems with the dialogue opening night. His performance felt stilted and was not on the same level as the others. His lengthy monologue seemed more like a lecture than an expression of heartfelt anger and painful memories of childhood, which is also due to the writing, the only part of the script that seemed more preachy than conversational. The game Leo and E. J. play is somewhat confusing, too, which may have added to Mr. Owen’s dialogue issues. After all, how can a United States Senator be expected to be familiar with Gilligan’s Island?

Navigators is directed by the sure hand of Executive Director and Alleyway founder Neal Radice, who designed the sets, lighting, sound, and composed original music for the production. The music has a melancholy feel that is in keeping with the underlying feelings of the characters. There was a bit of an issue with the set as the boathouse initially refused to do its part and gradually recede from the stage when E. J. and Maddy took the sailboat out on the water. That aside, the technical aspects of the performance work well together. The sound of lapping waves adds a rhythm to the proceedings and the starlit sky behind the sailboat gives a sense of night sailing on calm waters.

Navigators sails smoothly through its 80 minutes with occasional choppiness that does very little to detract from what is a very well written, mostly very well-acted, very engaging and thoughtful evening of theater.

You can see the world premiere of Navigators at Alleyway Theatre through October 5th.