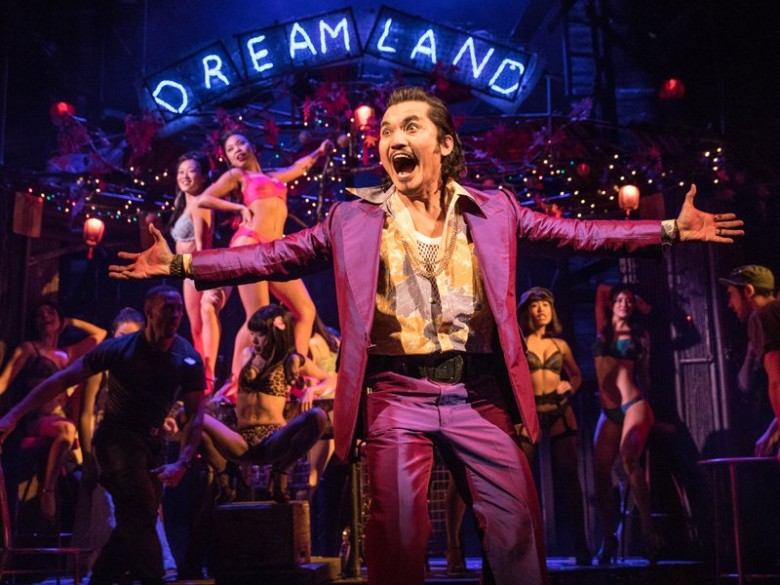 The most powerful images in Miss Saigon evoke a sense of horror at the cost of war to the people whose lives are disrupted and destroyed by it, while others, seen and unseen, profit greatly. The fall of Saigon in April 1975, depicting desperate people begging to get in at the gate of the U.S. Embassy while the last helicopter takes off from the grounds, is one such scene. We hear the screech of the motor and the whoosh of the rotors before we see its lights blind those on the ground while it hovers over the embassy lawn as the last Americans climb aboard and the machine flies off into the night, leaving the Vietnamese who worked with the Americans at the mercy of the victorious communist regime.

Miss Saigon is based on Puccini’s tragic opera, Madama Butterfly. Book and lyrics are by Alain Boublil and Claude-Michel Schonberg (the same team that created Les Miz), with additional lyrics by Richard Maltby, Jr. It is the story of star-crossed lovers, Vietnamese sex worker, Kim, and her soldier lover, Chris, who vow to be together during the last days of the American war in Vietnam. It speaks to opportunities and losses in a time of chaos, racial disparities, PTSD, the banality of sex-for-hire, and of war itself.

The lovers first meet at the seedy flesh bar “Dreamland,” run by an equally seedy man known as The Engineer. Played by Red Concepción, he is a ball of energy, ripping across the stage, smiling like the Cheshire cat, pandering to the American soldiers, selling the girls he “owns” to the highest bidder with his Miss Saigon contest. He is remarkable in this role, full of malicious vitality and impish salaciousness, while at the same time being almost likeable in a sleazy, comic manner. He is particularly creepy in the over-the-top number, “The American Dream.”

Emily Bautista as Kim and Anthony Festa as Chris both sing with passion and strength, and shine in their romantic duet “Sun and Moon.” During the show, Ms. Bautista's voice builds from that of the tentative, shy country girl in 1975, to the confident tones of a woman ready to risk all in 1978. Chris’s lament, “Why God Why?” speaks to the seductive power of corruption and his own moral ambiguity, a draftee who re-upped to participate in the spoils of war, and the potential consequences of that choice. They have great chemistry together, which adds poignancy to their love affair.

Choreography by Bob Avian can be provocative, as in the number “The Morning of the Dragon” by the Engineer and Company, which is a forceful and fascinating anthem that depicts the victorious People’s Army, with a huge gold head of Ho Chi Minh in the background as the dragon prances around in victory and the acrobats and soldiers celebrate in military formation. It is also very explicit in the bar scenes with simulated sex and the usual gyrations of strippers and pole dancers.

There is a great deal of flesh exposed in Miss Saigon, 99.9% of it female. The costumes by Andreane Neofitou are very explicit, but unlike the girls in The Kit Kat Club in Cabaret, they look all shiny and new, rather than being an expression of the tacky, seedy glitter one would expect in a place like Dreamland, and later the fleshpots in Bangkok.

The set looks to be constructed of bamboo, multi-leveled, with a hut that turns around to become Dreamland. It is shabby, dark, and has a sense of the furtive, while the lighting adds to the sense of things moving in the dark. Lighting is used to great effect in the production numbers, as in spotting The Engineer as he poses with a cigar in his mouth, turning him into a caricature of a little demon.

Miss Saigon is a tragedy that is both engaging and disturbing, a reminder of the huge cost of the Vietnam—or any—war on individual lives and the culture itself of the people affected. The elements meld together to create a sense of darkness and chaos. It is well-acted, with musical numbers that are, in turn, romantic, powerful, unnerving, amusing, or over-the-top salacious.

646 Main Street Buffalo , NY 14202
Experience the acclaimed new production of the legendary musical MISS SAIGON, from the creators of LES MISÉRABLES. This is the epic story of Kim, a young Vietnamese woman who works in a bar owned…
- Share this page -