Review: Man and Superman and Don Juan in Hell @ the Shaw Festival 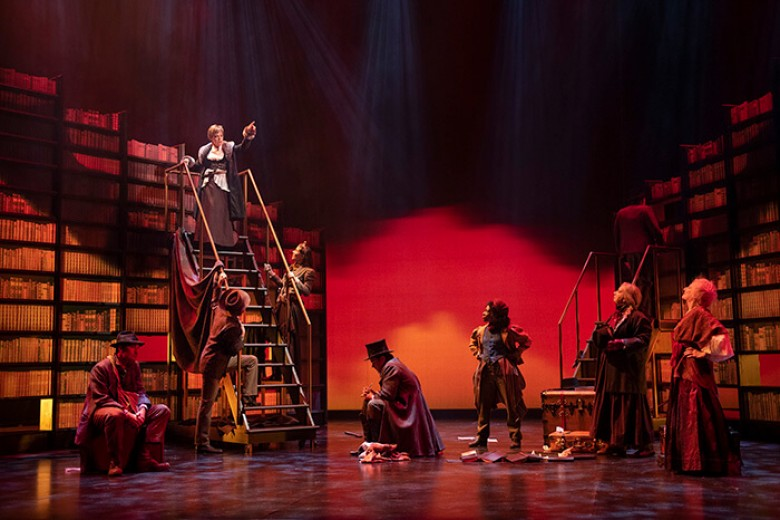 Words. Words. Words. Hundreds of thousands of them are spoken in George Bernard Shaw’s Man and Superman. In the 6-1/2 hour production now at the Shaw Festival, words even cascade down from the rafters on sheets of paper, like snowflakes gently falling from the sky. All those words coalesce into sentences that contain philosophical, political and religious questions about the evolution of mankind, Nietzsche’s concept of the “Ubermensch” or Superman, conflicting ideas about love and marriage, war and peace, and heaven and hell. And that is just the short list. Lest you fear that you will be confined for hours listening to tedious expositions on abstruse subjects, fear not. The biting satirical wit and wisdom of the masterful Shaw is on full display from beginning to end. He said of his longest play, “It is a grand opera in the middle of a musical comedy.” And that it is.

In Act I, after her father’s death, the lovely Ann Whitefield (Sara Topham) has become the ward of old and conservative Roebuck Ramsden (David Adams) and young free-thinking John “Jack” Tanner (Gray Powell). Tanner does not want the responsibility as he wants nothing that will tie him down, plus he believes Ann to be a conniving liar who will do anything to get her way. Ramsden, on the other hand, sees her as a sweet innocent. Octavius Robinson (Kyle Blair), desperately in love with Ann, is a pitifully romantic would-be-poet whose sister, the very sensible Violet Robinson (Courtney Ch’ng Lancaster), is at the center of a scandal. In Act II, Jack flees with Henry (Sanjay Talwar), the cockney driver of his automobile, for reasons that will not be revealed here. In Act III, ostensibly on their way to Nice, they are waylaid by brigands in Spain’s Sierra Nevada, whose leader, Mendoza (Martha Burns, who also plays The Devil), engages Jack in a lengthy conversation about socialism, anarchism, and whatnot. In Scene 2, in a dream sequence called Don Juan in Hell. Beyond Space. Beyond Time, Jack is in the character of Don Juan, while Mendoza assumes the role of The Devil, Ann is Doña Ana, and Ramsden is The Statue. Act IV ties up all loose ends.

Don Juan in Hell is often excised in productions or performed on its own, as the storyline can continue without it. However, it is also integral to expanding ideas brought to light in other parts of the play. Don Juan and the Devil argue and debate with input from Doña Ana and The Statue in Hell during an hour-long scene that skewers the traditional concepts of heaven and hell while delving more deeply into the Superman concept, the life force in relationships between men and women, and much more in an often hilarious tour-de-force of language and acting skills.

Gray Powell is outstanding as the fast-talking, passionate iconoclast, Jack Tanner. He delivers Shaw’s many, many lines with great aplomb, every word precise, every sentence clear. As Jack, his commitment to his beliefs is absolute and his irreverent sense of humor is delightful, as is his cluelessness about the true danger he is in. His counterpart, Sara Topham as Ann, who in Shaw’s turnaround of the Don Juan myth, is the pursuer rather than the pursued in the war between the sexes, plays her with just the right amount of sly intelligence, playfulness and charm. The two have a captivating chemistry that adds to the deliciousness of their interactions.

I did not once feel like the play was too long, or that it dragged in any way, quite a feat by Director Kimberley Rampersad in almost five hours of stage time. However, a couple of the choices that she made struck me as distancing the audience and creating distractions rather than immersing us in the dialogue and action. In the opening scene with Roebuck and Octavius in Roebuck’s study, they sing their lines at first in what seemed like a kind of homage to Rex Harrison/Henry Higgins/My Fair Lady. I thought "please don't sing the whole thing," and thankfully, they did not. Normal speech began after a few lines. Also, the actors often spoke directly to the audience. This broke into their focus on one another when their characters were fiercely debating each other and diminished the intensity.

That aside, the Shaw Festival production is first rate, with excellent acting by the entire cast, some fun special effects with fire, fog and lighting, a lovely tree growing through stacks of books in the garden in Act IV, and a script that is chock full of witty, hilarious lines interspersed with philosophical questions and forward-thinking ideas, some of which were shocking in the early 1900s, and most of which are still being debated today.

If you can get there for the limited run, do go. It is a great opportunity to see a fine production of Man and Superman in its entirety. And note: the Shaw Festival staff and volunteers have outdone themselves in providing an experience during intermissions and lunch that runs smoothly and efficiently.

10 Queen’s Parade Niagara-on-the-Lake, ON L0S 1J0
She wants to marry. He doesn’t. Bernard Shaw’s witty masterpiece hits the stage in all its pulse-racing glory. It is often done without its dazzling third act, Don Juan in Hell, but not…
- Share this page -