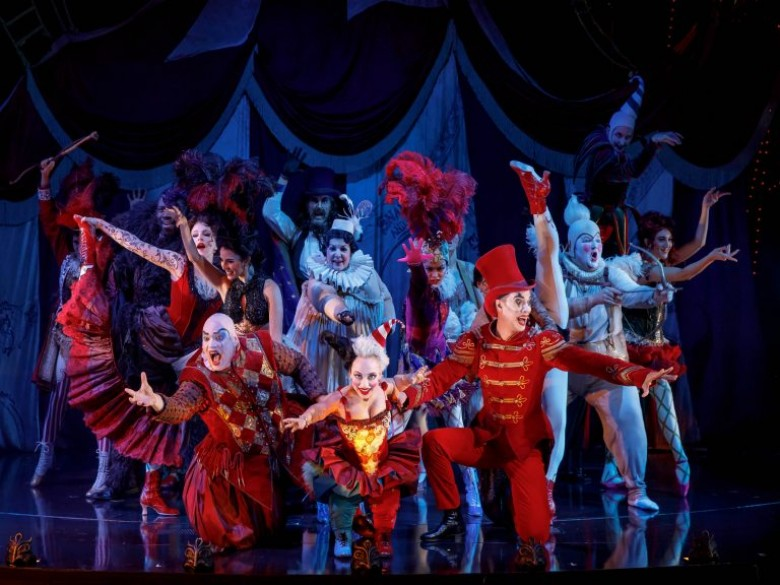 Love Never Dies, now at Shea’s Performing Arts Center, is the sequel to the juggernaut The Phantom of the Opera, with music by Andrew Lloyd Webber. It takes place ten years after the original on Coney Island, where the Phantom now controls a fairground attraction called Phantasma, having escaped his would-be captors in Europe with the help of Madame Giry and her daughter, Meg.

It is just after the turn of the 20th century, when horseless carriages are still a curiosity. The one that arrives to spirit away Christine and her family when they arrive from France is a curiosity indeed, built like a 19th century bicycle with a huge front wheel. It is one of many oddities--human, inhuman and inanimate--that populate the stage.

The carnival atmosphere is heightened by captivating, quirky sets and costumes (by Gabriella Tylesova) and strange characters that fascinate as they dazzle the eye. The trio of Fleck, Gangle and Squelch (Katrina Kemp, Stephen Petrovich, Richard Koons) act as bizarre masters of ceremonies, introducing the audience to the wonders of their weird, dark phantasmagoric world, cavorting and prancing about, swinging the diminutive Ms. Kemp into the air and giggling in a manner that makes the hair stand up on the back of your neck.

The lighting designed by Nick Schlieper provides an eerie Coney Island atmosphere, complete with roller coaster ride with which Love Never Dies aspires to thrill us. Mirrored obelisk-like structures light up to reveal carnival “freaks” inside.

All of this and more–a carousel, a dinosaur-bone-like structure that forms half of an arch around the stage along with metal rigging containing an evil eye at the top, create what is truly a Coney Island of the mind. Perhaps that eye is the Eye of Horus, as the unfortunate characters in Love Never Dies would certainly benefit from the Egyptian god’s protection.

The wild and weird costumes and sets cannot disguise what is a plodding melodramatic book by Ben Elton that is more soap than opera. The Phantom (played opening night by alternate Bronson Norris Murphy) and Christine (Meghan Picerno) both have beautiful voices and handle the musical numbers very well but are mired in a great deal of exaggerated angst, with capes and gown trains being swept aside while they suffer repeated dark nights of the soul. It is too much and too little at the same time.

Jake Heston Miller, as Gustave, is very strong as the ten-year-old son of Christine and Raoul (Sean Thompson), the dissolute Vicomte. Young Mr. Miller will alternate with Christian Harmston as Gustave. Karen Mason is at her Mrs. Danver’s best as Madame Giry. Mary Michael Patterson as the unhappy Meg does a fine strip in the Beach Girls number. She is very charming and the number is very much of the period.

The music is not compelling in the same way as The Phantom but is very well played by the orchestra. I particularly like the lyrics (by Glenn Slater) to “Dear Old Friend,” an amusing take on friendship gone awry. “Look with Your Heart,” with Christine and Gustave is very sweet. The big number, “Love Never Dies” seems overwrought, as do the characters singing it. The lyrics make one very wary of ever falling in love. On the other hand, Love Never Dies is about obsession and greed, not love, so it makes sense that the Phantom and Christine would share in the pain of what they call love.

While there are many entertaining moments and some terrific eye candy in Love Never Dies, it does not come close to attaining the excellence of the original. Perhaps it is unfair to compare the two. What is true is that, had Phantom had never been made, this musical would still have the same strengths and weaknesses.

646 Main Street Buffalo, NY 14202
This story of boundless love, full of passion and drama, follows Andrew Lloyd Webber’s The Phantom of the Opera, one of the most successful musicals of all time, which has now been seen by more…
- Share this page -