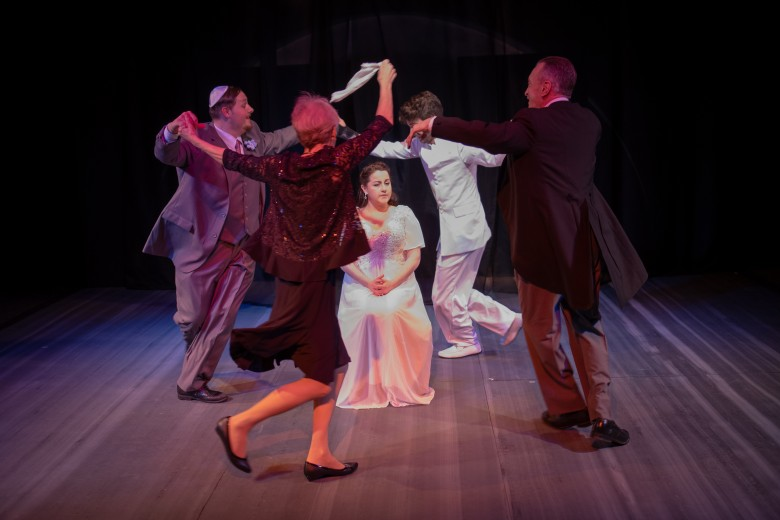 Looking Through Glass by Ken Kaissar is an updated version of an early 20th century Russian/Yiddish play by S. Ansky called The Dybbuk. In Jewish mythology a dybbuk is the malevolent wandering soul of a dead person that possesses the body of a living person until it accomplishes its goal, often purification of its sins, or until it is exorcised by a religious ritual.

Having its world premiere at Jewish Repertory Theatre, Looking Through Glass attempts to merge 21st century Brooklyn Jewish sensibilities with the very traditional rural Russian Jewish patriarchal culture to modernize the myth of the dybbuk.

In The Dybbuk, the young maiden Leah is forced into an arranged marriage. Her father chooses a wealthy man for her. She is in love with the impoverished Khanan who, upon hearing of Leah’s betrothal, falls dead. He becomes the dybbuk that inhabits Leah’s body at her wedding. At the end of the play, Leah chooses death and the lovers are united to spend eternity together.

In Looking Through Glass, Leah is a 31-year-old resident physician not yet betrothed to the wealthy Shmuel. When she meets the impoverished Jacob, they immediately fall in love. She then refuses to follow her heart and marry him. She chooses logic and reason, after a major guilt trip imposed upon her by her mother, Miriam, and will marry Shmuel instead for stability. Jacob commits suicide and becomes the dybbuk.

This is not a spoiler because the play begins with Jacob and Leah together in the afterlife, accompanied by a character named An-sky, who acts as narrator. They all speak about death directly to the audience, and then the story begins. As it unfolds, we already know that she will choose Shmuel because otherwise there would be no dybbuk and no eternity together in the afterlife, and so there is no dramatic arc to the play. Watching two people make life choices that are so clearly antithetical to their real desires is very different from seeing star-crossed lovers who are at the whim of fate, as in the tragedy of Leah and Khanan. Looking Through Glass has more of a melodramatic quality.

At the same time, there are some very fine moments in the play, as the myth of the dybbuk is a fascinating one, a window into Jewish mysticism and spirituality. Looking Through Glass discusses the concept of sin, and the purification of sins. It speaks to the consequences of going against one’s heart. It is chock full of Yiddish words and phrases and presents current traditions based on the ancient ones, and discussions about the purpose and importance of tradition.

David Lundy is a delight as An-sky, an old man walking with an unsteady gait as he slowly turns the pages of the little book he holds and addresses the audience in heavily accented speech about people dying before their time, dybbuks, and the purification of sins. He also plays a rabbi and Mordecai, Leah’s dead father.

Tina Rausa as Miriam has a beautiful monologue about love being a seed one plants and then nurtures into becoming a tree. She glows with love and wonder in that scene.

Angelo J. Heimowitz has the thankless role of the stereotypical rich, conservative Shmuel, a man of so little charm one wonders what Leah sees in him. He plays the role well for the most part and shows some backbone in his arguments with Jacob about politics—the pros and cons of immigration, and religion—Talmud vs. Kaballah.

Arin Lee Dandes and Zachary Bellus are the lovers. She opens strongly, addressing the audience about death in her lovely white wedding gown. He is very sweet as he charms her when they meet. However, and this is true for all the characters, they struggle with deeper feelings in the more dramatic painful moments.

Director Saul Elkin has chosen a bare stage in the black box theater, stating in a talkback that set pieces and props would impede the forward movement of the play and that it would work better “unencumbered by objects.” Sound designer Tom Makar works his magic with ancient-sounding music and eerie dybbuk reverb.

You can see Looking Through Glass at Jewish Repertory Theatre through June 2nd.

Days: Sun, Thu, Sat
Days: Sun, Thu, Sat
2640 North Forest Rd Getzville, NY 14068
World Premiere! After going against the wishes of her heart and marrying a man just to please her parents, Leah is possessed by the soul of her true love. Can an exorcism untangle their souls, or will…
- Share this page -