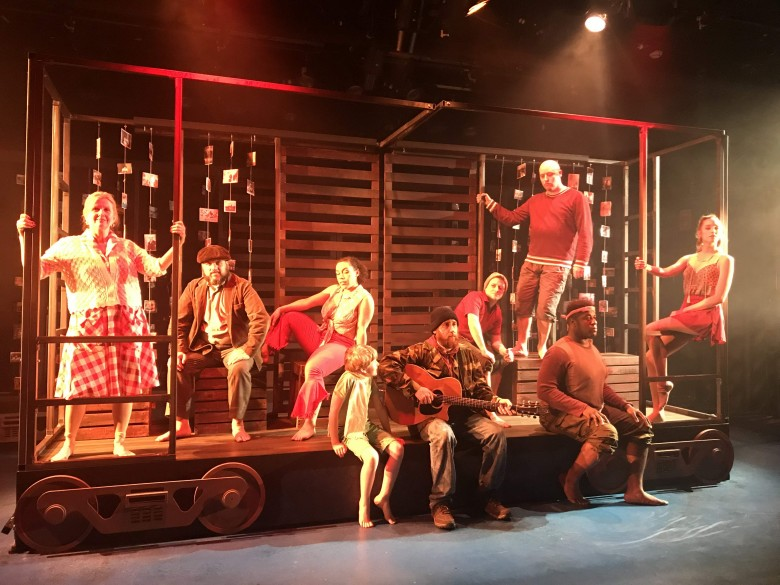 Grab your nearest electronic device and secure a ticket to see the world premiere of Late in the Evening: The World According to Paul Simon at MusicalFare Theatre.

Brilliantly conceived, choreographed and directed by Michael Walline, it is a journey in song, dance, and pantomime through dreams into the past love, joy, loss, and trauma of homeless veteran, Duncan, using the songbook of gifted lyrical songwriter/poet/musician, Paul Simon.

Beginning with the rousing opening number Kodachrome, which sets up the concept of exploring one’s past through photographs, to the last quiet refrains of Loves Me Like a Rock in closing, Late in the Evening is a beautiful, touching, and at times gut-wrenching homage to the life of one friendless man on the verge of self-destruction that also transcends the individual to reveal the joys, losses and longings of the collective.

Zak Ward (who is also Musical Director) is superb as the lonely Duncan. His voice, gritty at times, desperate, soulful, filled with heartbreak and sadness can then transform into a bright and exuberant expression of his early love of life. Costumed (by Kari Drozd) in heavy boots, dirty jeans, camo jacket and watch cap, with a ragged beard, he is the picture of the homeless vet, with his guitar and worn photos of loved ones his only possessions. He radiates the misery of a man without hope in I Am a Rock and Insomniac’s Lullaby as he wanders around a railyard. He finally falls into sleep leaning against a boxcar and is visited by a spirit child (Noah Bielecki as The Boy), who silently guides him on the journey through his life picture by picture, starting at school.

Timmy Goodman as Young Duncan and Sean Murphy as Julio show off their acrobatic dance abilities in the lively Me and Julio as they rough and tumble with each other in the schoolyard. Later, in Vietnam, Young Duncan writhes in anguish, tearing at his head as if to forcibly pull horrific images from his mind, while Julio is shot and falls to the ground over and over in a choreography of pain and death. Very powerful images very well done by the two men.

Dudney Joseph, Jr. is great singing the upbeat Call Me Al to his draftee buddies, exhibiting quite a talent for body percussion, too. In Act 2, now also a homeless vet and conveying a feeling of innocence, he quietly sings the gentle and contemplative Question for the Angels to the equally adrift Duncan.

Terrie Ann George is The Guide who encourages The Boy to approach Duncan. Her voice is clear and lovely singing The Teacher.

Dominique Kempf’s voice and movements are sultry and sexy as the Mystery Woman who explains the 50 Ways to Leave Your Lover to the inquisitive Duncan.

Emily Prucha is The Girlfriend who battles with Duncan in You’re the One. She is all grace and sensuality in her dance with Julio as Duncan laments in She Moves On.

Bob Mazierski has a smaller role as The Father, who sings the quirky Renee and Georgette Magritte… to his son.

And fifth-grader Noah Bielecki as The Boy speaks not a word until the final song. He skillfully and charmingly expresses himself through pantomime and dance.

The set by Lynne Koscielniak is two halves of a wood-slatted boxcar that is the conveyance that propels Duncan through the significant events of his life, as well as offering climbing opportunities for the dancers. Long strings with old photos clipped to them form several of the sides of the boxcar.

Lighting and sound by Chris Cavanagh are very effective, as with the sounds of an airplane in Vietnam as the soldiers parachute to the ground, and the spotlights that move quickly from one group to another.

There are only two words of dialogue in Late in the Evening. Paul Simon’s songs, so evocative and powerful, are a brilliant choice to tell a life story as they speak to everyday experience, to the joys of life, to its mystery, its grief, and to the longings and desires of the human heart. The stunning choreography and expert musicianship meld beautifully with the songs to create story and mood in an unforgettable theatrical experience.

You can see Late in the Evening at MusicalFare Theatre through May 26th.

LATE IN THE EVENING: The World According to Paul Simon