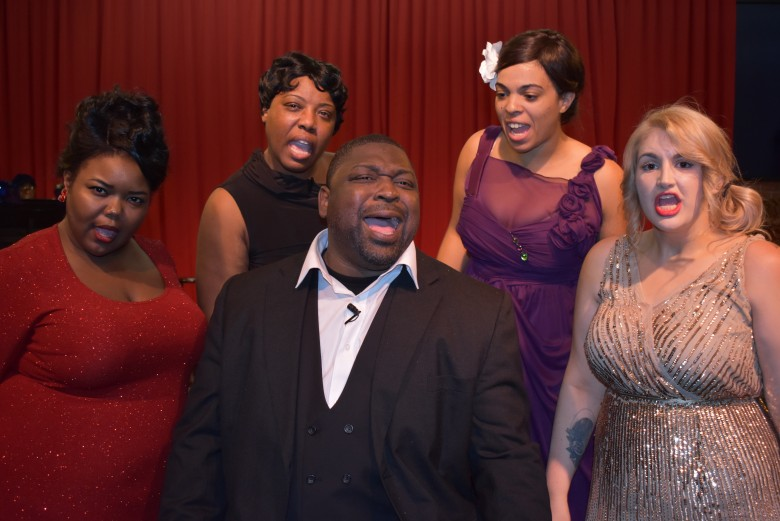 Alto saxophone player extraordinaire Charlie (Bird) Parker’s flame burned brightly during the 1940s until his death at the age of 34 in 1955. He and trumpeter Dizzy Gillespie created the bebop form of jazz. He headlined at the 1949 opening of a nightclub on Broadway, which was named Birdland as a tribute to him. The man was a musical genius who never managed to conquer his personal demons. An alcoholic and heroin addict, he died in a hotel room in Manhattan of complications from pneumonia and the long-term effects of substance abuse. The ladies in Ladies Swing the Blues have more poetic ways of describing his death: “Bird riding a fast train to a slow death” and “Jazzmen die a mystery.” However you describe his demise, Bird left a legacy of brilliant musical composition and performance, celebrated in the fast-paced and musically exciting Ladies Swing the Blues.

Subtitled “A Jazz Opus Folklore in the Key of Swing,” Ladies Swing the Blues is part biography of Parker and speculation about his death, part jukebox musical, and part jazz history. With original book and lyrics by Thomas W. Jones II, who also Directs and Choreographs, and original music by William Knowles mixed in with well-known jazz tunes, the show creates a Cliff Notes history of the 1930s, '40s and '50s world of jazz, particularly bebop.

The action takes place at Birdland the night after Parker dies. Four famous jazz singers gather to reminisce about his life, their own lives, and sing him a melodious goodbye. Ella Fitzgerald (Brittany M. Rumph), Sarah “Sassy” Vaughan (Latosha Jennings), Billie Holiday (Lily Jones), and Peggy Lee (Kacy Lynn Carbone) are the ladies who speculate about Parker's death, laugh, argue about who had it worse growing up, dish about the men in their lives, talk about their own demons and sing, sing, sing. Parker himself appears in the person of John Campfield.

The show is 90 uninterrupted minutes of music, storytelling and song. Musical Director and pianoman Frazier Thomas Smith gathered a stellar group of musicians who expertly perform the fast tempo and complicated rhythms of bebop and other forms of jazz. Ben Levitt is on bass, Quentin McCauley on saxophone, Jeremy Nesbit on trumpet, and Abdul Rahman Qadir on drums. Their sound is a central character in the show, integral to the story and the truest expression of just who Charlie Parker was.

For the most part, the women do a first-class job of interpreting their characters without trying to imitate them. Ms. Rumph does fine work expressing the persona of Ella Fitzgerald, interpreting “Round Midnight,” and her scatting is a delight. Her performance is very strong, as is Lily James’ who, with a gardenia in her hair, plays the heroin addict Billie Holiday. Her stoned expression and movements, and expertly performed song, “Billie’s Blues,” bring to life the talented and sad chanteuse. Latosha Jennings is sassy indeed as the in-your-face-Sarah Vaughan. She has a great voice and sexy style. Her mike was too loud at times, which gave an unfortunate screechy tone to that very fine voice. Kacy Lynn Carbone’s voice and acting ability are not as strong as the other women, but she did well with her interpretation of the soft-voiced, sultry Peggy Lee. She also played the Rothschild Contessa who was with Parker when he died and had some fine moments as that well-bred woman who loved bebop.

Mr. Campfield’s performance as Parker is somewhat uneven. He has great energy, but was difficult to understand at times, racing through lines, and not speaking clearly. However, he also was very expressive in his sadness about the death of his daughter and made a convincing drunk, careening around the theater in a stupor, and later sitting in the hotel room before his death looking frightened and worn out.

The book by Mr. Jones II focuses on the inner lives of the women and their history. The argument between Ella and Billie about who had the worse childhood tells a tale of abuse and neglect that informs the brilliance of their musical abilities. The show is a thumbnail history of jazz, particularly bebop, and a look at some of the people who fell in love with it, Beat writer Jack Kerouac among them.

The Birdland set by Artistic Director Paulette D. Harris works very well. Café tables are scattered around the stage and theater, and a huge Birdland sign is projected onto a red curtain at the back of the stage. The elegant hotel room is set on a platform stage left with the band on the floor stage right, leaving the center open for ease of movement and dance. A very large picture of the gorgeous Billy Eckstine that the ladies salivated over inexplicably remained on the wall throughout the funeral scene, like a guest who stayed too long at the party. Jasmin Everhart has costumed each of the ladies to fit their personas, Ella in a bright red sparkly gown, Sarah in black satin, Billie in a flowing purple gown, and Peggy in bejeweled white.

While there are a few technical and acting issues, Ladies Swing the Blues ultimately delivers a swinging 90 minutes of outstanding music with 24 new and old songs. It is snappy and exciting. If you like jazz, this is the show for you. You will be dancing in your seat, along with your fellow attendees.

You can see Ladies Swing the Blues at the Paul Robeson Theatre through October 13th.