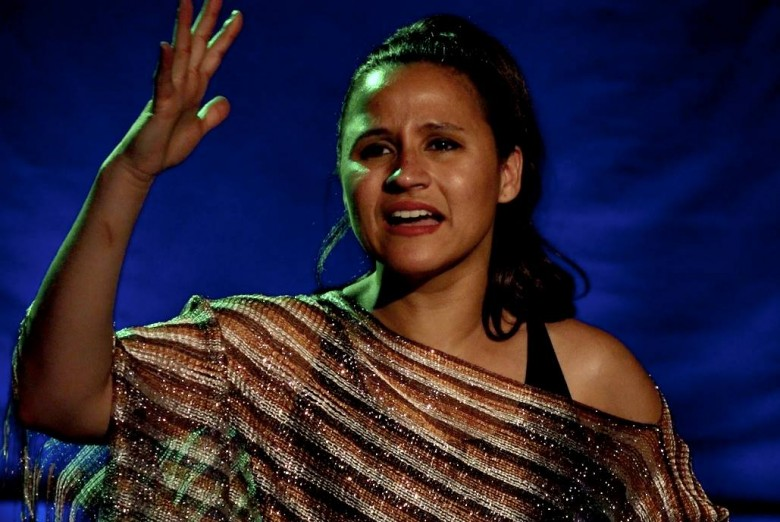 Melinda Capeles. A name to remember if you are a WNY theatergoer. Any time you see that name on a program run, do not walk, to see whatever play or musical she is gracing with her presence. Currently, she is La Lupe at the Manny Fried Playhouse in a production by Raices Theatre Company of La Lupe: My Life, My Destiny written by Carmen Rivera. I watched videos on YouTube of La Lupe performing before seeing the musical based on her life. Ms. Capeles is not just playing La Lupe, she is channeling La Lupe in a performance that is riveting from start to finish.

La Lupe, a Cuban singer, was the most popular Latin soul singer in New York City for much of the 1960s. The musical is an abridged story of her life from the time she first performed in Cuba until a few years before her death at age 52. She was known for her very passionate performances, tossing her shoes and jewelry while singing and dancing in an almost trance-like state. She was a practitioner of Santería, an Afro-American religion of Carribean origin that included trance states to communicate with ancestors, dance and drumming, among other practices. Throughout the musical, La Lupe communes with the saints and an ancestor; they are an integral part of her life and belief system.

In the musical, La Lupe, now middle-aged and taking a university class, explains to her disbelieving professor that the paper she handed in is truly her biography. Ms. Rivera’s script takes us through through La Lupe’s ups and downs, her star rising and falling in her personal and professional life. Ms. Capeles tells her story with burning passion and delightful humor, in English and Spanglish. Her body language, facial expressions, and movements are intense and alive, while at times she seems as light as air. Her voice is very strong and more than up to the task of expressing deep emotion. The songs are almost all in Spanish, yet for those who do not speak the language, Ms. Capeles’ expressive rendering of them leaves no doubt as to their meaning.

The sparse stage is set with a lone microphone downstage, the backup band on a platform upstage, and a white backdrop that occasionally lights up with stars. A table with a phone and a rack that holds scarves and a coat, along with some sparkly fabric draped on either side of the stage complete the simple set by Rolando E. Gomez, which works very well. Nothing gets in the way of the star and the musicians.

The three musicians backing Ms. Capeles deserve a review of their own, but I must leave that to writers more musically adept than me. In layperson’s terms, the musicians are superb. They rock the house. Joey Gonzalez is Music Director and on Percussion. Hansel Herrera Deschapelles is on Trumpet. Jeremias Soto is on Keyboard. They are very, very talented.

The supporting cast play many different roles. Rolando Martin Gomez is very good as Tito Puente, who La Lupe worked with for six years. He shows enthusiasm for her work, frustration with her stubbornness and aggressive behavior, and then empathy for her at their parting. Steve Brachmann is a hoot as the recording studio executive and does a fine strip as Dick Cavett. Smirna Mercedes-Perez, Dewel Perez, and Maria Perez-Gomez round out the cast of all Raices ensemble members.

Victoria Perez is the expert director of this high energy, high-powered jukebox musical. Not a song or a scene drag on too long. The opening scene on the subway train is both amusing and presages things to come. Very cleverly done.

Ms. Capeles lights up the stage. The band is beyond excellent. The story is compelling. La Lupe: My Life, My Destiny is onstage only until June 10th. The performance I saw was sold-out, so make your reservations immediately.

La LUPE: My Life, My Destiny

255 Great Arrow Ave. Buffalo, NY 14207
La Lupe: My Life, My Destiny recounts the meteoric rise and fall of one of Latin America's most iconic signers; La Lupe. In this play with music we are invited to share La Lupe's memories as she proves…
- Share this page -