Review: Harper Lee's: To Kill a Mockingbird @ The Kavinoky Theatre 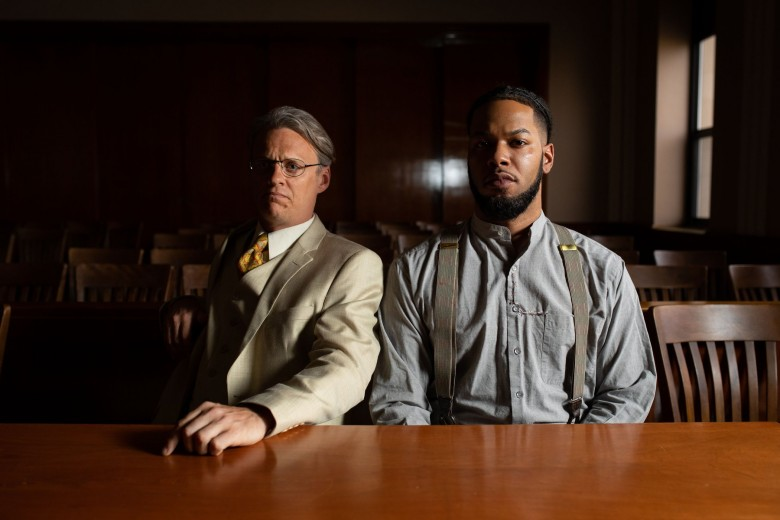 In a superb production of a brilliant, thought-provoking adaptation by Aaron Sorkin, The Kavinoky Theatre and Director Kyle LoConti have dotted all their i’s and crossed all their t’s, creating a must-see evening of riveting theater in Harper Lee’s: To Kill a Mockingbird.

The book To Kill a Mockingbird, published in 1960, won the Pulitzer Prize in 1961. The 1962 movie starred Gregory Peck, who won the Oscar as Atticus Finch, the rural Maycomb, Alabama lawyer who reluctantly agrees to defend Tom Robinson, a Negro man accused of raping a white girl, Mayella Ewell, in 1932 during the depths of the Great Depression. Narrated by Atticus’s daughter, Scout, as the trial and events surrounding it unfold, the book has been part of high school English curricula for decades, with more recent backlash regarding the book’s language and depiction of racism. The production now at The Kavinoky is the same one that is currently selling out on Broadway.

Mr. Sorkin, creator of The West Wing among many other award-winning credits, has maintained Harper Lee’s style, adding his own more modern sensibility and wit, molding Atticus Finch into a much more complex character, and giving more voice to the two African American characters, Tom Robinson and the housekeeper, Calpurnia, and to the racist Bob Ewell and his daughter, the much abused Mayella.

The themes in the play are of racism and class differences so deep that they preclude meaningful dialogue and mutual understanding. It questions whether one can and should maintain respectful behavior toward people whose vicious hatred is anathema to one’s own belief system. It points out the insidious sense of supremacy that can creep into the words and actions of even the most liberal of white people. The play explores all of this and more on a very personal level with characters that are finely drawn and bursting with life in all its complexity. The dialogue is smart and the language is raw.

Chris Avery is outstanding as Atticus, embodying a man whose firm principles about justice and respecting others are shaken to the core as he comes face-to-face with his own rage, sense of entitlement, and rigid values. From his quiet conversations with his children and his gentle sense of humor, to his impassioned defense of Tom Robinson and his outburst of fury at Bob Ewell, he never misses a beat.

Scout is the principle narrator. As played by Aleks Malejs as both adult and child, she is a smart, perceptive woman who is skeptical about the conclusions made about the night she and her brother, Jem (Michael Seitz), were attacked; and she is a smart, perceptive tomboy who tags along after her older brother. She tells her tale in a relaxed drawl that belies the strength she has that holds the attention of her audience. Jem, on the cusp of manhood, and their friend Dill (Jacob Albarella), the lonely, chubby, wise little boy next door assist in the narration and are very fine as both the adult and child versions of these characters.

The large cast of 16 are on point throughout. Patrick Moltane is so smarmy as the lowlife Bob Ewell, the slime almost drips from him as he explains white superiority or gives evidence in the trial. He never flinches from being the mean drunk who has a grudge against the world and intends to make it pay. Robyn Baun gives a terrific performance as Mayella, portraying just the right amount of fear, anger and stubbornness of the young woman who has been abused her whole life. Shanntina Moore plays Calpurnia as a strong woman who takes Atticus to task and teaches him a thing or two about racism. She has some amusing interactions with him about being “passive-aggressive." Xavier Harris carries himself with great dignity and displays his intelligence and understanding of his chances in Alabama’s justice system as Tom. Ray Boucher is excellent as the good-old-boy prosecutor, Mr. Gilmer, who taunts Tom into admitting the real reason he helped Mayella the day of the incident. David Lundy brings a touch of humor and pathos as the town drunk, Link Dees. Peter Palmisano is a very dignified Judge Taylor, with a dry sense of humor tossed in. Paul Maisano, Marie Costa, Mary McMahon, Kevin Kennedy, and John Profeta round out this stellar cast.

Kudos to everyone involved in Harper Lee’s: To Kill a Mockingbird at The Kavinoky Theatre through December 8th.

Harper Lee's: To Kill a Mockingbird