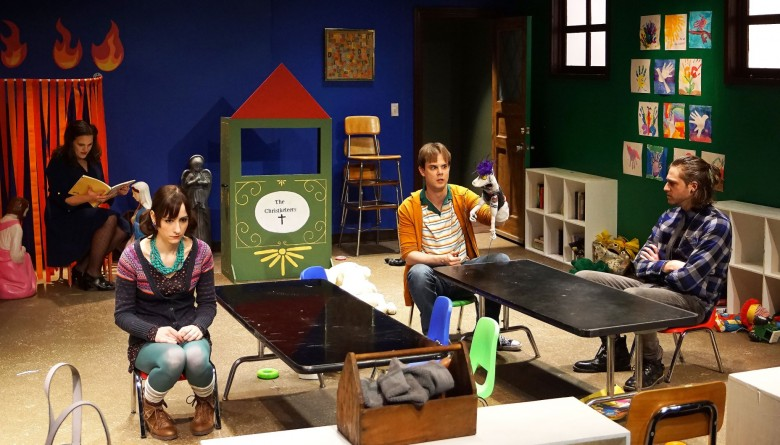 A foul-mouthed little devil has taken up residence in the form of a sock puppet named Tyrone at Road Less Traveled Theater in the riotous comedy Hand to God. If you like your comedy broad, biting, irreverent, and so funny you can barely stand it, Tyrone will be creating havoc there just for you for the next four weeks on the hand of Dan Urtz, who astonishes in a flawless performance as the adolescent Jason in thrall to the little demon.

Written by Robert Askins, Hand to God explores in a wildly funny fashion the concepts of good vs. evil and the divided self, sexual repression and the rather startling repercussions of that issue, as well as the pain inherent in the mother-son relationship. The play won an Obie award, was nominated for a Tony, and was named the “the most entertaining show of 2014,” by The New York Times.

The play opens with a spotlighted Tyrone providing the audience with his version of the Christian creation myth, with emphasis on the concept of good and evil, he being an expert on the latter. The action moves to a preschool classroom in the basement of a Christian church in Cypress, Texas, where a puppetry class (The Christketeers) is being held for several high school students by the recently-widowed mother of Jason, Margery (Jenn Stafford), a good Christian woman who is wrapped very tight and just about ready to explode. Another student, the cool-dude Timmy (Henry Farleo) harangues the shy, devout Jason and his not-yet possessed puppet, and ogles Margery and fellow student, Jessica (Maura Nolan Coseglia), while he manipulates two Barbie dolls into carnal positions. Jason is smitten with Jessica but is too shy to speak up, whereupon Tyrone begins to take over. In a hilarious take on Abbott and Costello’s Who’s on First fueled by the now devilish Tyrone, Jason amuses Jessica, and Tyrone becomes more powerful. Pastor Greg (John Kreuzer) has an eye for Margery, who it turns out has an evil eye for… well, that would be telling. Suffice it to say that all hell breaks loose, and not just metaphorically.

At the center of all the mayhem is the sock puppet, Tyrone, brought to life by Dan Urtz in a tour de force performance that dazzles in its complexity and dexterity. He effortlessly switches from the soft-spoken Jason to the deep-throated, rageful demon, while handling the puppet's very precise, often obsene, motions and throwing himself around the stage with Tyrone raging on the end of his arm, forcing him into situations out of his control. Outstanding.

The entire cast shines. Jenn Stafford's Margery almost explodes with pent up rage and stifled sexuality; when she erupts, she practically bursts into flames. Henry Farleo is all teenage hormones as the aggressive Timmy, yet also displays a youthful naiveté that is endearing. Maura Nolan Coseglia plays the sweet and wise-beyond-her-years Jessica with aplomb. She adeptly handles her large-bosomed puppet, Jolene, and is delightful interacting with the shy Jason. John Kreuzer as pastor Greg has only a little of the oily preacher vibe in his pursuit of Margery, and shows some grit when he confronts Tyrone, crucifix and bible in hand.

Kudos to Director John Hurley and his production team. Dyan Burlingame's set is a perfect church basement classroom, with colorful child-sized tables and chairs. Props Master Diane Almeter Jones has assembled a plethora of toys and stuffed animals for the room and added some unorthodox touches. Adam Kreutinger designed the terific puppets. Fight Direction by Adam Rath is realistic and somewhat bloody.

Be aware that language is no-holds-barred, but who could not love a play that stars a wicked little demon and sports a bobblehead Jesus? Kudos to everyone involved in this excellent production.

Hand to God is at Road Less Traveled Theater through March 29.