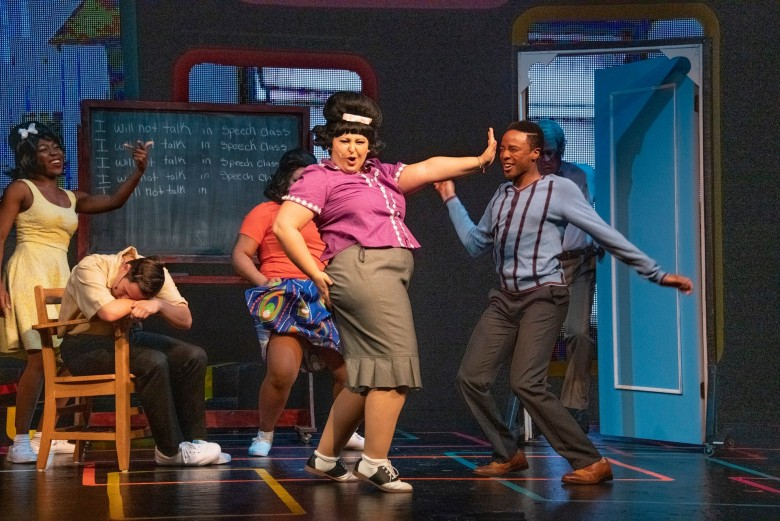 Kavinoky Theatre opened its 40th season with a sold-out show for the camp musical Hairspray, which was followed by a tribute to founder David Lamb that included a short history of the Kavinoky and its importance in assisting subsequent fledgling theaters in the community. Then there was a party. All in all, a very satisfying evening.

Hairspray, the witty, satirical musical based on the John Waters 1988 film, won eight Tony awards in 2003 including Best Musical. Set in Water’s hometown of Baltimore in 1962, it tells the story of plump, bee-hived hairdo'd adolescent Tracy Turnblad (Maeghan McDonald) in her quest to become a star on the after-school TV teenage dance program, The Corny Collins Show, meet her heartthrob, fellow teenager Link Larkin (Jamil Kassem-Lopez) there, and integrate the segregated show. The show has Negro Day, hosted by Motormouth Maybelle (Lorenzo Shawn Parnell), one day a month. Tracy is stymied by racist producer Velma Von Tussle, the former Miss Baltimore Crabs, (Natalie Slipko) and her daughter, Amber (Cassidy Kreuzer), who is in love with Link. Down but never out, Tracy finds her way onto the show, assisted by fellow-detentionee (Tracy is sent to detention for her “monumental hair don’t”), Seaweed J. Stubbs (Brian Brown), a Negro boy–remember, this is 1962 Baltimore. He teaches her dance moves that catapult her onto the show when Corny (Marc Sacco) sees her dancing at the Sophomore Hop and invites her to join The Council of teenagers on his show. Then there’s the falling in love and integrating part.

The Kavinoky production, Directed and Choreographed by Carlos R. A. Jones, hits many of the high spots and has a few misses. There was some sluggishness in the first act, with a few actors reaching for lines. Velma and Amber, who are written as caricatures, seemed over the top at times even for caricatures. They are almost too grating. My companion and I had partially obstructed seats during Act I, so moved to surprisingly empty seats across the aisle for Act 2. They were closer to the musicians, who are excellent, but the increased sound drowned out some of the dialogue and lyrics onstage.

That aside, there is a great deal to enjoy.

Mr. Jones’ choreography (assisted by Kelly Copps) is great fun. Almost past sock hop, but not yet psychedelic, the Jitterbug, the Twist, and especially the Madison, the line dance so popular in Baltimore at the time, capture the dance moves and energy from the early '60s.

The costumes and wigs are an integral part of this musical. Costume Designer Andrea Letcher has done a wonderful job. I particularly like the gorgeous colorful suits for the boys in the finale that complement the dresses of the girls. Motormouth’s ensembles–all with gold lamé at least somewhere–are terrific. And the bee-hive wigs are hilarious.

The large cast generally does a fine job with the material and choreography. The high-schoolers' adolescent vitality is exciting and gets the blood pumping. And the adults have their moments, too.

Maeghan McDonald is excellent as the ever-optimistic Tracy. She sets just the right tone of earnestness and teenager-in-love angst. She is so bright and happy in the opening number “Good Morning Baltimore,” and very funny mooning over Link in his song “It Takes Two.”

Lorenzo Shawn Parnell is outstanding as Motormouth, owner of a record shop and host of Negro Day. He commands the stage when he sings “Big, Blonde, & Beautiful,” and expresses great depth of feeling in “I Know Where I’ve Been,” the show-stopper in Act 2. He has some of the funniest lines, too. “If we get any more white people in here, we’ll be a suburb” is just one of many.

Billy Lovern plays Tracy’s agoraphobic mother, Edna. He struggled with lines at first and his voice did not carry well at times. However, he is very sweet as the shy Edna, and has a delightful number with husband Wilbur (the excellent John Fredo), “You’re Timeless to Me.” And he showed a lot of moxie in supporting Tracy.

Brian Brown has all the moves as Seaweed. He is very sexy as he pursues Tracy’s timid best friend Penny Pingleton (Arin Lee Dandes). Anne De Fazio is a hoot in several roles, as is Kevin Kennedy. Jamil Kassem-Lopez as Link could have channeled a bit more of his idol, Elvis, in his part, but generally did a fine job, as did the entire cast.

The set, designed by Paul Bostaph, with its giant cans of hairspray on both sides of the stage, works very well. Video screens on the back wall, designed by Holly Johnson and Brian Milbrand, are effective in highlighting early '60s culture. Musical Direction is by Allan Paglia.

Hairspray skewers the racist, segregationist culture of the early '60s, while celebrating the exuberance and commitment of its youth to change negative perceptions and include all people. It is a delightful evening of song and dance, with some very unusual and entertaining people, a la John Waters.

You can see Hairspray at the Kavinoky Theatre through October 6th.