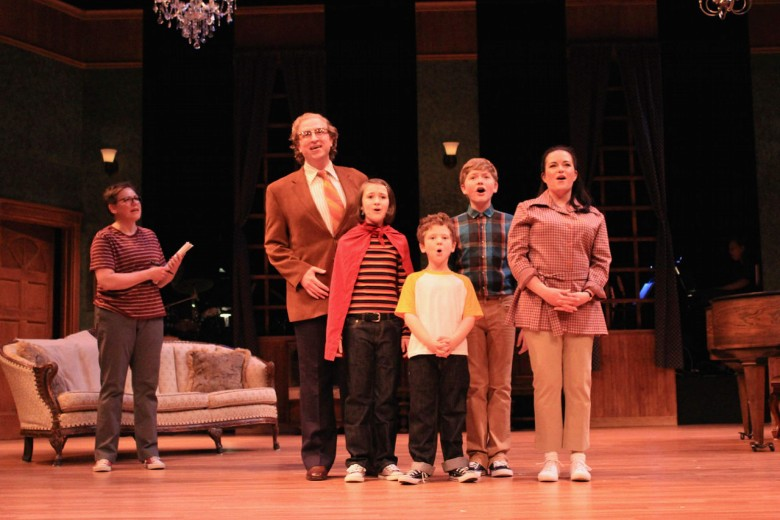 Based on a graphic novel memoir by Alison Bechdel, Fun Home is the 2015 Tony award winner for Best Musical. In a superb production by MusicalFare Theatre at Shea's 710 Theatre, it captures the mystery, confusion, beauty, sweetness, joy, and pain of family and the coming of age of a young lesbian in a series of vignettes that are wondrous in their seemingly simple yet powerfully complex nature. Individually, they sparkle with wit and joy, disturb with undercurrents of shame and disappointment, shock with bursts of rage. Taken as a whole, they define the life of a family that is at once unique and universal.

As middle-aged successful writer/artist Alison creates a graphic memoir of her coming of age, with emphasis on her relationship with her complicated homosexual father who she adored, she narrates scenes from her childhood and first year in college as her father’s affairs with men and sometimes underage boys, threaten the family, and his inability to deal with his troubled mind ultimately tears it apart.

The three actresses playing Alison are so in synch with one another, they truly seem like one person in different stages of life.

Fifth-grader Jane Hereth literally soars as young Alison, sporting a Dutch boy haircut and a red superhero cape as she flies on her father’s arms and feet. She is very talented, capturing the freedom, joy, wonder, and confusion of childhood, as well as the pain. She shines in her song “Ring of Keys,” which speaks to her developing awareness of her attraction to women. She never does too much or too little but always gets it just right.

As college student Alison, Renee Landrigan embodies the hesitancy, fear, and excitement of a young woman opening fully to her sexuality. In her ragged bell-bottom jeans and loose-fitting striped shirt, she knows this is her time, yet cannot quite bring herself to fully embrace her desire—until Joan (an in-your-face, but very kind LauRen Alaimo). Joan is an already-out lesbian who Alison meets the first time she tries and fails to enter the Gay Union meeting at the college. But then later…oh, then Joan kisses her and after their night together, Ms. Landrigan explodes into a glorious expression of joy and wonder in her song “Changing My Major.” Quite wonderful.

Robyn Lee Horn is excellent as successful middle-aged artist Alison. She is the glue that holds it all together. Her desire for her father to “get” her when she learns of his homosexuality is heart-rending. “Telephone Wire” is almost a dirge as she comes to realize that he lives exclusively in his own world.

Chris J. Handley is excellent as the quixotic Bruce, an English teacher, funeral director, and restorerer of the family's historic home. He joyfully plays with his children one minute, rages at them or his wife the next. He genuinely expresses the quality of a very vain man at odds with himself and the world, who lashes out in frustration and fury at those around him.

Michele Marie Roberts plays the very frustrated and unhappy wife Helen, who has known of his affairs and endured Bruce for many years. Steve Copps plays several roles as the objects of Bruce’s desires, and has a great time in gold lamé in the glitter song, “Raincoat of Love.” Alison’s two brothers are played by 13-year-old Joseph Bielecki and 2nd-grader Jasper Brown, in his first professional performance. They are good actors and a delight to watch. With sister Jane Hereth, their song “Come to the Fun Home” that takes place in the casket room of their father's funeral home is one of the highlights of the show. It is an homage to the spontaneous creativity of children. Could an adult have fun playing with a jar of formaldehyde?

The music in Fun Home is a brilliant mix of sometimes lush, sometimes quiet melodies, jazz, rock and blues sounds. Musicians are visible behind the partially open walls of the set/house. Musical Director and pianist Theresa Quinn’s graceful arm movements add to the flow of the play as she conducts.

Director Susan Drozd uses the entrances and aisles as well as the stage to create an immediacy with the audience. Chris Cavanagh’s set gives the feel of a high-ceilinged historic home with papered walls and chandeliers. Furniture is moved adeptly and often in darkness as actors are highlighted on one part of the stage and scenes changes are made on another. One scene slides into the next with no sense of waiting or halt in the action. Musical numbers also flow naturally into or from dialogue. There is a smoothness and elegance to every aspect of this musical. And it is a great story.

Fun Home is a brilliant piece of theater with music by Jeanine Tesori, and book and lyrics by Lisa Kron. MusicalFare has done it proud in every aspect. Kudos to all.

You can see Fun Home at Shea’s 710 Theatre through May 19th.