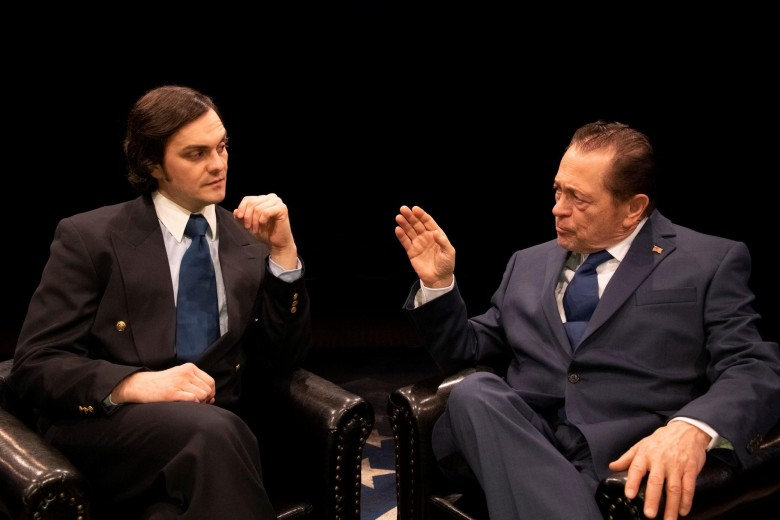 In 1977, David Frost and Richard Nixon contracted to do a series of televised interviews covering domestic and foreign policy, Nixon’s personal life, and of course, Watergate. Frost was a hedonistic talk show host thirsting for re-entry into the lucrative American TV market, while the straight-laced Nixon was seeking a way back into relevance on the American political scene after his 1974 resignation from the presidency. Brokered by talent agent Swifty Lazar, Frost paid Nixon $600,000 plus profit participation for the interviews, an un-heard of concession and an ethical landmine. The playboy and the former president faced off during four 90-minute interviews.

Frost/Nixon, written by Peter Morgan (creator of The Crown on Netflix), explores the negotiations leading up to the interviews and the interviews themselves. Directed by Brian Cavanagh, who also designed the set and lighting, ICTC's Frost/Nixon is a political tour de force, two hours of often witty, fascinating dialogue by an excellent cast that breaks the fourth wall to draw the audience into the tense negotiations and unfolding drama. The playwright uses this forum to explore the ethics of “checkbook journalism” and the power of television to control political and cultural narrative, as well as providing a highly entertaining evening of theater.

Set on a slightly raised platform painted with stars and stripes, the square “ring” is the centerpiece in and around which journalists, political operatives, and the two opponents plan, argue, confront, and face-off against one another.

Jack Hunter plays Richard Nixon and he is superb. His voice, intonation, and gestures all mirror Nixon, but most importantly, his performance captures the essence of the disgraced president, his cunning, his sense of inferiority and envy of those to-the-manor-born, his greed, his belief in his accomplishments, and his almost naïve curiosity about style, light-hearted fun, and sex just for pleasure. He is a brooding presence, a dour man who lacks a sense of jocularity, but shows flashes of humor. Mr. Hunter reveals all of this, showing us Nixon as a flesh and blood man, complex yet simple, self-hating and self-aggrandizing, guileful and ultimately, defeated.

Adriano Gatto also excels as Frost. He plays him with breezy charm, as a glad-hander who loves the limelight, the parties, and the women that fame afford him. At his entrance, he immediately walks to the audience shaking hands and welcoming everyone, making it clear from the beginning that he is a likeable, happy guy. Underneath that lightness, Mr. Gatto gives a picture of a man who knows what he wants and has the determination and ability under all that charm to go after it. His outward lassaiz-faire attitude belies the strength of purpose within and his killer instinct in the final interview.

Adam Yellen is excellent as the political journalist and Nixon-hater, Jim Reston. He does most of the narration and expresses great glee at the thought of nailing Nixon, and passionate frustration and anger about the profit participation and early interviews. An expert on Watergate, he is joined by Matt Witten as Bob Zelnick, the ABC News producer, both hired to research everything Watergate. Peter Palmisano is Marine-rigid as retired Col. Jack Brennan, Nixon’s post-presidency chief of staff and a stalwart defender of the president. David Lundy is Frost’s producer, John Birt, who does his best to rein in the more excessive proclivities of his star. Ray Boucher has a comic turn as the “hygiene obsessive” Swifty Lazar. Jamie O’Neill and Renee Landrigan as Frost’s girlfriend Caroline Cushing, as well as two very different make-up girls, round out the stellar cast.

At the beginning of the play Reston tells us that the Greek tragedian Aeschylus believed that the gods begrudge humans’ success and delight in causing their downfall. American politics is fraught with just such tragedies, people like Alexander Hamilton who ultimately cannot outrun their personal demons, and crash to the ground like Icarus. Richard Nixon is a prime example of this phenomenon, and Frost/Nixon at ICTC delivers a shadenfreude peek into his undoing.