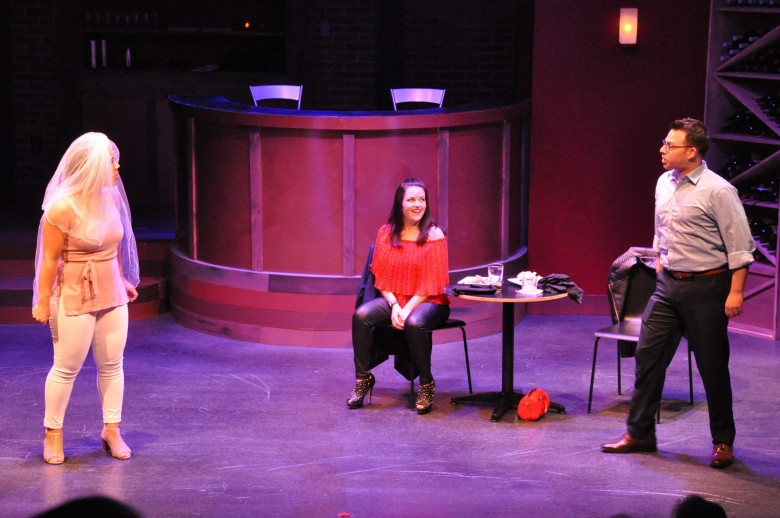 A sweet comedic summer musical, First Date is a delightful, occasionally insightful, confection that highlights the perils and pitfalls, but also the potential of that most unnerving of first dates, the blind date, which can and often does instill terror into the hearts of even the most courageous among us.

Director and Choreographer Doug Weyand has assembled an excellent cast of five, and uses freeze-frames and spotlights to allow the couple to express their fears—and hopes—often through the use of the three other cast members who play out the couple’s thoughts and fantasies, or explain the current pitfall as the night progresses.

Aaron (Marc Sacco) and Casey (Michele Marie Roberts) are the unlikely pair who meet in a bar—he a button-down Jewish man who is a Wall Street maven, she more of an artsy type who reads Eckhart Tolle, works in a gallery and sports tight black vinyl pants and four-inch spike heels. Over the course of 90 minutes, they suffer through the indignities of the blind date and of getting to know one another with the hope that perhaps, just maybe, something more can come of this. They both play their parts well. He is the quintessential insecure nerd on his first blind date, all nerves and obviously feeling out of his element. She acts the weary veteran going through the motions one more time with little expectation of success. Each brings a little more depth to their role as the evening unfolds and they learn more about each other—and themselves.

Witty ditties such as “First Impressions,” “The Awkward Pause” and “The Check” highlight the hazards of the blind date, while “Something That Will Last” speaks to the hopes and dreams that lie beneath all the fears it generates.

Music Director Theresa Quinn heads a quartet of fine musicians, while set, light and sound are designed by Chris Cavanagh, costumes by Kari Drozd, and hair, wig, and makeup are by Susan Drozd.

First Date is not a deep dive into the characters of the couple nor is one sitting on the edge of one’s seat waiting to see how it will all turn out. That is more or less a given. It is a charming, humorous, and occasionally laugh-out-loud surf through the hazards of the blind date as well as a paean to the human spirit that willingly places itself in a minefield in hopes of finding gold.

You can see it at MusicalFare Theatre through August 11th.