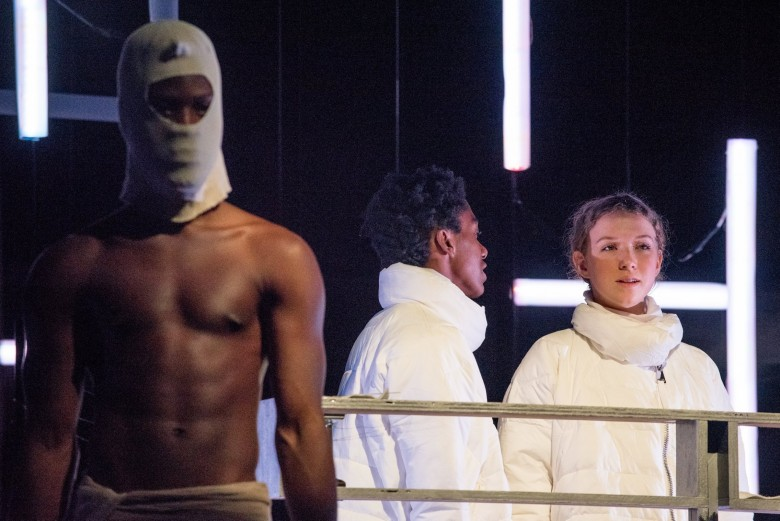 Ah, dystopian fantasies. What would we do without you in these troubling times? In your capable hands you hold our angst and anxiety about the horrors of the present, and the even more hideous possibilities of the future that lurk in our psyches, while we go about earning our daily bread. You are a comfort and a solace, occasionally supply a giggle, and we are ever grateful to you. Well, some are. Others, maybe not so much, as I heard mixed reactions to the play on the way out of the theater.

Far Away, Caryl Churchill’s 65-minute take on one possible dystopian future is now at Torn Space Theater in a stripped-down version directed by Dan Shanahan, with Scenography by Kristina Siegel. In the notes, Mr. Shanahan states that Ms. Churchill “provides almost no stage directions and very brief descriptions of setting and character.” This, then, allows for almost unlimited choices for the production staff and actors. The choices for this show are replete with fog, strobe lights, pounding deep bass atonal music, some very loud noises, and robotic movements by the cast and ensemble. There is the ubiquitous torture scene that is, thankfully, more hinted at than graphic. And there is a bag-head modern ballet and fashion show that is unique and one of the highlights of the evening.

The play is in three acts--the house, the factory, and the war. They take place several years apart and the sets are part of the action. The wobbly “abstract, translucent house” in the first act keeps us off balance as we watch the young girl and her aunt attempt to maintain their stability while talking about a disturbing scene the child witnessed in the night. The second act upstage hat factory, built on a platform, has a life-size hangman-game-like gadget that crosses the stage and deposits the bag-head workers at a staircase that brings them each to the floor for their performances in the ballet and fashion show.

The cast of four--Allison Barsi as Young Joan, Bonnie Jean Taylor as Harper, Corinne McLoughlin as Joan, and Kalub Thompson as Todd, all do their jobs well, with carefully choreographed movements and speech patterns throughout most of the play. Even through the high stylization, they often communicate real feeling, some repressed, some very expressive. The eight-person ensemble adeptly handles the choreographed scene changes and the ballet and fashion show.

The third act takes place during a soldier’s one-night leave from a war that encompasses the entire earth–volcanos, rivers, people, organizations, animals... All are fighting each other, and sides are changed constantly. In addition to the charged atmosphere between Todd and Harper, there are some comic moments as they argue about whether crocodiles can be trusted, how to handle killer butterflies and deer, dangerous international dentistry, and elephants that have gone over to the Dutch. This is great satire that speaks to the absurdity of war, any war, any time, and one of the more engaging parts of the play.

The difficulty with portraying evil on stage is that evil, in the end, is banal. For all of its permutations, it is in the end a one-trick pony. So, to make a dystopian play engaging enough for audiences to want to see it, there must be something else in the mix. In Far Away, as done by Torn Space Theater, it is the abstract, absurdist production values that give it life, along with the cleverness of the script in Act One and Act Three. And, of course, those dancing bag-heads.

Performances are Thursday-Sunday, from Thursday, February 17 through Sunday, March 11 at 7:30pm at the Torn Space Theater in the Adam Mickiewicz Library & Dramatic Circle (612 Fillmore Ave). Tickets: $25

612 Fillmore Ave Buffalo, NY 14212
Torn Space Theater returns to the great dramatic canon with a new interpretation of 'Far Away' by renowned British playwright, Caryl Churchill. In the play a young girl witnesses a disturbing act, grows…
- Share this page -