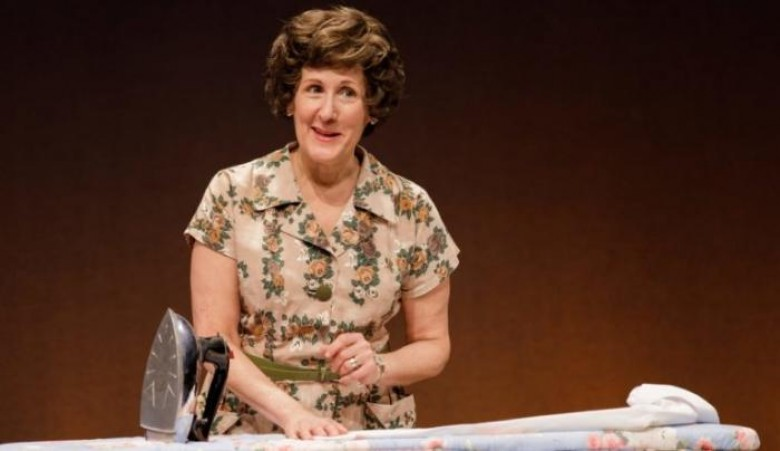 A toaster cover and June Cleaver pearls, a rotary dial phone and portable typewriter are emblems of the 1950s in the short (60 minute), one-woman play about humorist Erma Bombeck now at Shea’s 710 Theatre.

Ms. Bombeck was a journalist who gave it all up to raise her family, and then took it all back when she began writing a column for the local paper about the perils of being a stay at home mom in the '50s and '60s. At one time her column appeared in 900 newspapers. She worked tirelessly for ratification of the Equal Rights Amendment, she was on ABC's Good Morning America from 1975 to 1986, and she wrote articles for magazines and a dozen books, with titles like I Lost Everything in the Post-Natal Depression, and Motherhood: The Second Oldest Profession. She was a very funny and very successful woman who accomplished a great deal in her lifetime.

Written by journalist sisters Allison Engel and Margaret Engel for the Women’s Voices Theater Festival, Erma Bombeck: At Wit’s End chronicles the life and times of Ms. Bombeck. The script, while very funny at times, also feels as though there could be more to it; it does not quite do her justice. The hour is packed with her history and some of her famous lines in a kind of Cliff Notes survey course that provides an outline of a life but lacks its depth.

Pam Sherman, syndicated columnist and recovering lawyer, plays Bombeck as the '50s housewife wearing a shapeless house dress, sporting a grey wig and the afore mentioned June Cleaver pearls. Ms. Sherman’s performance is technically perfect as she irons, zips over to answer the phone, talks to several children at once, or has it out with an invisible and silent insurance salesman. She gracefully moves from living room to kitchen to bedroom, talking, often at warp speed, much of the time. She has some fine moments, as when she has an epiphany after attending a talk by the previously unknown to her writer of The Feminine Mystique, Betty Friedan. Shocked when Ms. Friedan refers to women who write facetiously about the plight of housewives as Uncle Toms, she shows her mettle as she embraces the feminist movement. However, she often seems rather detached, skimming the surface rather than living the part.

Mark Cuddy, Artistic Director of the Geva Theatre Center in Rochester, is the Director. The production values are excellent. Scenic Designer Sam Holderlein’s minimalist set works very well. Rooms are delineated by function – a sink cabinet for the kitchen, chair and table for the living room, and a bed for the bedroom. Lighting Designer Derek Madonia softens and dims the lights to enhance mood.

Erma Bombeck: At Wit’s End is a mixed bag. There are some great one-liners. “I never met a woman who would give up lunch for sex” is a favorite. The nostalgia factor is there for the older crowd and it works as an amusing, if not paticularly insightful, hour-long review.

Erma Bombeck: At Wit’s End is at Shea’s 710 Theatre through November 10th.

710 Main Street Buffalo, NY 14202
Erma Bombeck, one of our country’s most beloved humorists, captured the frustrations of her generation by asking, “If life is a bowl of cherries, what am I doing in the pits?” Starring…
- Share this page -