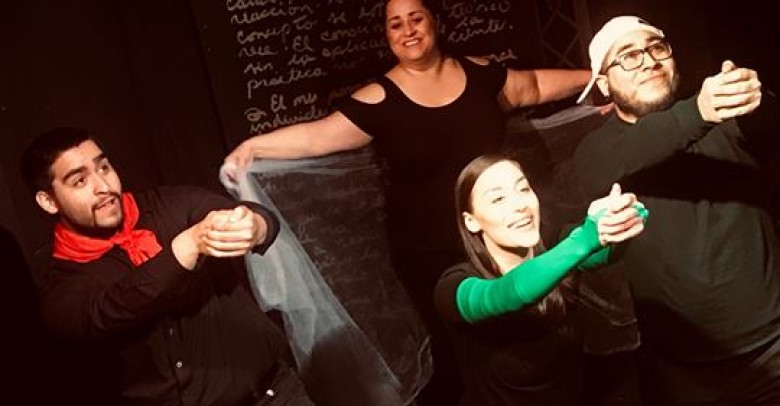 Raíces Theatre Company has chosen musicals for its fourth installment of Desde el Puente, their annual 10-minute play festival. All are written, directed, and acted by members of the ensemble, and all are “culturally specific to the Latino experience,” as Artistic Director Victoria Pérez notes in the program.

Their ambitious undertaking has resulted in a very engaging and entertaining 100 minutes of comedy, drama, tragedy, satire, and a bit of Puerto Rico’s history. Written by eight people, music and lyrics composed by seven, and directed by four, there is a great deal of laughter and some tears, salty language and bawdy moves, rousing songs and plaintive ones, and a few moments of reflection about our capacity for cruelty. The musicals begin with laughter in El Closet and end with Puerto Rican pride in their history in Don Pedro y Yo.

The plays are in Spanish and English, and while I usually attend with a friend who speaks fluent Spanish, that was not the case this time. Ms. Keyla Gómez kindly translated some of the finer points for me. However, it is not necessary to speak Spanish for English-only audience members to understand and thoroughly enjoy the musicals. And vice versa. The writers do a fine job of interspersing the languages, and the actors portray the emotions of their characters so well that the story line of each musical is clear.

Steve Brachmann, Lissette DeJesus, Alejandro Gabriel Gómez, Rolando E. Gómez, Alexia Guzmán, Smirna Mercedes, Maria Pérez-Gómez, and Victoria Pérez are the eight ensemble players who sing and act their way through, at my count, 38 different roles. They have fine-tuned their various parts so that each character feels very real and different from the others portrayed.

Llegó La Hora, written by Maria Pérez-Gómez and Victoria Pérez, is a hilarious satire on dating shows that closed the first act and opened the second. Victoria Pérez is the ever-so-cheerful host who introduces three men vying for the hand of the bachelorette. Rolando E. Gómez kills it as a flamenco dancer with his cascading hair and bizarre hand movements, while Alejandro Gómez has the hip-hop vibe down cold in very comical movement and speech. Steve Brachmann just has his, well, you’ll see. Into this insanity arrives the bachelorette in the person of Smirna Mercedes, who belts out a song in her terrific, powerful voice, all to the chagrin of Ms. Pérez. What show does she think she’s on? Ms. Mercedes has a different agenda entirely. Very, very funny.

Es mi Voz, book by Lissette DeJesus, speaks to the early 1970s prejudice against lesbians and gays in which a shy woman allows her secret lover to sing her songs until she finally finds her voice.

Padrinos de Boda, book by Anthony Alcocer, is a sweet exposition on the practice of an older couple acting as mentors for newlyweds. They are wedding godparents, who the couple can seek out when they have difficulties, as “no Latin couple would pay for marriage counseling.”

Plena Cautiva, book, music and lyrics by Dewel Pérez, finds five prisoners playing tambourines and singing. The music is joyous and charged with energy, while the circumstances of the musicians are in contrast as they argue and talk about being isolated and bored and feeling their music is the only thing they have left.

The powerful Sin Palabras, book by Victoria Pérez, begins with a man and a woman (Alejandro Gómez and Victoria Pérez) screaming at each other with such venom it is heartrending, and can only mean love turned to hate. Why? What has happened to cause Angie and Eddie to so despise and fear each other? It is a very moving 10 minutes of theater and very well acted by the pair.

In addition are the opener El Closet, book by Maria Pérez-Gómez, in which a mother calms her daughter with a tale of a magic closet inhabited by a frog, a little pig, and a crowing rooster played by Alejandro Gómez, who has the audience laughing out loud. Just in Time, book by Alejandro Gómez, is about the importance of friendship for two young men. Good Night Puto, book by Alexia Guzmán, has two friends coming to the rescue, with wine and wisdom, to a third who has been torturing herself watching telenovelas and is in the throes of obsession about a worthless man. It is funny and packs an important message.

The closer includes the entire company in Don Pedro y Yo, book by Rolando M. Gómez, Maria Pérez-Gómez, and Victoria Pérez. Pedro Albizu Campos was a leading figure in the Puerto Rican independence movement. This play is a rousing patriotic piece that centers around his activities and imprisonment by the government, and the pride people take in their heritage.

The trio of musicians, Musical Director Kevin Doyle on keyboard, Rafael J. Pérez on guitar and percussion, and Sara Rodriguez on guitar, flute and percussion are expert, and could be a performance in themselves. They never overwhelm the singers in this small space and are an integral part of the feel of the entire evening.

I admit to seldom remembering lyrics to songs I have only heard once. However, in the moment, I found them to be very much in keeping with the feelings and energy of each play, and they added to the overall understanding of the piece. Or were just fun.

The stage is enclosed by two black flats on each side, one depicting a bridge and the other filled with writing in Spanish. Simple set changes between plays are quick and costumes are minimal. It is all about the plays themselves.

Desde el Puente, Musical Edition is a very enjoyable, often absorbing evening of musical theater, and highlights the expert and diverse talents of the members of Raíces Theatre Company.

You can see it at the Manny Fried Playhouse through May 5th.