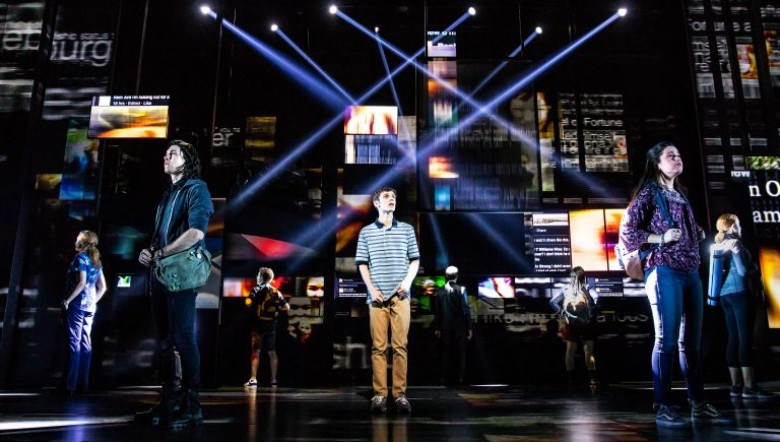 Oh, what a tangled web we weave... The most painful deception is self-deception, the lie buried at the bottom of the heap of all the lies piled on top to keep it from surfacing.

Self-deception lies at the heart of the compelling, dynamic, very contemporary, yet timeless, musical, Dear Evan Hansen. Achingly funny, heartbreaking, and ultimately life-affirming, it is a painfully realistic look at the overwhelming role of social media in the lives of contemporary youth and all that can go horribly wrong,

Written by Steven Levenson with hauntingly beautiful music and lyrics by Benj Pasek and Justin Paul, Dear Evan Hansen won six 2017 Tony awards, including Best Musical. Directed by Michael Greif with amazing computer-generated lighting design by Japhy Weideman, it is a cautionary tale about the consequences of loneliness and social isolation, of being an outsider and feeling invisible in a youth culture dominated by social media. It is a brilliant coming-of-age tale about an anxious high school senior who lies his way into the heart of a wealthy, grieving, disconnected family, acts as the catalyst for his and its redemption, and along the way becomes a reluctant social media star. It speaks to painful family issues, from the perspectives of an overwhelmed single mom and of a wealthy, nuclear family. Neither understands the depth of their sons' despair and both feel equally powerless to help them. The first song, “Anybody Have a Map?” by the two moms beautifully articulates that sense of moving blindly through a maze.

Evan is a very nervous, fast-talking young man whose overworked, underpaid mother is his sole guardian, his father having departed for points west when he was seven. He has a cast on the arm he broke falling out of a tree in the summer. He worries and worries, and then worries some more as the first day of school arrives. He lusts after the vivacious and popular Zoe Murphy. He takes pills and sees a therapist who has recommended that he write a letter to himself every morning explaining why this will be a good day. The letter begins "Dear Evan Hansen…" On the first day of school, he instead writes why this definitely will not be a good day. Another outsider and very troubled youth, Zoe’s brother Connor, agrees to sign his cast at school, then finds the letter in a printer in the computer lab. Thinking it was written to him, as it mentions Evan’s longing for Zoe, he angrily shoves Evan to the ground, taking the letter with him. Connor later commits suicide and the letter is found by his parents. They ask Evan to come to their home, and so begins his foray into the world of deception, fueled by his desire to do good and his longing to be seen and accepted in the hormone-driven, desperation-charged horror show that is high school which, as Evan’s mom Heidi explains, "only cheerleaders and football players really like."

Ben Levi Ross is outstanding as Evan. His lanky frame, herky-jerky movements, and rapid speech patterns are perfect for this lonely adolescent on the very cusp of manhood. His marvelously strong voice soars with longing and whispers with desperation and hope. He is comical and adorable, so scared and sweet and desperate that you fall in love with him immediately and root for him unequivocally, like one of those overamped teenaged cheerleaders.

The supporting cast of seven all have significant roles that they play very well. Jessica Phillips, as Heidi Hansen, is a standout as she conveys her unconditional maternal love embracing her heartsick son in “So Big/So Small.”

Social media plays as critical a role in this musical as do the people on stage. Mr. Weideman’s images of Facebook, Twitter, and Instagram flash and wash over the stage, in profusion at times, overwhelming and dominating the people who are in thrall to the power created by instant internet celebrity that arrives swiftly and then vanishes just as rapidly in viral waves. Lives are laid bare for all to see and privacy is a distant memory in this swirling mass of audio-visual information, memes, and hashtags.

However, it is the people who ultimately matter. They find their way through the muck and mire of pain, loss, and longing, and learn to connect with and see one another in this very human, very real, very entertaining, very well written and performed musical that is fascinating to watch and a delight to experience.

You can see Dear Evan Hansen at Shea’s through Sunday, May 19th.