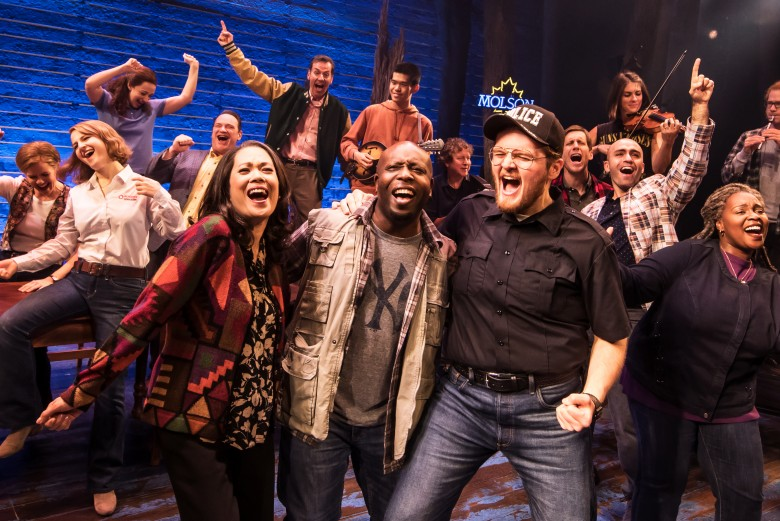 Come From Away is a heartwarming musical about people coming together in a small town in Newfoundland after the 9/11 tragedy. What might have devolved into a syrupy sentimental mishmash instead uses wit and honest feeling to tell its true story. About 100 minutes of effervescent dialogue, music, song and dance in which some characters are clearly delineated while others are composites, Come From Away recreates an insular world and community that lasted just five days but changed lives forever.

Thirty-eight commercial jets were forced to land on a large airstrip near Gander, Newfoundland, after two planes crashed into the Twin Towers in New York City. The small town of just 7,000 people found itself hosting almost as many passengers as members of the communty. Stranded for five days, the travelers were taken care of by the townspeople who opened their hearts as well as their homes and community to them.

Book, music and lyrics are by the Canadian couple Irene Sankoff and David Hein. In 2011, they interviewed attendees at the tenth reunion of the plane people and the townspeople in Gander, using what they learned as the basis for the musical. Direction is by Christopher Ashley, who won the Tony in 2017 for the Broadway production.

The entire ensemble of 12 actors, all onstage most of the time, is spot on in their many roles. The dialogue is fast-paced, chairs are moved around with precision, they all sing, dance, and are in almost constant motion, changing from character to character and place to place effortlessly. Well, it looks effortless, which means they are worked really really hard for a long time to create this effect.

Most of the numbers are sung by the outstanding ensemble, with just a few solos. “Me and the Sky,” a melodic solo by Marika Aubrey as Captain Beverley Bass, tells her story, from her childhood to becoming the first woman to captain a commercial plane in the United States. Danielle K. Thomas as Hannah, a woman whose firefighter son died at the Twin Towers, sings the lamentation, “I Am Here” with mournful sadness.

Each song highlights an aspect of either the physical or the emotional experience for the people in this most unusual situation. “Blankets and Bedding” has the townspeople running around gathering those items and many more. “Darkness and Trees” addresses the fears of people finally deplaning after 14, 20, or 28 hours and being taken on buses to an unknown destination, not knowing what has happened to cause them to be brought to this faraway place or what will happen to them there. “Screech In” is upbeat and very amusing: in order to become a Newfoundlander, volunteers must down a glass of screech, the local rum drink, and then kiss a freshly caught cod. “Something’s Missing” speaks to the changes in everyone following the five day experience. “We all looked the same but we’re different than we were.”

The music, played by eight superb musicians, is rooted in Celtic folk and soft rock along with some foot-stomping rhythms. They play the fiddle, the flute, the bodhran, the Irish pipes called uilleann, guitars, a mandolin, an accordion, and more under the expert direction of Musical Director Cameron Moncur. Their performance as they take center stage after the curtain call is a kick-ass, bring-the-house-down, fitting finale.

The set by Beowulf Boritt has a woodsy look, with tall tree trunks surrounding the stage, a turntable, mismatched wooden chairs, a few tables, and a planked wood back wall that create a plane, a bar, an outlook, and all the places where the action takes place. The rustic feel and simplicity of the set is in keeping with the setting and with the people who inhabit the town.

Come From Away tells a serious story, but never takes itself too seriously, which is a gift for the audience. Maudlin never plays well, and it would be very easy to slip into it given the subject matter. But this musical is about the aftermath, not the tragedy itself, when people let their best selves shine, took care of each other, and changed their lives. It is a compelling evening of theater.

Come From Away is at Shea’s Buffalo Theatre through October 20th.

646 Main Street Buffalo , NY 14202
THE TRUE STORY OF THE SMALL TOWN THAT WELCOMED THE WORLD. Broadway’s COME FROM AWAY is a Best Musical winner all across North America! This New York Times Critics’ Pick takes you into…
- Share this page -