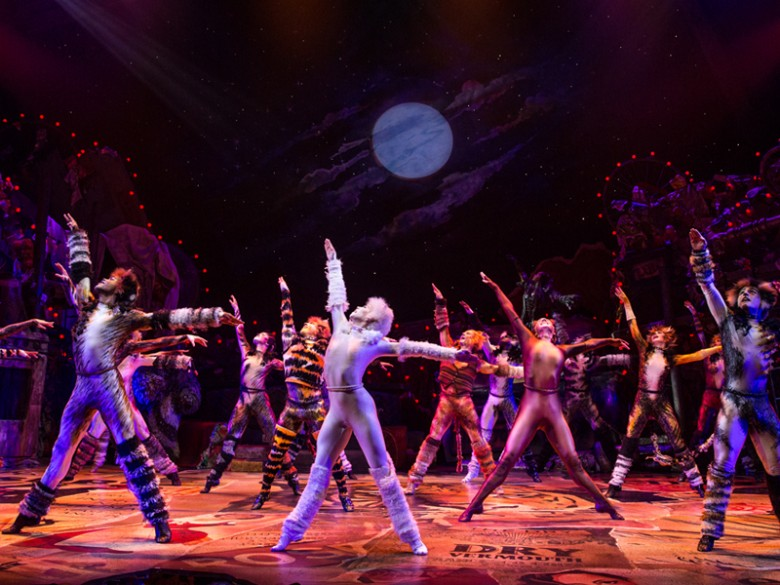 Cats, now at Shea’s, is a visually and aurally striking phantasm, an inventive confection that includes stunning balletic and acrobatic choreography performed with feline grace by first-rate terpsichoreans, imaginative lighting, a junkyard set that looks like a hoarder’s dream, and oddly compelling, colorful cat costumes. With T. S. Elliot and Andrew Lloyd Webber in charge of the words and music, the sounds emanating from the stage—and at times the aisles when the cats slither into the audience—are, well, music to one’s ears. Mr. Lloyd Webber’s musical prowess is much on display, from jazzy rock tunes to the famous, much recorded, lyrical and heartrending “Memory.”

The very thin thread of a plot seldom interferes with business on stage. In a sentence: At the beginning of Act I, the tribe of Jellicle cats are throwing their annual Jellicle Ball wherein the patriarch cat, Old Deuteronomy, picks a cat to ascend to the “Heaviside Layer,” wherein that kitty will be reborn into a new life, which happens toward the end of Act II. There you have it. That almost superfluous bit of rationale being out of the way, focus can now turn to the more sensual stage and aisle happenings.

As characters are introduced or introduce themselves, they sing their personal tunes and dance their personal dances, each unique and full of energy, performing Andy Blankenbuehler’s choreography, except for Old Deuteronomy, Asparagus, and poor Grizabella, the faded and hated “Glamour Cat.” They move more slowly, as befits their advanced ages.

Alpha cat Munkustrap explains who the Jellicles are, asking “When you fall on your head, do you land on your feet?” Jennyanydots does a killer tap dance in a flapperesque catsuit surrounded by mice and cockroaches. Gotta love the tap dancing. The narcissistic Rum Tum Tugger struts his stuff in shiny black spandex and “will do as he do do, and there’s no doing anything about it.” There is a fat cat, mischievous thieving cats, a railway cat, a theater cat and the criminal Macavity in an '80s hair band catsuit, who can disappear in an instant so that “when a crime’s discovered, Macavity’s not there.”

The most exciting cat is Magical Mister Mistoffelees, “the original conjuring cat” in a showstopping showcase of brilliant dance technique by Tion Gaston wearing a color-changing jeweled jacket. Lights strewn from the top of the proscenium to the balcony change color in synch with his jacket as he flies across the stage, restoring the lights the evil Macavity short-circuited before disappearing.

The lighting designed by Natasha Katz creates momentary images and moods that disappear in a flash, literally, to be replaced by an entirely different effect that creates yet another image and mood. They change hues and shift focus in a blink.

The almost 40-year-old Cats is a musical feast for the senses. Whether you love it or not—and while I did not love it, I did find it fascinatingly weird and brilliantly produced—there is nothing else quite like it. A suggestion for attendees: let your minds rest for the evening, let them take a nap rather than toil in search of meaning or a through line, and allow your senses full rein as you drink in the spectacle that is Cats.