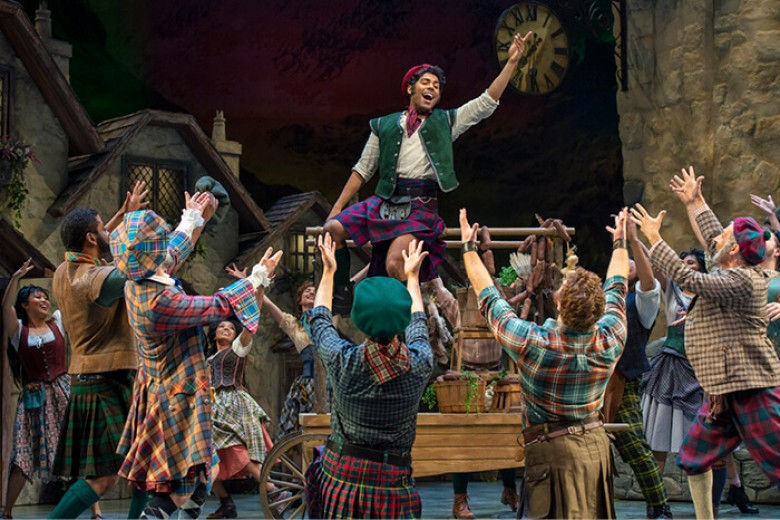 The heather is on the hill and the mist is in the gloamin’ at the Shaw Festival. Brigadoon’s one day per century has arrived in an updated version that is delightful, sweet, and heartfelt, with an understanding of suffering. It is bursting with wonderful music, songs, and dances.

The book of the 1948 Lerner and Loewe musical was revised in 2014 by Brian Hill to reflect a more contemporary concern, i.e., wars and their aftermath, rather than the torture and burning of women deemed to be witches. The songs remain intact with their memorable melodies and yearning refrains.

The story begins in 1946 with two American veterans of WWII, Tommy and Jeff, hunting in the woods in the Scottish Highlands. They get lost and wander into Brigadoon, a village that miraculously rises out of the mist once every hundred years and only for one day. It is a magical place, untouched by the modern world. Tommy, engaged to be married to a woman he does not love in America, falls for the beautiful Fiona in the village. He must decide by the end of the day whether to stay or return to the life he, or rather his fiancé, has planned. The uncomplicated lives of the inhabitants of the village are counterpoint to Tommy’s nightmare war dreams, and Jeff’s sardonic, but very witty approach to life and love.

Directed by Glynis Leyshon, Brigadoon shimmers and shines from the misty forest in the first scene, with its wonderful and surprising projection of a stag, to the denouement in the village at the end. Scene changes are smooth and organic, with no blackouts or clunky set changes when the action moves from the village, with its charming houses and mountains in the background (set design by Pam Johnson), to the forest, or to a library with books suspended in the air. The screen projections by Corwin Ferguson are stellar. For instance, the forest with its misty floor looks like you could walk right through it and feel the plants and earth beneath your feet. The eclectic choreography is splendidly staged by Linda Garneau, ranging from ballet to Scottish reels. However, all of that would be for naught if the cast faltered in their roles. The good news is the large cast is excellent and more than up to their tasks.

Matt Nethersole is outstanding as Charlie, the fiancé of Fiona’s sister, Jean (played with maiden excitement by Madelyn Kriese). To be wed that very day, he expresses great joy and wonderful heart and depth in his songs, first the lively “I’ll Go Home with Bonnie Jean,” and then the gorgeous “Come to Me, Bend to Me.” His dancing is electrifying in both numbers, high-spirited and full of fire in the first, and sensual and romantic in the second, in which he and Jean perform a stunning pas de deux.

Alexis Gordon is a lovely Fiona. Her voice is strong and beautiful, and she is a very good actor, finding the humor in her duet with Tommy, “Almost Like Being in Love,” and the sadness and wisdom in “From This Day On.” Her counterpart, George Krissa as Tommy, is less effusive, as befits a man forever changed by war. Kristi Frank is very fun and funny and has two witty songs as Meg, who knows all the single men in town. She pursues Jeff with single-minded purpose. Played by Mike Nadajewski, he has the best friend role securely in his pocket and has great timing with his comically droll commentary. And mention must be made of Genny Sermonia, whose dance as Maggie, is a brilliant expression of unbridled grief.

Brigadoon is a beautiful story of love and miracles, but also acknowledges the pain and suffering in the world. This production is stellar, containing all of the elements of a great musical—direction, costuming, choreography, technical aspects, casting. The music, songs, and dances are superb. There is everything to enjoy about this Brigadoon. Kudos to the Shaw Festival.

You can see Brigadoon at the Festival Theatre in Niagara-on-the-Lake, Ontario through October 13th.

10 Queen’s Parade Niagara-on-the-Lake, ON L0S 1J0
What would you give up for love? Stumbling upon a magical village that appears out of the Scottish mist for one day every century, Tommy, a modern boy, meets Fiona, a girl from the past. Should he stay…
- Share this page -