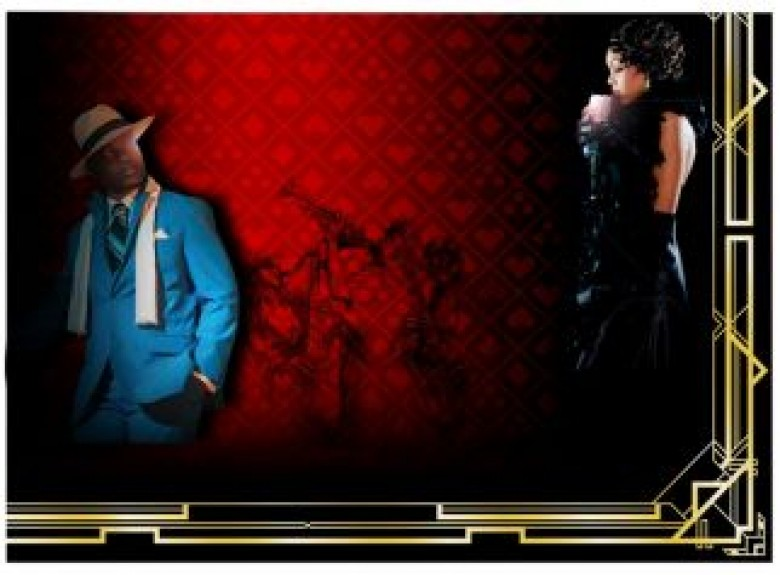 Blackberry Daze, now at the Paul Robeson Theatre, blends sweet young love, seduction, rape and domestic violence in a stew spiced with jazz, blues and gospel music. Set just after World War I in rural Virginia and Washington, D.C., the musical is based on the 2012 novel, Blackberry Days of Summer by Ruth P. Watson, in which an explosive alcoholic gambler, Herman Camm, disrupts the lives of three women–a blues singer, a country wife, and her teenaged daughter. The book for the musical is written by Ms. Watson and Thomas W. Jones II, with original music by William Knowles.

The events leading up to the murder of Herman Camm, which takes place onstage at the beginning of the musical, unfold in a combination of narrative by the characters, action on stage, and projections on a large screen that depict various settings for the story–a woods, a church, a kitchen, a juke joint, etc. Scenic design by Harlan Penn is effective in creating the many changes required on a stage that is set with a raised platform and wooden benches that serve as a bed and a horse-drawn carriage, among other things.

Herman Camm (Fisher) seduces the church-going Mae Lou (Latosha Payton) even before her husband dies, while at the same time having an affair in D.C. with Pearl (Tifani Wofford), whose husband, Willie (Augustus Donaldson – who also plays the young baseball player, Simon) is back from the war. Mae Lou’s daughter, Carrie (Danielle Green) is also in Herman’s predatory sights. Sandra Gilliam as Ginny and Annie Mae, and Ayana Naomi as Carrie’s friend Hester round out the cast.

The strongest, most fleshed-out character is the daughter, Carrie, played by a stellar Danielle Green. She looks and acts like a teenager in love and possesses the depth of feeling that Carrie needs as her life takes a turn that almost destroys her. She has a beautiful voice. Her song, Palm of God, is heart-rending, not just in the lyrics, but in her desolation as she sings it.

Fisher’s Hermann could show us more of why the women are so attracted to him. He does a fine job as the rageful alcoholic, but other than being a natty dresser, he does not let us see what has charmed Mae Lou and Pearl into upending their lives. Tifani Wofford as Pearl certainly has the looks and moves of a gorgeous country girl who escapes to the big city. However, her voice does not quite have the quality or strength of a blues singer, and she often seemed to be reaching for notes. Latosha Payton has a very strong voice that she uses to great advantage, particularly in the gospel numbers. Augustus Donaldson is best as Simon, who is in love with Carrie and is off to play baseball in the Negro Leagues. His sweetness is very charming. Ayana Naomi brings liveliness and spirit to her role as Hester. Sandra Gilliam as Ginny had some problems with her mic, but her performance is fine as the wise aunt.

Some of the characters are stereotypical, whether by design or lack of character development–the country wife, the jazz singer, the angry husband, the narcissistic seducer. Carrie, her friend Hester, Simon, and Ginny feel more like real people with hopes and dreams or some wisdom about life.

Director/Choreographer Thomas W. Jones II creates a certain rhythm in moving his actors around while changing sets. The dance numbers are energetic and fun. I think he could have done more with fleshing out the characters mentioned above. He portrays the rape scene as horrific as rape is without being too graphic. Not an easy accomplishment and one to be commended. The show never lags as the story unfolds.

Musical director Frazier Thomas Smith plays piano throughout the performance and is a highlight of the evening. His one instrument was enough to sustain the entire two hours and create the jazzy, bluesy, and gospel moods that are essential to this show. Kudos, Mr. Smith.

All in all, Blackberry Daze is an entertaining evening with some very strong numbers like Take It Back and Layin’ It, a stellar performance by Danielle Green, and some very fine singing and dancing.

350 Masten Ave. Buffalo, NY 14209
It is the end of “The Great War”, and a small Virginia town is rocked by secrets and seduction as Herman Camm, a provocative gambler, weaves his magic on the lives of three unsuspecting women,…
- Share this page -