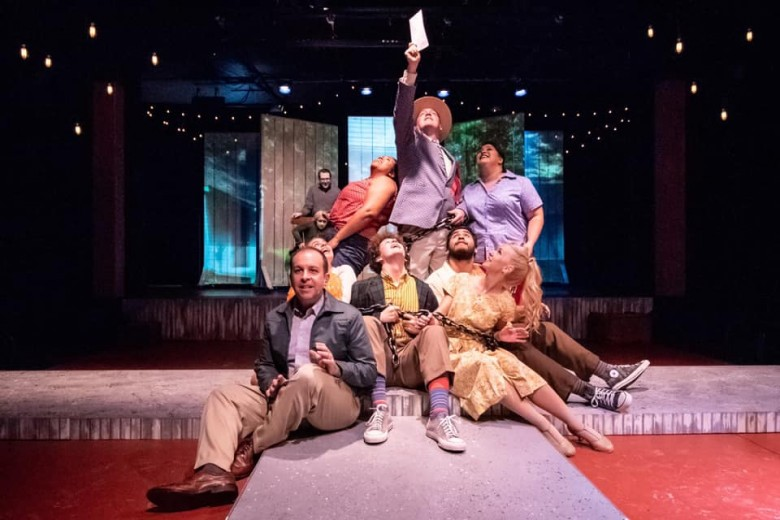 Second Generation Theatre, the six-year-old company founded by three local women, has found a new home at Shea’s Smith Theatre, and with the opening of Big Fish, it looks to be a very productive collaboration. The sold-out opening night audience was ready to be entertained and was not disappointed by this laughter-to-tears production of the musical Big Fish based on the best-selling novel by Daniel Wallace and the motion picture by John August. Mr. August also did the book for the musical, with music and lyrics by Andrew Lippa.

The Big Fish of the story, Edward Bloom, played by Lou Colaiacovo, is a traveling salesman from rural Alabama. The antithesis of Willie Loman, that other fictional salesman-on-the-road-in-search-of-a-bigger-life, Eddie Bloom lives in a magical reality world peopled with the likes of a mermaid, a witch, a giant, and a carnival owner. A confabulator to his bones, loud and obnoxious, demanding center stage when it would be best to stand aside, he is nonetheless simpatico because Mr. Colaiacovo, in a well-honed, finely nuanced performance, imbues him with all facets of his humanity including his dreams denied, his fears and generosity, and his love for his family.

Edward and the Company sing the opening number, the rousing Be the Hero that defines his philosophy of life and presages things to come, in which Edward encourages his son, Will, to be the hero in his own story and experience the magic of life. Will, who was “born a tiny middle-aged man,” with his feet planted firmly on the ground, only wants to know what is real and true, and therein lies the struggle between father and son. Played as a child by Noah Bielecki and by Ricky Needham as a man, Will is caught between his love for Edward and his anger at his father’s absences and tall tales. In the song Stranger, as Will is soon to have a son of his own, Mr. Needham pours out his heart and his hurt, his wishes for his boy, and his disappointment with and desires for his own father. Mr. Needham sings with a plaintive longing that touches the heart.

Michele Marie Roberts’ role as Sandra, Edward’s wife, is written as support and, at times, a scold for Edward. However, Ms. Roberts’ ability to turn her into a flesh-and-blood woman is highlighted in her paean to Edward and their love in I Don’t Need a Roof. And she is a hoot, along with Alex Watts and Bethany Burrows, in Little Lamb from Alabama, the sticky sweet song that hilariously skewers the southern belle persona.

The giant, the witch, and the mermaid are part of the magic, as is the carnival owner Calloway, played by Jacob Albarella, who has the sleazy vitality of the carnie always looking out for the main chance down to a T. Dave Spychalski as the giant, Karl, wears the tallest platform shoes I have ever seen, and even without them looms over the rest of the cast. He is excellent as the hulking, misunderstood savant. Victoria Perez gives it her all in her song with Edward, The Witch, sashaying around, snapping her fan, and holding out her crystal ball while she tells Edward she knows how he will “go out” when he dies. She also plays a mean-looking bearded lady, and a mayor. Bethany Burrows rounds out that foursome as the lovely mermaid.

Bobby Cooke is suitably dense as the dumb jock, Don Price. Preston Williams, with ants in his pants, is his brother Zacky. Stevie Jackson as the high-school sweetheart, Brittany Bassett as Will's wife, and Alejandro Gomez are also part of this first-rate cast.

Music Direction is by Phil Farugia, Lighting, Set, and Sound Design is by Chris Cavanagh, and Video & Projection Design is by Brian Milbrand. Much is left to the imagination on the simple set, which is augmented by the projections of fields of daffodils and Edward hurtling through space, among others, on wooden flats on wheels. The music enhances the singers and the songs rather than overwhelming them, which is sometimes the case in a small space.

Big Fish does not delve into any difficult issues that may or may not exist in Alabama. It creates a fantasy world that lives outside of larger issues. It is a magical realism story of a strained father/son relationship that could easily have devolved into a gluey saccharine muddle but does not thanks to the excellent acting by the main characters, the delightful contributions of the supporting cast, some very funny and some heartfelt musical numbers, and the sparkling choreography by Michael Walline, who also directs his cast on a thrust stage that brings the action right to the audience. I sat stage left in the first row and enjoyed the dancers being so close but was disappointed at times to see only the back of a character while he or she was speaking to another out of my sight line. A minor quibble in an otherwise very enjoyable and well-produced musical. Mayor and Mrs. Brown, sitting front row center, seemed to be enjoying Big Fish, and I think you might, too.