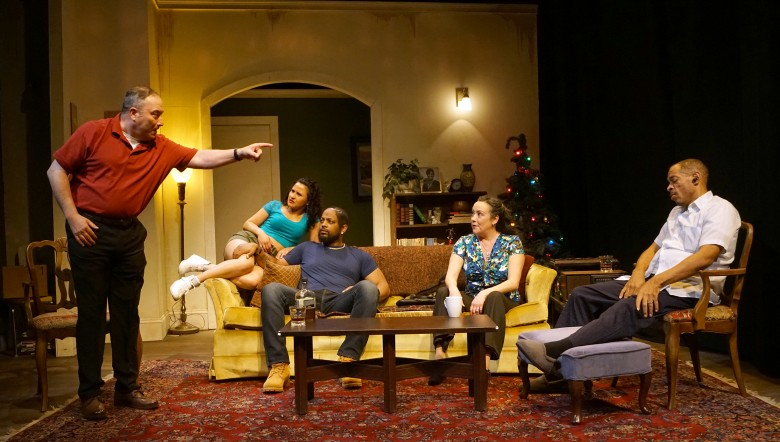 Just when you think you know where Between Riverside and Crazy is heading, playwright Stephen Adly Guirgis veers off in an unexpected direction. The play is chock full of surprises that are emotional, comic, and occasionally shocking. It is delightful and engaging, using serious subjects and mining them to discover the core of humanity beneath, and the paradoxes that define humanity.

Walter “Pops” Washington is a disabled retired black NYC police officer who was shot six times by a white rookie officer in an incident eight years previously. He has lived in a sprawling rent-controlled apartment on posh Riverside Drive for many years. His landlord is trying to evict him so he can raise the rent, while the city is trying to get him to settle a lawsuit about the shooting. His son, Junior, lives with him, as do Lulu, Junior’s girlfriend, and Oswaldo, Junior’s friend. The young men have a history with the police and may or may not be trying to straighten out their lives. Lulu is a student, or not. And then there are the two police officers who visit one evening for dinner and drinks, and a rather mysterious Church Lady.

John Vines as the disabled Walter has a very frail look but is full of piss and vinegar. He expertly handles this juxtaposition as he rails against the city, fate, and life itself. He is a curmudgeon—a stubborn, angry alcoholic who drinks whiskey for breakfast in his recently deceased wife’s delicate porcelain teacups, fuming about Rudy Giuliani (very funny) or the landlord, and then in a turnaround, reveals Walter’s kindness, smarts, and slyness. Walter is a multi-layered character and Mr. Vines embodies him as the complex man that he is. He is excellent in this role.

Dave Mitchell and Lisa Vitrano also excel as the police duo that come to dinner. Mr. Mitchell plays the oily sycophant-with-an-agenda, Lieutenant Caro, to the hilt. He is comically unlikeable as he insists on pouring more drinks and butters up Walter. Later he becomes not-so-comically unlikeable, a role that Mr. Mitchell seems to revel in and plays very well. Ms. Vitrano is Detective O’Connor, Walter’s former partner, and her warm feelings for him are clear. She shows a good heart but is caught between the two men and her own agenda and visibly struggles with which will win out in the end.

Gabriel Robere plays Junior as a man-child who is still tied to his father. Alejandro Gomez is Oswaldo, the friend who is trying to go straight. In the first scene, he parries with Walter over eating a good diet and explains that his social worker says he has “emotionalisms,” all of which sends Walter into a tirade about experts saying one thing is good now and saying the exact opposite later, which happens quite often in this play.

Melinda Capeles is the dim, sexy Lulu. She is a bit over the top, but still very funny as she flips from one emotion to another in a heartbeat, shaking her booty at every opportunity. Last, but certainly not least, is Victoria Perez as Church Lady, in an outrageously funny scene with Walter that includes orphans, communion wafers, lepers, and orgasms, but not in that order. Ms. Perez is completely believable and very funny as the shy Santeria practitioner from Brazil—with an agenda.

Sound design is by Eric Burlingame who fits the music to the action, as in the Samba played in the scene with Church Lady. The set designed by Lou Iannone provides the sense of spaciousness the apartment would have, while the furniture by set decorator Dyan Burlingame reflects the less grand salary of a police officer.

Between Riverside and Crazy is brimming with the clever, complex and very blunt dialogue for which Stephen Adly Guirgis is famous. It speaks to the contradictions, complexities, pain, suffering, and joy of life and does so in a manner that ultimately reveals more than it keeps hidden as it twists and turns its way to its surprising conclusion.

Between Riverside and Crazy is at Road Less Traveled Theater through March 31st.

Between Riverside and Crazy