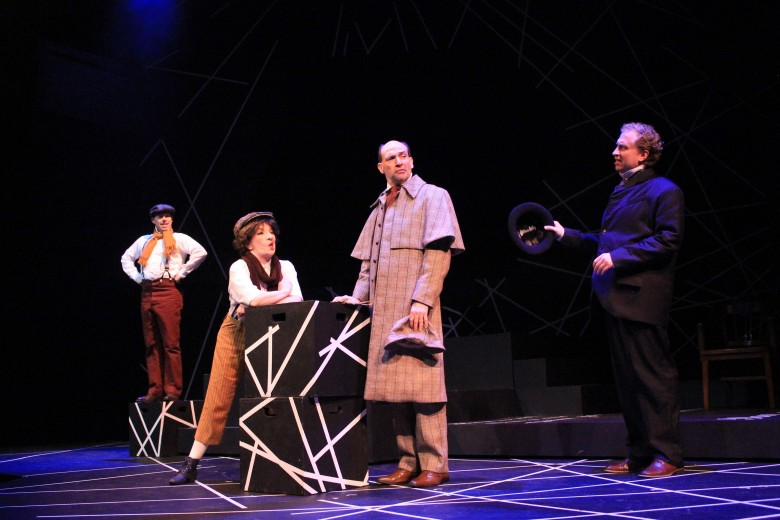 The recipe for Ken Ludwig’s Baskerville, A Sherlock Holmes Comic Mystery, is reproduced here for your viewing pleasure from the renowned cookbook, The Joy of Comedy.

Start with a famous murder mystery that tests the world’s best known fictional detective. Turn it into a comedy by Ken Ludwig, who also wrote the very popular Lend Me a Tenor.

For the base, add in a production company like MusicalFare Theatre with the chops to mount this hilarious, madcap, outrageously fast-paced comedy, presented by Shea’s 710 Theatre.

Stir in the team, at the top of their game, of Randall Kramer and Doug Weyand to co-direct, Lynne Koscielniak to create the multi-level set, Chris Cavanagh to design lighting and sound, Kari Drozd to create an amazing number of costumes, and Susan Drozd to design hair, wigs, and make-up. Allow this team to meld together their many talents to devise an evening of comic theater that will thrill and delight.

Todd Benzin plays Sherlock Holmes, the brilliant detective who possesses an ego the size of Tokyo, with wry humor and a definite belief in his own superiority.

Chris J. Handley as Holmes’ sidekick and comic foil, Dr. Watson, who has a fondness for the ladies and Sir Henry Baskerville, and who cannot quite figure out where he is supposed to be. Mr. Handley’s befuddlement is well played, as is his sense of loyalty to Holmes and their adventures.

Add three delicious ingredients: Patrick Cameron, Maria Droz, and Marc Sacco and mix them into a spicey sauce of more than forty characters with many accents, quick costume changes, ridiculous facial expressions, different and often unusual strides and gaits, and various ages. They are hilarious in their many iterations: Ms. Droz as the stern Mrs. Barrymore, the boy messenger, the lovely Beryl Stapleton. Mr. Sacco as the Castilian hotel clerk, Mr. Barrymore, Jack Stapleton, Dr. Mortimer, Hugo Baskerville. Mr. Cameron as Sir Henry Baskerville, Lestrade, a maid. And they all do more. They are a laugh-out-loud pleasure to see and each is well up to the tasks given them. Kudos to all.

Add as many comic devices as you possibly can. Use strobe lights and black lights. Have the actors race through the aisles in a storm, climbing and then falling down a hill, or chasing butterflies. Let there be opera and a child crying behind a large screen. Use video screens to denote place. Have a completely black set with quotations from Conan Doyle written on the floor, and streaks of gold bursting all over.

Boil at a fast pace for one hour and forty-five minutes. Serve piping hot.

You can taste this delicious dish only until May 19th, so get thee to 710 Main Theatre for a scrumptious feast that will leave you satiated and happy. The game is on.