Review: Barcelo on the Rocks 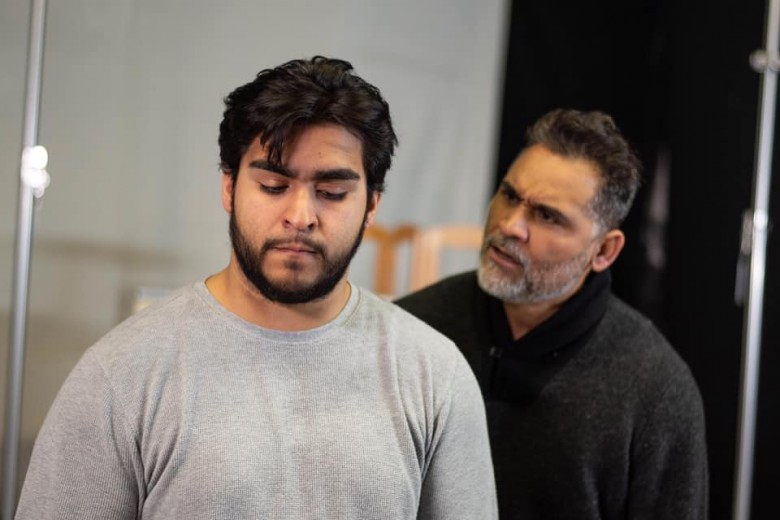 Raices Theatre Company’s new production is the English language premiere of Barcelo on the Rocks, a play by Marco Antonio Rodriguez. It opened at the Manny Fried Playhouse Friday, November 30th to a sold-out audience, with the playwright in attendance.

Barcelo on the Rocks is the story of Nino, a tortured, abusive immigrant from the Dominican Republic who fled from the dictatorship of Joaquin Balaguer (who appears in a natty suit and fedora, with his glasses shining into the lights, haunting Nino) in the 1960s and has been living for years in a small apartment in Manhattan’s Washington Heights with his two sons. Nino cleans offices for a living. As the play unfolds, we learn in flashbacks Nino’s secrets from the past that have fueled his cruelty and hatred, and his reliance on Barcelo rum, as he faces his own mortality. He states at the beginning of the play, “I don’t want to have a clear head,” and he means it.

Rolando Martin Gomez plays the central character Nino in an uneven and at times overwrought performance. He screams at the top of his lungs as he spews vitriolic hatred and filthy curses at and about new immigrants, African-Americans, his former wife, and his sons. He had some difficulty with lines opening night, which may have added to the uneven quality of his performance. He has better moments in flashbacks with his childhood friend, Jaston. Braque said, “less is more,” and in a less frantic performance, including both his rage and his love, more of Nino’s humanity could emerge, even with the scripted hate-filled dialogue.

Alejandro Gomez and Jordan Rosas are the two sons, both boys scarred by their father’s abuse. Mr. Rosas has the street punk vibe down, while Mr. Gomez is the artistic, more thoughtful son who is in college and is moving away from the neighborhood and his father’s abuse. They are charming in a funny scene, in which their brotherly bond becomes apparent, with a little help from a well-known herb.

Jake Hayes is Jaston, Nino’s boyhood friend, a Haitian immigrant. He has a great voice as he sings to Nino in one of the flashbacks. He plays the part of young man on the make in the military very well. Victor Morales is Aurelio, Nino’s revolutionary brother, who opposes the regime in the Dominican Republic. Dewel Perez is the enigmatic Balaguer.

Direction and Sound Design are by Artistic Director Victoria Perez. The sound of rain on the tin roof of the house in the DR is a very nice touch. Sheila M. Lopez designed the set, which captures the feel of a small apartment in a poor neighborhood in Manhattan yet allows for entrances and exits in several areas by the ghostly Balaguer.

In their mission statement, Raices, which means “Roots,” states: “the belief that in order to truly understand who we are as Latinos, we must celebrate the present; always looking at who we have been in the past in order to have a clear vision for the future.” Barcelo on the Rocks offers a history lesson to those unfamiliar with mid-20th century politics in the Dominican Republic, and in a larger sense, how the brutality of dictatorships can translate into brutality in some of the individuals caught up in its politics. It melds the political and the personal, often very loudly, but at times quite effectively.

Barcelo on the Rocks is at the Manny Fried Playhouse until December 16th.