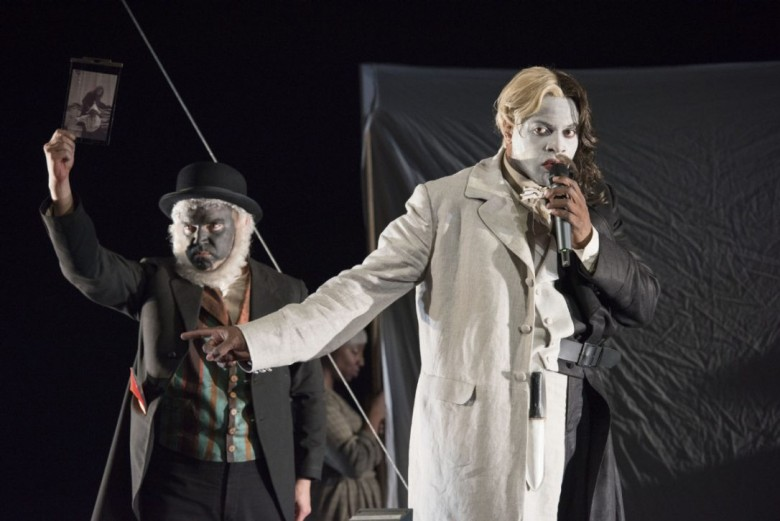 When Andre Sills as BJJ, the alter-ego of playwright Brendan Jacobs-Jenkins, quietly took the stage Sunday night in very snug underpants and nothing else, with house lights up at the Royal George Theatre in the opening scene of An Octoroon at the Shaw Festival, the people on either side of me were still reading their programs. I nudged each one, both of whom looked up in surprise at the large brown skinned man standing before them. A woman then called out, “Hello there,” and nervous laughter could be heard throughout the audience, as if we were all asking, “What is going on? Is she part of the play?” As it turned out, she was simply an audience member admiring the view.

And that began what was a string of nervous laughs, belly laughs, guffaws, awkward silences, amusement, heartfelt sadness, and impatience to get on with it already later in the play, both by the actors and the audience. In Act Four, and no, that was not the last act, Patrick McManus as Boucicault, the 19th century playwright who wrote The Octoroon, the 1859 melodrama on which Mr. Jacobs-Jenkins based his play, tells the audience “The point of the whole thing is to make you feel something”. And feel something we did.

BJJ goes on to tell us in The Prologue, that he is a “Black playwright” who decides to write a play based on a 19th century hit melodrama but he cannot find white actors willing to play brutal, racist characters. Further, he is weary of the whole concept of “Black” playwrights being somehow different from other playwrights, and that he is always being accused of deconstructing this or that every time he takes pen to paper, and he is suffering from minor depression because of it all. What is a young playwright to do? The answer comes from the therapist he tells us he cannot afford. Play the roles yourself. And so he does. He sits in front of a dressing table, angrily slathering on whiteface makeup and a blond wig while The Playwright (alter-ego of Boucicault), wearing baggy jockey shorts, stands in bright light upstage watching him. They get into a four-letter-word-slinging argument and, when BJJ leaves, The Playwright bemoans that he has been forgotten while he dons redface makeup and a braided wig and red hat to play Wahnotee, as it was also impossible to find First Nation people to play the Red Indian. Then on we go to Act One.

Plot summary: Terrebone Plantation is in arrears to the evil overseer M’Closky, who covets the beautiful Octoroon (a person who is 1/8th African) Zoe, who has been raised with love and affection by her father, the recently deceased plantation owner and his wife, and who is in love with George, the new and clueless master of Terrebone from Paris, who is also in love with her and who is being pursued by the wealthy Dora from the plantation over the mountain. M’Clusky forces a sale of the slaves in order to own the innocent Zoe. There is also an Uncle Tom character named Pete with the requisite white curly hair and beard; a boat captain; and Br'er Rabbit, that trickster bunny from African folklore.

Mr. Sills is excellent in his three roles (BJJ/George/M’Closky), as is Mr. McManus in his roles as Playwright/Wahnotee/LaFouche. I particularly like them both in their roles as BJJ and The Playwright, possibly because the modern dialogue is so well written, and their delivery is spot on. Mr. Sills, dressed as both hero and villain, has a knife fight with himself that is hilarious and frightening at the same time. Lisa Berry and Kiera Sangster as Dido and Minnie, the slave women who speak in 21st century slang, are stellar and offer modern comic relief, but also provide a deeper understanding of the roles imposed on slave women, as does Starr Domingue as Grace, the pregnant slave woman holding a white doll baby done up in blackface as she stands on the auctioneer’s table waiting to be sold. Rounding out the fine cast is Ryan Cunningham who does an excellent job in several roles, including Pete and the young slave boy Paul; Diana Donnelly as the frustrated-in-love Dora; and Samantha Walkes as the Captain and Br'er Rabbit.

Melodrama exaggerates. Everything happens in an overblown, dramatic fashion. Dialogue, gestures, postures are all larger than life and the characters have no depth. They represent the archetypes of good, evil and innocence, and as such, would be sullied by complex human emotions. Melodrama was catnip to 19th century audiences, but can be a hard sell for modern ones, so it is important that the message come through clearly and not be bogged down in extraneous hoo-ha. This production exaggerates the exaggeration, and in the over-the-topness of it, loses some of its bite. Part of that is due to the excesses of the playwright, whose characters and action do go on and on when less would be more. Director Peter Hinton adds to the excess rather than reins it in, which makes this production less than perfect, but still quite fascinating.

While we can laugh at the excesses of the melodrama, on a deeper level we are witness to the subjugation and de-humanization of entire generations of people. Blackface, whiteface, and redface are all mixed up in this mashup of 19th and 21st century racial sensibilities and in-sensibilities. An Octoroon forces us to look at how we perceive color in often uncomfortable ways, to see our history in all its nastiness, as the lovely Zoe is horrified to find out that she is 1/8th African, and therefore an abomination not allowed to marry a white man. How could this be? Yet it was and sadly, in many ways, still is. Racism takes new forms, as BJJ points out the modern concept of the “magical negro” as one example. The 1859 melodrama, which we experience as blatant and brutal racism, was actually an attempt to show audiences of the time the horrors of slavery. I wonder what audiences will think of An Octoroon 150 years from now, should they have the opportunity to see it in its 22nd century iteration.

85 Queen Street Niagara-on-the-Lake, NY ON L0S 1J0
Hilarious. Uncomfortable. Vital. An edgy new American comedy set on a slave-owner’s plantation at the Shaw festival. When Dion Boucicault wrote The Octoroon in 1859, it was considered a masterpiece.…
- Share this page -