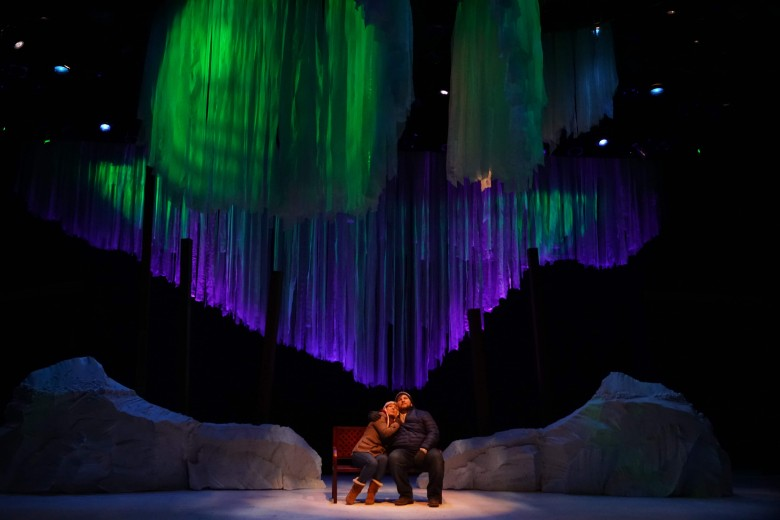 Almost, Maine is a delightful, charming, and very clever concoction of eight-plus scenes. It is a sweet, bittersweet, sad, and at times laugh-out-loud funny riff on the human heart in its many permutations. Produced by Road Less Traveled and Shea’s, it opened on February 14th at 710 Theatre and is perfect for Valentine’s Day or any other day.

It is set in mid-winter at 9:00 p.m. on a Friday night in the small northern Maine town of Almost, where the aurora borealis, or northern lights, play a role. They can be seen, sometimes but not always, in this remote and very, very cold little place, inhabited by ordinary people, some not too bright, but all in the throes of love.

Written by John Cariani, the script is chock-full of witty insightful dialogue. Steve, who doesn’t feel pain and believes he has more “deficiencies than capacities,” states “God won’t hurt me, but I should fear him,” a conundrum experienced by millions over the centuries. Then, like Sleeping Beauty, Steve is awoken by a kiss. Colloquialisms and metaphors are rendered literally—love given is returned as giant red bags; a broken heart is clutched in a small paper bag. The scene that garnered the most laughs, “They Fell,” is in Act Two, and it's a doozy.

Scenes are meant to take place simultaneously, as four actors play 20 different roles of people in various stages of romantic relationships. Eve Everette, Wendy Hall, John Kreuzer and Nicholas Lama carry the whimsy, excitement, fear, goofiness, sweetness, sense of loss, and anger of all 20 characters and they are just great. Each has a clear sense of the character being played, each with its own personality, quirks, and feelings.

Eve Everette has a kinetic energy that works very well in her roles. In “Her Heart” it is as if her words are all crowded together in her mind and she can’t get them out fast enough, while in “Where It Went” she tries not to say what’s in her mind at all. Wendy Hall is the embodiment of the tough-girl tomboy Rhonda who knows everything about all-terrain vehicles and nothing about love in “Seeing the Thing.” John Kreuzer has the goofy-doofus guy down pat. Nicholas Lama portrays a sweet cluelessness in the Prologue, Interlogue, and Epilogue as well as in “This Hurts.”

There is more, much more from each of these actors in this excellent production directed by Doug Weyand, who shows a sense of play and whimsy, along with the ability to keep the combination of comedy, sweetness, and sadness finely mixed without any one of them overwhelming the others.

He and his Production Team are at the top of their game, creating a sense of time, place and freezing outdoor temperature on a minimal set. The set, designed by Lynne Koscielniak, gives off an appropriately icy feel with two large snowbanks upstage, and icicle-like fabric hanging on the back wall and above the stage. The northern lights play colorfully around and through the fabric in patterns by Light Designer John Rickus. The icy feeling is enhanced by the puffy coats, boots, gloves and wool hats by Costume Designer Maura Price.

Almost, Maine is one of the most produced plays in the nation, and this production is a great example of why this is so. The script never veers into melodrama or schmaltzy sentimentality, which is so often the risk in tales about love. The play is instead smart, bright, intelligent and very human. All those qualities are on display at 710 Theatre. It is a warm and wonderful treat on a cold winter’s day.

Two performances remain on Saturday, February 23 at 8:00 pm and on Sunday, February 24 at 2:00 pm. Slip into your puffy coat and indulge in the warmth of the great frozen north.

710 Main Street Buffalo, NY 14202
One of the most-produced plays in the United States, Almost, Maine is a whimsical series of nine vignettes about love in a snow-covered town. Four actors play the 20 residents of the fictional town of…
- Share this page -