Review: A View From The Bridge 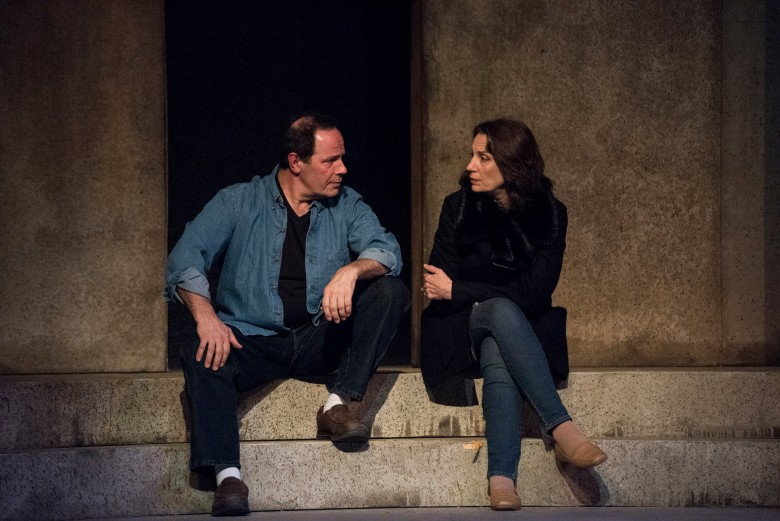 John Fredo and Debbie Pappas Sham in "A View From The Bridge" at Kavinoky Theatre
- Share this page -
The stage is backlit by a single blue light. The set is that of an ancient Greek amphitheater, a stone semicircle with two steps all around up to a series of tall, flat, rectangular walls with openings between. We hear the mournful cry of a ship’s horn - once, twice, again. The stage goes dark and then is fully lighted with the players in a semicircle upstage. The chorus, a nattily-dressed, self-proclaimed lawyer, stands center stage and describes and comments on what we are to see in Red Hook, Brooklyn, “the gullet of America,” where dockworkers toil from dawn to dusk. There will be nothing highbrow, pretentious, or amusing here. There is no doubt that what we are about to witness will be gut-wrenching tragedy.
According to Aristotle, Greek tragedy evolved from ancient satyr hymns to Dionysus, the god of wine, ritual madness, wild frenzy, and fertility. In Dionysian tragedy, the protagonist is overcome by his passions, which in turn lead to his fall. The tragedy is played out by the characters on the stage, each having his or her part, but none having the power to change the outcome, as the chorus will remind us several times during the play.
In “A View from the Bridge,” a modern tragedy by Arthur Miller now playing at the Kavinoky Theatre, Eddie Carbone, a dockworker in Red Hook in the 1950s, is brought down by his increasing inability to control his passion for his young niece, Catherine, and by his denial that his love for her has become emotionally incestuous. This tortured soul does not understand what is happening to him as he becomes more obsessed with her and with his hatred of the young Italian immigrant he has sheltered, and whom she loves. As his obsession leads to betrayal, not only of the immigrants, but even more sadly, of his own principles and beliefs, his behavior becomes more out of control and violent. He demands of everyone around him, “I want my respect!  I want my respect!” over and over while he spirals down into madness and destruction.
The play is beautifully written, and the excellent cast is up to the task of telling this tragic tale. John Fredo is superb as the doomed Eddie, a man who thought he knew his place in the world and was content with it. In Eddie’s descent, Mr. Fredo holds nothing back. He is completely open - all of his hope and disappointment, his confusion and passion and love and obsession and impotence there for us to see. Debbie Pappas Sham shines as Beatrice, Eddie’s wise wife who understands what is happening and unsuccessfully tries to stem the tide. Renee Landrigan as the niece, Catherine, the girl becoming a woman, is convincing in her confusion as to her place in her relationship with Eddie, while becoming the lover of Rodolfo, the immigrant who Eddie despises. Adam Yellen as Marco, one of the immigrant brothers sheltered by Eddie and Beatrice, plays his part with passion and intensity. Adriano Gato as the other brother Rodolfo, is more reserved and cool, and is the perfect foil for Eddie’s increasingly outrageous projections. Peter Palmisano gives us the lawyer-chorus, Alfieri, with a dispassionate, yet engaged presence.
Robert Waterhouse does a fantastic job with this famous play. There isn’t a false note or an extraneous movement anywhere from beginning to end. (I refuse to acknowledge the appearance of the cellphone). I note that in the program Mr. Waterhouse mentions he directed another Dionysian play recently, Louisiana Bacchae, which I saw and was entranced by. I look forward to his third encounter with that wild and unpredictable god.
A View from the Bridge, while set sixty years ago in a neighborhood that no longer exists, is timeless. The tragedies of Sophocles, Aeschylus, and Euripides are as relevant today as they were 2500 years ago when they were written. There are Eddie Carbones in every society in every age. And there are the people around them who are powerless to help them and who consequently suffer with them. This is a cautionary tale that tells us that no one is exempt. Not you. Not me. Not then. Not now. This is the face of tragedy. And this is what Arthur Miller has so brilliantly guided us to understand in his play.
Performances from March 3 – 26, on Thursdays, Fridays and Saturdays at 7:30pm,
Saturdays at 3:30pm and Sundays at 2:00pm

A View From The Bridge