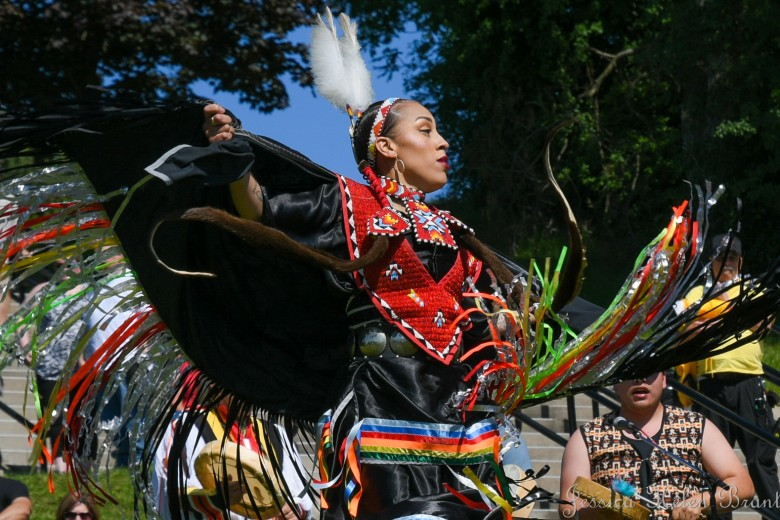 The message at the first Strawberry Moon Festival celebrated at Artpark was loud and clear: We, as a people, are together under one sky. The following are moments captured from this spiritual and emotional gathering, which brought together Six Nations tribes as well as First Nations tribes, including Montreal Canadian band the Sam Roberts Band and Canadian artist Alan Doyle, Thunderhand Joe and the Medicine Show, featuring former drummer from the Native American rock band Redbone.

Thunderhand Joe provided in between commentary in which the audience members learned that their 1974 radio tune "Come and Get Your Love" was placed in the 2014 Marvel movie Guardians of the Galaxy, making Redbone one of the first Native American bands to break into mainstream cinema. This was the last song they played in their set that evening.

The final performance of the night featured popular DJ collective A Tribe Called Red, who invited Native American dancers on stage to interpret traditional Iroquois drum beats with EDM and live electronic drum machine samples to create powwow step sonicscapes. A Tribe Called Red gained their following through their strong stance on aboriginal rights, and their bold enterprise in battling against indigenous prejudices through Native American youth advocacy and the underground club movement.

Through expressive dance form, including the rabbit dance, round dance, hoop dancing, and smoke dance, festival attendees were invited into the sacred and protected world of Six Nations tribes, a greater understanding of their environmental policy and practice, as well as the fundamental and cultural values that hold these Haudenosaunee communities together. It is these values that the members of Cayuga, Seneca, Oneida, Onondaga, Tuscarora, and Mohawk tribes are raised upon that create the storytelling moments of impact above.

Rather than snapshot a gathering of indigenous people, the above aims to teach, inspire, and help others understand through anthropological vantage points and perspective, the strong and steadfast people that are the Six Nations tribes of WNY and Canada.