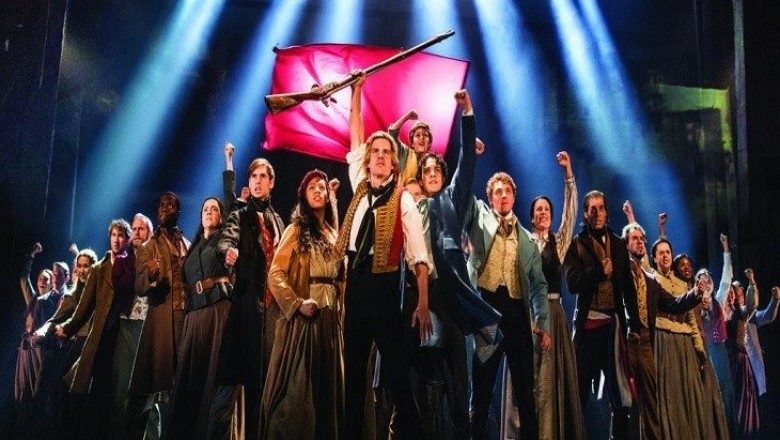 ‘Twas two weeks before Christmas and over at Shea’s
The audience departed all in a daze.
They staggered to their homes and dropped into their beds
With visions of Valjean and Javert dancing in their heads.

In other words, a gorgeous production of the 35-year-old musical, Les Miserables, is on display at Shea’s this week. The term “iconic” is often used to describe this three-hour spectacle in which unrelenting misery is the order of the day, and almost everyone dies. According to a recent New York Times article, Les Mis has been seen by more than 70 million people in 52 countries and been translated into 22 languages. Whew!

The story centers around Jean Valjean, a young man who steals a loaf of bread and is imprisoned for 19 years. Upon his release, he breaks parole and is pursued for decades by Inspector Javert, who believes God has ordained him to bring Valjean to justice. Years later, a young woman named Fantine dies and leaves her child Cosette in the care of Valjean, now a factory owner and the Mayor of Montreuil-Sur-Mer. Valjean is forced by his conscience to free a man accused of being him, and he and the child Cosette flee from Javert to Paris, where the rest of the tale takes place.

This version, first on Broadway in 2014, drops the “iconic” revolving stage and instead uses projections to change scenes which are inspired by paintings by Victor Hugo, who created Valjean’s nightmare in his very lengthy (more than 2,500 pages) 1862 novel. Taking place post-French revolution over a period of years, and including the June 1832 doomed student rebellion in Paris, the themes are of morality and amorality, justice and the lack thereof, the horrors of extreme poverty, and the torment caused by fanaticism, among others, both political and religious.

The projections work very well to convey the streets and sewers of Paris, other places, and sometimes even moods. Javert’s scene on the bridge is riveting as he sings his final “Soliloquy” and falls into the river.

Voices soar throughout, and for me are the best thing about the musical. They are beautiful. “Stars,” sung with deep feeling by Preston Truman Boyd as the fanatic Javert, is outstanding, as is his “Soliloquy.” His entire performance as the detective who pursues the reformed thief Valjean over decades is compelling. The same can be said of Patrick Dunn as the tormented Valjean. Their range and phrasing perfectly suit the mood of the story. Fantine’s “I Dreamed a Dream” sung by Mary Kate Moore, Eponine’s “On My Own” sung by Phoenix Best, and Marius’ “Empty Chairs at Empty Tables” sung by Joshua Grosso, all express great feeling, using their splendid voices to convey sadness, love, and longing. The musicians, led by Brian Eads, are superb, expertly playing the lustrous score and never overpowering the singers.

Young Jasper Davenport shines as the street child/revolutionary Petit Gervais/Gavroche. His acting ability, facial expressions and use of his middle finger are quite engaging.

Many scenes contain sometimes one, sometimes a series of images, using the actors as a tableau, reminiscent of paintings and portraits set on canvas. While visually appealing, the tableaux stop the action, sometimes just for a few seconds, but enough to give a static feel to the proceedings. This choice by Director Laurence Connor is jarring and interrupts the flow of the story.

The other jarring element is the Thenardiers, the couple whose greed knows no bounds and who will do anything for a franc or a sou, causing Valjean and Cosette no end of trouble. They act as comic relief in this otherwise extremely serious story and seem out of place with their jolly, ribald evil. Overly made up and costumed, they might have wandered in from a burlesque. Michelle Dowdy and Jimmy Smagula do a fine job in the roles, though.

An aura of darkness is present in almost every aspect of the production. Diffuse lighting with occasional spots, use of stage fog, and the dark, massive set all contribute to the sense of foreboding that is so central to the musical.

Much has been written and much has been said about Les Miserables over the years. This production has all the elements of a big musical. It is visually impressive, with a multi-talented cast, a brilliant score and excellent technical values. It is operatic in scope, and people all over the world love it. I saw it many years ago, and while I enjoyed it then and now, love is too strong a word for my experience of it. But perhaps not for yours.

Les Miserables is at Shea’s through December 15th.