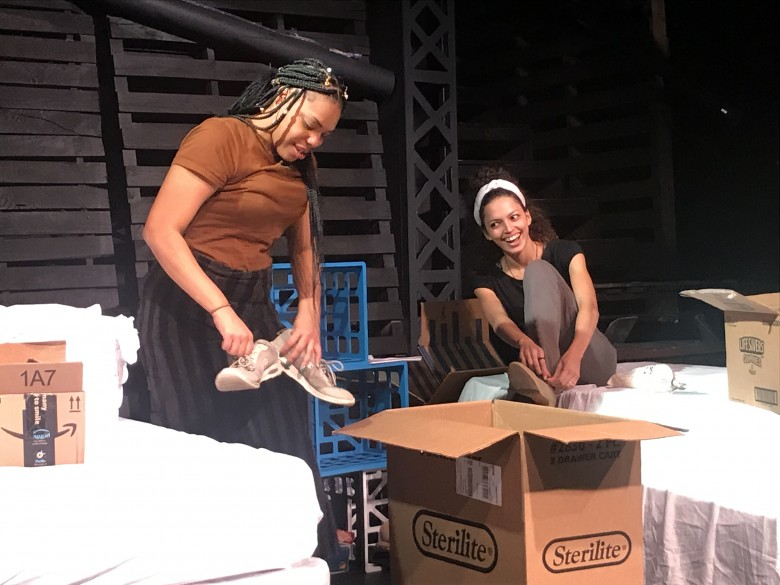 Suicide, grief, and family discord are explored at the Paul Robeson Theatre in the intense drama, Jump, by Charly Evon Simpson, a winner of the Paula Vogel Playwriting Award.

At the opening of Jump, an anxious man stands on a suspension bridge, smoking. He extinguishes his cigarette and positions himself to jump off the bridge into the water below. He stays there for a long minute, then finally returns to safety. Not this time. Next time..?

Fay is a 20-something woman whose mother had died a year previously. She and her sister, Judy, are tasked with going through their shared childhood room to clear out their belongings. Will the house be sold? Their alcoholic father has not stayed there since their mother’s death. There is a view of the bridge from the house. Their mother took them there when they were children—the same bridge from which the man contemplated jumping. Fay goes there to remember and to be alone with her thoughts. She meets the suicidal man. They speak and, over time, meet again and again on the bridge. What are they both doing there?

Time is fluid in this play. The scenes change from the family home to the bridge, with no indication of when each scene is occurring, a device that gives a sense of the confusion in Fay’s mind. She sees flashing lights and feels at times like she is losing her mind. Mental health issues during her teenage years are hinted at. Judy is three years older and married, a much more “together” woman. While at the family home they spar about their childhoods, about smoking—Fay is into vaping—about their very different lifestyles, yet they also enjoy shared memories. Is this taking place in the present, or at some time in the past?

Aqueira Oshun is Fay. She gives a strong performance, expressing confusion about what is happening in her mind, rage at her father for his cruel words, and tremendous grief over the loss of her loved one. She banters with the man on the bridge, conveying that she knows she is being unreasonable at times.

As her sister Judy, Dayane Araujo demonstrates a superior attitude as the older sister because she has done all the right things—getting married, dressing well, and generally being the favored child. The interactions between the sisters in their childhood home are very much in keeping with sisters who are very different but share a common bond.

Marcus Thompson, Jr. is Hopkins, the man on the bridge. Andy Finley is Dad. They both play their parts well. Dad’s surprising revelation to Fay is well handled by Finley.

The bridge is as much a character as the people in this play. It represents the best and worst of times for the people involved, and the word itself suggests connecting one thing with another. In this case, it forms a connection between the people, for good and for ill, and between the past and present.

Al Garrison designed the set, which seems crowded, but the bridge works very well. Set against the back wall, it has the look of an old bridge with lights on the cables. The box-filled house below truly looks like a place that has not been updated in a very long time.

Director Paulette D. Harris has set a rather slow pace for the dialogue. People are careful about what they say, until their emotions take over. Then they become more explosive.

The playwright highlights the social norm of saying “fine” when anyone is asked how they are, which can mask the pain and fear they feel. It avoids the humiliation of being perceived as weak or a failure. What it also does is isolate people from each other. That is one of the themes explored—how we can live in very close proximity to one another and know very little about our respective suffering. The play suggests that we take a closer look and be as kind and helpful as we can. It is a powerful reminder that we are all in this together.

Jump is at Paul Robeson Theatre through February 9th.

350 Masten Ave. Buffalo, NY 14209
Jump is about flickering lights, vapes that fall from the sky, old homes, and a young woman who finds solace on a bridge. Judy is a millenial who is coping with the death of her mother. Fay engages in…
- Share this page -