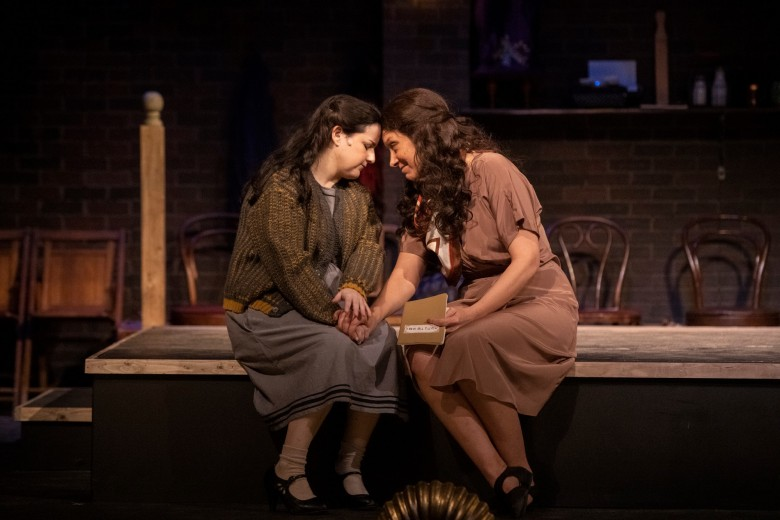 Indecent, expertly directed by Kristin Tripp Kelley, is a multi-layered, beautifully produced play that feels balletic in movement as it explores themes of antisemitism, homophobia, sexism, and political persecution in the first half of the 20th century in Europe and America through the history of Yiddish playwright and novelist Sholem Asch’s play, The God of Vengeance. In the controversial 1906 play, a Jewish brothel owner, attempting to expiate his own guilt, becomes obsessed with his daughter’s purity, purchases a Torah scroll and seeks a marriage between his daughter and a rabbi’s son. When he discovers that his daughter has fallen in love with one of the prostitutes in his brothel, in retribution, he condemns her to that same life.

Written by Pulitzer Prize winning playwright Paula Vogel, Indecent is at once personal and universal. It traverses the joys and triumphs of Asch’s play, from the capitals of Europe, to its vilification in the American Orthodox Jewish community in the 1920s, the subsequent arrest of the cast and producer for indecency, the horrors of the holocaust as the play is produced by starving Jews in an attic in the Lodz ghetto in the 1940s, and to Asch’s encounter with the McCarthy anti-communist hearings in the 1950s. Each era is personalized by stories within the story, of people involved with the play, revealing changing cultural norms.

While serious in subject, Indecent is brimming with humor and light touches as the cast sing, dance, and tell stories. Through Jewish music and dance, German cabaret songs a la Marlene Dietrich, American musical numbers including a nod to the Rockettes, and even the delightful series of bows taken by the cast of The God of Vengeance, the passion and love of life of the Jewish people are celebrated in Indecent.

As cast members sit on mismatched wooden chairs upstage, a man named Lemmle (Jordan Levin) acts as Stage Manager, standing downstage to explain what will transpire as the play progresses. Actors move on and off the stage, sit in the chairs or on upturned suitcases, go into the dimly lit open wings to change costumes hanging on a rack, become a different character with a different accent. Musicians, led by Musical Director Joseph Donohue III, sit in the wings stage right when not partaking in the action center stage. Choreographer Lynne Kurdziel Formato has created a fluidity of movement by the cast, who seem to be in constant graceful motion. Dialect coaches Amanda L. Sharpe and Saul Elkin have done a great job fine-tuning accents, which are a very important element in the play.

Playing a variety of roles, the cast is superb. Aleks Malejs as the prostitute and Arin Lee Dandes as the virgin daughter have very good chemistry and are charming in the famous rain scene from The God of Vengeance. Both play other roles, as well. Adam Yellen has two very fun comic turns as a pimp and the playwright Eugene O’Neill, in addition to his more complex role as the young and middle-aged Sholem Asch. Peter Palmisano has some funny moments in the German cabaret in addition to his role as the obsessed brothel owner. Matt Witten, Debbie Pappas Sham, Saul Elkin, and musicians Maggie Zindle, Megan Callahan and Benjamin Levitt round out the fine cast.

The themes in Indecent are as relevant today as they were in 1906, and the stories it tells capture both the depravity and the beauty of the human spirit in a powerful and engaging evening of theater.