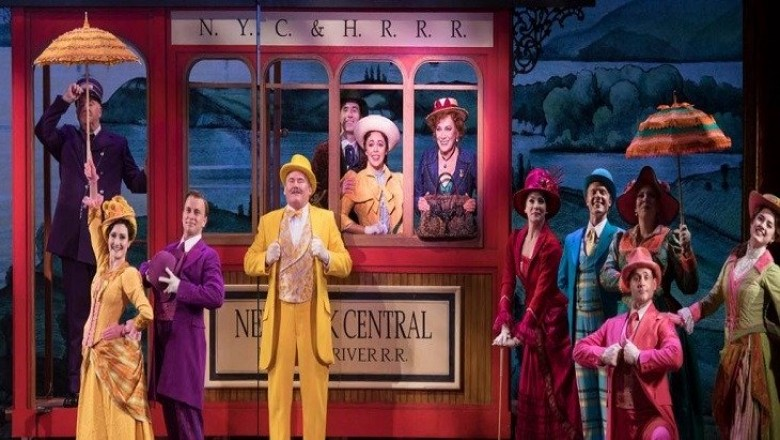 Dolly Gallagher Levi, matchmaker extraordinaire, first graced the musical stage in the person of Carol Channing at the St. James Theatre on Broadway on January 16, 1964. Since then, she has spread her particular brand of chutzpah and charm on stages 'round the globe, arriving at Shea’s Performing Arts Center on March 10th in a production that is smooth, polished and luscious. Colorful, exhilarating, uplifting, witty, corny in an endearing way, often silly, HELLO, DOLLY! never takes itself seriously, and is entertaining as all get out.

The musical is set in New York City in 1885. Dolly has been widowed for 10 years and is weary of being alone and fending for herself. She has decided to marry Horace Vandergelder, a miserly half-a-millionaire hay and seed merchant in Yonkers that she has set up to marry the milliner Irene Malloy. Of course, first she must convince Horace to decide Irene is not the woman for him, and then convince him that he has decided that she, Dolly, is the woman for him. Along the way, several other couples meet their matches, including Irene and Horace’s clerk, Cornelius. Love is definitely in the air.

Carolee Carmello has it all as Dolly. She has perfect comic timing and a powerful voice that can be sweet, sexy, comic, and even a bit crass. She exudes warmth and wit and you can tell there is shrewdness behind those twinkling eyes. She engages with the audience as though we were all good friends having a little chat about life and love and the purpose of money, which is like manure—no good unless you spread it around. She makes it clear that we are all in this together, having some laughs and enjoying the ride. And what a ride it is.

John Bolton is a worthy adversary for Dolly as Horace. He is curmudgeonly and dour, but then shows sly humor in “It Takes a Woman” (“It takes a woman all powdered and pink, to joyously clean out the drain in the sink”), and "Penny in My Pocket," wherein he explains how he made his fortune. And can that man dance. What more could a widow on the make ask for in a half-a-millionaire?

The supporting cast are all excellent. Each brings a clear personality to their roles and they are gifted singers and dancers. Daniel Beeman is a standout as Cornelius, the first-time lovestruck 33-year-old clerk.

The musical numbers by Choreographer Warren Carlyle dazzle. The very athletic “Waiters’ Gallop” amazes with plates flying, dancers sliding down the central staircase, while others race around in perfect synch with one another. The strolling couples in “Put on Your Sunday Clothes” seem to glide across the stage in their gorgeous bright green, yellow, and blue costumes, all bustles, parasols and bowler hats. The signature “Hello, Dolly!” number as she enters Harmonia Gardens Restaurant in a bejeweled red gown is stellar, with Dolly and the staff greeting each other in a joyful reunion.

The stage is shortened by a circular arch that cuts off the sides, so all the action takes place center stage. The sets are highly stylized, with colorful painted backdrops of train stations, cable cars, and streetscapes of 19th century New York City and Yonkers. The courtroom in Act Two has an oversized, off-kilter judge’s bench and prisoner dock that gives a comic feel to the comic proceedings.

The sound quality is first-class. Each word and lyric are clearly articulated and heard, and the superb orchestra, led by Ben Whiteley, never overpowers. It includes 13 local musicians in addition to those in the touring company.

Directed by Jerry Zaks, HELLO, DOLLY! is brimming with color, joie de vivre and a luxurious sensuality, from the red velvet curtain trimmed in gold, to the many gorgeous costumes and elaborate hats, the memorable tuneful songs by Jerry Herman, the stunning choreography brought to life by talented dancers, and the accomplished acting, singing, and dancing by the cast.

HELLO, DOLLY! is an old-fashioned musical, one of the last of the Golden Age of musicals. It was my first Broadway show—dare I say it was in 1964 at that very same St. James Theatre—and I was hooked on its sense of unbridled fun. It holds its charm to this day without pretending to be modern or meaningful. It just entertains like crazy. So glad to have you back again, Dolly.

HELLO, DOLLY! is at Shea’s through March 15th.

646 Main Street Buffalo , NY 14202
The universally acclaimed smash that NPR calls “the best show of the year!” and the Los Angeles Times says “distills the mood-elevating properties of the American musical…
- Share this page -