Christmas Over the Tavern @ Shea's 710 Theatre 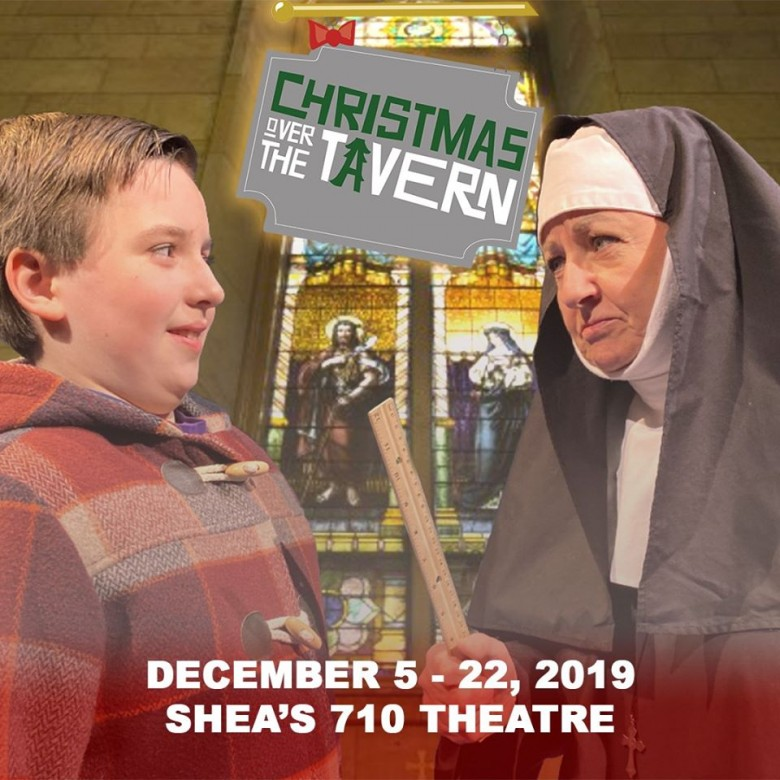 Ah, the 1950s in South Buffalo, a place where the ratio of bars to churches leaned in favor of the gin mills, where the Catholic church with its bevy of black and white clad nuns ruled the schools with scary efficiency, where fathers ruled the roost, and divorce was an almost unheard of scandal. It was the decade for children to be seen but not heard, and compliance to rigid religious tenets was backed up by the threat of hellfire and damnation, or worse, to be sent to the principal’s office.

Playwright Tom Dudzick captured the joy and angst of those times through the working-class Pazinski family in his Over the Tavern trilogy, a semi-autobiographical trio of comedies based on his early years in Buffalo. Chris Jones of the Chicago Tribune called the trilogy “one of the biggest grass-roots successes in American regional theatre of the last few years.”

Last season, MusicalFare Theatre produced the world premiere of his musical, Christmas Over the Tavern, wherein the Pazinskis suffer through Dad’s Scrooge-like humbuggery over a period of a few days leading up to the big day. One reviewer (me) said, “Mr. Dudzick has captured a time and place in our history with warmth and wit, blending the comic and the tragic, while he pulls no punches about patriarchal and parochial dominance in the lives of the Catholic working class in the 1950s, and the often-negative effects that dominance had on the spirits and creative drive of those impacted.”

Since last year, Mr. Dudzick has tweaked the musical, but it maintains its wit and bite, and is a great deal of fun to watch in the new production at Shea’s 710 Theatre as the Pazinskis, Sister Clarissa, and a couple of special guests are put through their paces. References to '50s pop culture abound, and some throwaway lines are priceless, as when the Savior reading a bible offhandedly comments, “I never said that,” or Rudy questions, “Did Jesus ever laugh?”

While the larger stage at Shea’s 710 Theatre opens up the set and allows more room for the actors to move around, the intimacy of the smaller venue is gone. On the other hand, the entire run sold out last season almost before the show opened, so the larger venue will allow more people to see this very entertaining Christmas musical. The Buffalo skyline backdrop remains, as does the very 1950s kitschy kitchen in the set by Dyan Burlingame.

The three Fesmire brothers, all comfortable in their roles, play the Pazinski boys. Joel is new to the cast, and is a delight as Rudy, the boy comedian who just wants to have fun and make people laugh, and mixes it up with his nemesis, Sister Clarissa. A home-schooled 7th grader, he does excellent impersonations of Groucho Marx and Ed Sullivan, and his exuberance and comic timing are spot on. Samuel Fesmire plays Eddie, the more serious older brother who wants to contribute more to the family coffers. Isaac Fesmire is very good as Georgie, the mentally challenged brother. He has a sweet dream sequence and song, "Hey, Santa," that address his Christmas wish.

Also new to the cast is Peter Horn as the father. He plays Chet as a depressed and angry patriarch, a man who peaked early and has not come to terms with his current life. That role having few comic moments, he is counterpoint to the liveliness of his children and kindness of his wife. He plays two other roles in dream sequences and has a great deal of fun with those.

Reprising their roles, Wendy Hall is fine as the mother, Ellen, as is Caroline Schettler as the anxious Pazinski sister, Annie. Pamela Rose Mangus as the Every-Nun, Sister Clarissa, has it down to a T. That very first clicker sound and the look on her face as the show begins says it all. She is a hoot.

Some songs fare better than others. “Laugh It Up Boogie” seemed a little forced in its yuk-yuk vaudeville-like energy. Sung by the children, “Santa Claus Is Comin’ to Seneca Street” is great fun and “Why Can’t It Be Like On TV” speaks to their desire for harmony in their family, as does Ellen’s lament “I Want My Guy Back for Christmas.” The dream sequence song, “Thou Gotta Be Thee” is a tongue-twisting delight.

MusicalFare Artistic/Executive Director Randall Kramer directs his fine cast with a sure hand. Choreography is by John Fredo, Lighting and Sound by Chris Cavanagh, and Musical Director is Mark Vona. Costumes by Kari Drozd are very '50s.

This being a Christmas show, all’s well that ends well. The more biting satire is leavened by gentle humor, and a denouement that sends its audience smiling into the night. It is a dose of nostalgia for those who survived the '50s, and a glimpse into the world of their parents and grandparents for the younger set.

Christmas Over the Tavern, a MusicalFare Production, is presented at Shea’s 710 Theatre through December 22nd.

Christmas Over the Tavern