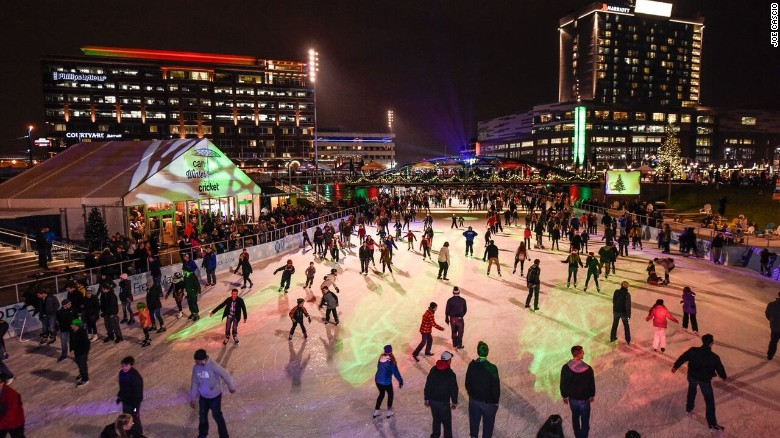 The Ice at Canalside | Buffalo, NY
- Share this page -

Imagine having to choose just 16 intriguing things to see and do in the U.S. in 2016. That's what CNN's Marnie Hunter and Katia Hetter were charged with doing. The article, published on January 8, 2016, includes Alaska's national parks, the Smithsonian National Museum of African American History and Culture, and - Buffalo, New York:

"The renaissance of the upstate New York town of Buffalo is due, in part, to its celebration of its past as a transportation hub and site of great architecture.

"The western terminus of the Erie Canal is what's now called Canalside, an all-season entertainment district where you can ride ice bikes and skate during winter.

"Once a feature of one of the world's largest grain ports, the enormous grain elevators dotting the area are inspiration for the Silo City performance art space and a nightly Canalside light show.

"For architecture buffs, the $50 million restoration of Frank Lloyd Wright's Darwin Martin House Complex should be complete in the fall, and visitors can see more Wright work on upcoming "All Wright All Day" tours.

"Also slated to open in 2016, the Hotel Henry will give the former Buffalo State Asylum new life as a boutique hotel.

"Not sure what to do first? Stop by local cafe Sweetness 7 and chat with owner Prish Moran, known as "Buffamama" to the locals."

Heck. It's almost as hard to choose just six places to visit on Buffalo as it must be to choose just 16 places in the entire country. Go Prish! Those Sweetness 7 homemade bagels really are awesome.