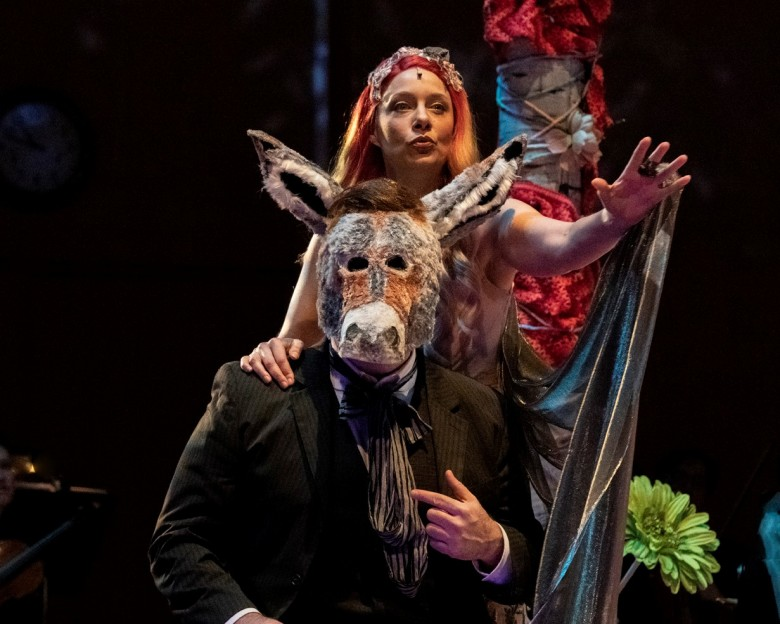 The fairies have alighted at Kleinhans Music Hall this weekend in a swirl of sound, color and magic that pulsate throughout the beautiful hall in the woodland romp that is Shakespeare’s A Midsummer Night’s Dream.

In a perfect blend of music and theater, the Buffalo Philharmonic Orchestra conducted by JoAnn Falletta, and the Irish Classical Theatre under the direction of Fortunato Pezzimenti, have created a delightful frolic that engages the senses from start to finish. One can almost detect the scent of the enormous flowers that festoon the stage wafting into the audience.

The music is Felix Mendelssohn’s Incidental Music to A Midsummer Night’s Dream, Op. 61. A German Romantic composer of the early 19th century, his opus, according to those who write for AllMusic and are much more knowledgeable about the history and classifications of music than this writer, “combines the traditional forms and structures of classical music with the feeling and expression of the Romantic era.” “Feeling and expression” are the key words for those listening to this gorgeous music that feels like it is embracing the play, enhancing its light and airy feel, elevating it to an even higher level of sensual enchantment.

Staging for the play by David Dwyer, divides it into three sections: two Doric columns delineating the palace of the Duke of Athens, Theseus, stage right; garlanded trees and voluptuous vines and flowers center stage where the fairy queen, Titania, sleeps in her bower; and a rustic cabin stage left for the bumbling actors, or mechanicals, who perform the Interlude, Pyramus and Thisbe, at the weddings. In addition, video projections designed by Brian Milbrand on the shell surrounding the stage enrich the settings with images of huge Doric columns and caryatids that surround the palace, a forest of trees, and a blinking night sky.

The large cast expertly handles the dialogue and characterizations, often while racing through the forest. Aleks Malejs is superb as Titania, the fairy queen. She is light as air, a gossamer presence who barely touches the ground as she moves through her domain, her voice like a melody. Her counterpart, Vincent O’Neill as Oberon seemed flat in comparison, so unusual for that talented gentleman. Brendan Didio is great fun as Puck. He is light as a feather springing through the forest, a wicked little grin on his face. Phillip Farugia is a hoot as Bottom, the maladroit actor turned into a donkey by Puck. He is hilariously inept. The mixed-up young lovers (Kayla Storto, Kit Kuebler, David Wysocki and Nick Stevens) are first-rate. As is everyone else in this very fine cast, all of whom appear to be having as much fun as the audience, except for poor David Lundy as the very very nervous Starvling.

Songs are performed by The Women’s Choir of Buffalo, directed by Kathleen Bassett. Karen D’Angelo and Maria Parker are the fairy soloists. They both have beautiful voices, although it was difficult to understand the words as their voices did not carry far into the audience.

A Midsummer Night’s Dream, an original work by Shakespeare, is a comedy that never ceases to delight, even in this abridged version. Mendelssohn’s music, which includes that very famous Wedding March familiar to anyone who has ever been anywhere near a wedding, is a heavenly addition to the play.

All in all, an absolutely intoxicating brew. Kudos to everyone involved.

There are but two performances remaining, one on Saturday at 8:00 p.m., and another on Sunday at 2:30 p.m. This is a must see for both music and theater lovers. So be not fools, ye mortals. Get thee to Kleinhans this weekend. You will be glad you did.

3 Symphony Cir Buffalo, NY 14201
A collaboration between Irish Classical Theatre Company & the Buffalo Philarmonic Orchestra! The stage will be set for romance as the mystical faerie kingdom and the humdrum world of humans converge…
- Share this page -