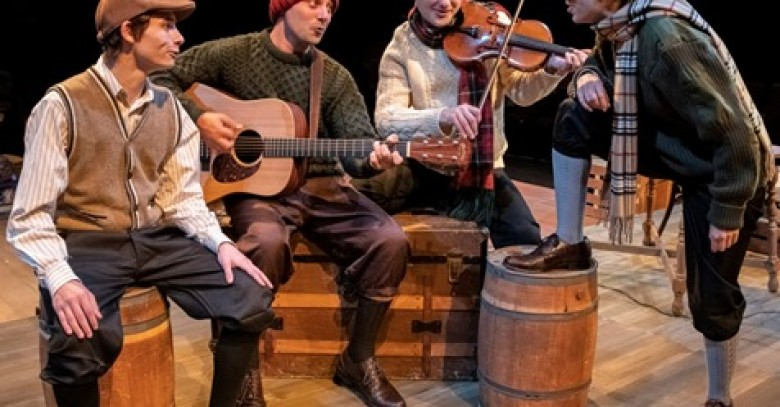 Looking at childhood Christmases through the bifocals of age is a pastime that warms the hearts of those sitting at table or around a fire celebrating Christmas present, or just quietly reminiscing to a friend about the time the tree fell over onto Aunt Pearl, or the oven stopped working mid-turkey-roasting, or Uncle Eugene scored a five-day pass from the Army and surprised everyone on Christmas Eve. When the person reminiscing is Dylan Thomas, Welsh poet and writer of the prose poem, A Child’s Christmas in Wales, the stories resonate with lyrical language and sly wit.

Adapted as a musical in 1982 by Jeremy Brooks and Adrian Mitchell, some of the songs in A Child’s Christmas in Wales are traditional Welsh in origin, and evoke a spirit and nostalgia for a gentler, simpler time that exists in the imaginations of former children everywhere. It is also peppered with some very witty ditty’s, one about serving a drink for the postman (played to the hilt by Christian Brandjes) when he calls with Christmas parcels.

Opening the musical, narrator Vincent O’Neill cruises the stage artfully speaking Thomas’s words that evoke a time and place from his childhood, where “All the Christmases roll down towards the two tongued sea, like a cold and headlong moon bundling down the sky that was our street, and they stop at the rim of the ice-edged freezing waves…” O’Neill enters at various times to move the story along to the next memory, where the remainder of the large and first-rate cast act out the tale.

At the heart of the story are Young Dylan and his parents, a family in the town of Swansea on the Atlantic coast of Wales. Tyler Eisenmann, a 10th grade student at Frontier High School, excels in the role of the imaginative, exuberant boy who grows into the famous poet. Having a lanky frame and bright presence, he handles the songs, dancing, and dialogue with aplomb. Ben Michael Moran plays several roles, the main one being Father. His baritone is in fine fettle in songs sweet and silly. His turn as the old man in the park is hilarious. Michele Marie Roberts is Mother, who is a warm woman with that sharp tongue so beloved by the Celts. She is very funny when the newfangled gas stove gets too hot.

The mood is upbeat, the foibles of the aunties and uncles who arrive en masse for Christmas dinner are more charming than disturbing. Hannah (a very funny Nicole Cimato), puts rum in her tea but once a year, yet carries a flask inside her dress, and becomes increasingly inebriated as the evening wears on, resulting in some ear-splitting singing. Tudyr (a very dour and pessimistic Gregory Gjurich) sees only the worst in everything. He is married to the pill-popping, outgoing Bessie, played with great comic timing by Charmagne Chi. Megan Callahan is the ephemeral Elieri, who brings magic to Young Dylan. Karen Harty is Nellie. Brittany Bassett and Renee Landrigan are the giggly, screechy, annoying cousins Brenda and Glenda.

The only caveat to this otherwise very engaging production directed by Chris Kelly—the children’s games. They find themselves in jungles, deserts, fighting horrible cats and other monsters in the town park and by the sea. The scenes are paeans to the imaginations of youth living in an isolated town, where a gas stove is a novelty and telephones and radios have yet to make an appearance. However, they go on too long, causing one to wish the little darlings would just move along. It is a small distraction that is quickly put aside when the next scene arrives.

Music Director Joseph Donahoe III plays several instruments and several roles, including Young Dylan’s buddy, Jim. With just a piano, two guitars, and a violin that made a short appearance, the music is understated, sometimes mournful, sometimes joyful, sometimes sweet, with always just the right feel to it. His musical cohort is Brandon Berry, who also plays one of the boys and several other roles.

The production staff do fine work, creating a feel for a time almost a hundred years past through Set Design by Primo Thomas, Lighting Design by Matt DiVita, Sound Design by Tom Makar and Costume Design by Vivian DelBello.

And what would Christmas in Wales be without “spooky stories and sing-songs?” They are in abundance in this delightful, nostalgia-filled, lively production. While traditions may differ, the themes are universal and, if you are of a certain age, you will find yourself back with the family, friends, hopes, and dreams of your youth.

A Child’s Christmas in Wales is at Irish Classical Theatre Company through December 15th.

A Child's Christmas in Wales