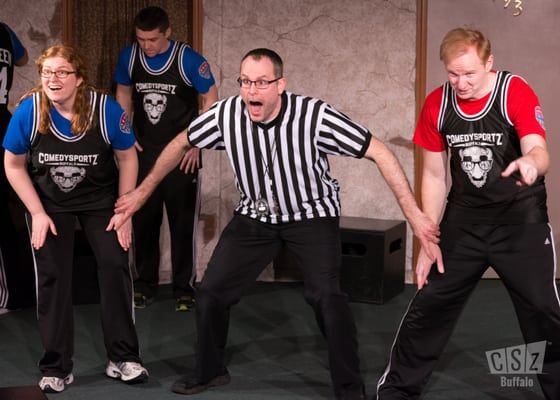 CSz Buffalo keeps its audience engaged with its flagship production, ComedySportz, by presenting improvisational comedy as a sport - two team of comedians try to out-funny each other, as a referee keeps watch over the competition, dishes out points, and calls fouls. The audience (loyal fans) cheers its favorite team on to victory, provides suggestions for each game and, ultimately, determines the winner of the match. ComedySportz matches are always all-ages affairs - funny enough for a night out with friends, and clean enough for Grandma.

ComedySportz has been awarded Artvoice's "Best Genre-Defying Artist" four times, and defeated 23 other cities to be named the 2013 ComedySportz World Champions.

If you want to learn improvisation, CSz Education offers improv classes for all levels - Improv for Kids, High School League, Kids and Teen Summer Camps, and 3 Levels of improv classes for adults that feed into their Minor League conservatory. CSz classes are a great opportunity to break out of your shell. To try something different. To learn something new.

CSz Buffalo also hosts CSz After Hours, a rotating lineup of adults-only (18+) comedy entertainment. End (or start) your night with some big belly laughs brought to you by improv shows meant for the night-owl crowd.