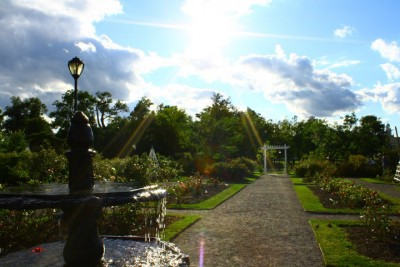 The centerpiece of the Buffalo park system is Delaware Park, originally known simply as "The Park". Description It is one of the relatively few true parks Frederick Law Olmsted created; to Olmsted, only a very large, naturalistic site which would completely shield the visitor from the bustle and cares of the city could be considered a "park".

Delaware Park has three prime elements: a prominent water feature (the "Gala Water", now named "Hoyt Lake", of 42 acres formed by damming Scajaquada Creek), a large meadow of about 120 acres, and significant wooded areas. Located at what at the time was the outskirts of Buffalo, the park was crossed by only one city street. Broad parkways connected this park with The Parade and The Front, the two smaller pleasure grounds of his original Buffalo design.