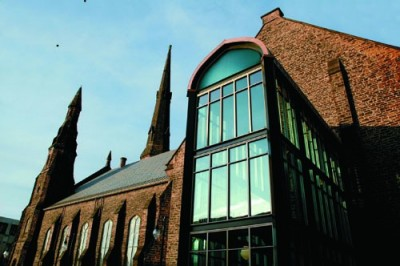 Babeville
a promise of things to come

Built during Buffalo’s Golden Age—the era when Mark Twain, Grover Cleveland, and Frederick Law Olmsted were all making their mark on the city—Babeville is located at the crossroads of three National and Local Historic Districts. Boasting one of downtown’s most recognizable steeples, a magnificent exterior of Medina sandstone, and a roof of Vermont slate, it is the last known surviving example of the work of architect John Selkirk.

Babeville is in fact two buildings: the sanctuary, which faces Delaware Avenue, and the parish house, which faces Tupper. Viewed from outside, they appear to be a single entity—which is not a bad metaphor for the way that Babeville brings together past and future, art and commerce, private and public funding.

upcoming events at this venue