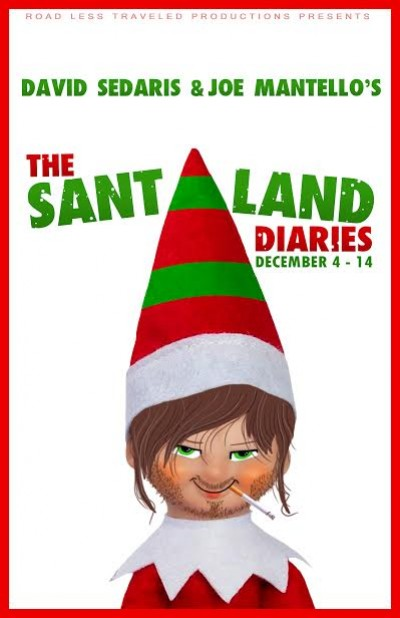 Who needs Ebenezer Scrooge when you’ve got a lippy manchild in green tights and bells? RLTP launches a new Yuletide tradition with this limited engagement of author David Sedaris’ modern holiday classic Santaland Diaries. Infamous from its annual rotation on National Public Radio’s “This American Life,” this expanded theatrical monologue tracks David’s epic journey from an aimless existence as a snarky New York layabout (“twenty dollars away from walking dogs”) to a promising and only semi-humiliating seasonal career as a Macy’s department store elf.

Despite his distaste for adults in costumes and his lack of any marketable skills whatsoever, David is tapped to join the proud ranks of the diminutive, the jug-eared, and the chinless as an official underling to a legion of faux Santa Clauses. As “Crumpet the Elf,” David must lure unwitting shoppers into the labyrinth that is Santaland, sell them photographic keepsakes of their visit, and maintain his composure under the perpetual procession of indignities rained upon him by neurotic toddlers, parents, and co-workers.

RLTP’s production of this hilariously irreverent one-man show features the adorably irascible Marc Sacco in the role of the adorably irascible David Sedaris. A note for NPR fans: Santaland Diaries will be presented uncensored and unabridged, and will therefore feature a touch of salty language not heard on “This American Life” and potentially not appropriate for all ages.