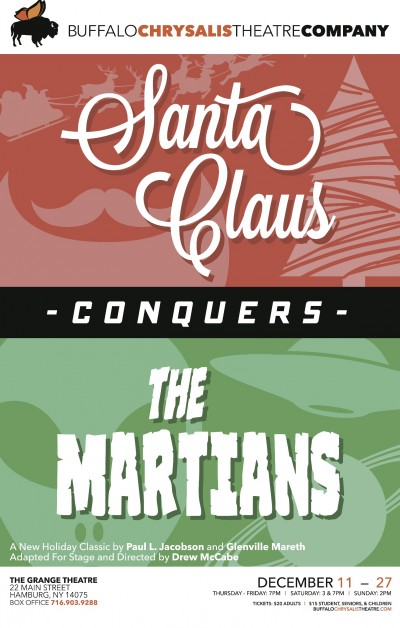 Martians kidnap Santa Claus in a hilarious Christmas adventure that the whole family can enjoy.

Santa Claus Conquers the Martians, written by Paul L. Jacobson and Glenville Mareth, has recently been adapted to the stage by Drew McCabe from the 1964 science fiction film that took on newfound fame in the 1990's after being featured on an episode of the popular Mystery Science Theater 3000 and Elvira's Movie Macabre.

The children of Mars are glued to their families' TV sets watching reports about Santa Claus and dreaming of their own Christmas. The Martian parents are concerned about their children's new obsession and send emissaries to Earth to bring Santa back to fix their problem. After arriving on Earth, the Martians are discovered by two earth children who they order to lead them to Santa's workshop. Santa and the children are then abducted and taken back to Mars.

In this wild adventure to get back to Earth to save Christmas, we meet Martians, sing with elves, meet Mrs. Claus, battle robots, and dodge polar bears - a new family holiday adventure to share with the family.

For tickets, go to www.buffalochrysalistheatre.com or call the box office at  716.903.9288