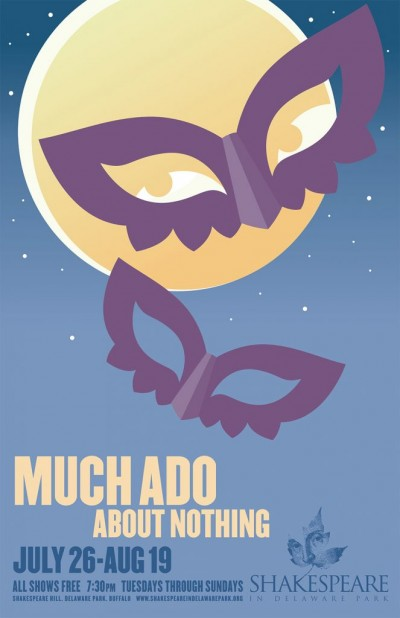 Don Pedro, Prince of Arragon, pays a visit to Leonato, the governor of Messina.  Accompanying Don Pedro are two of his officers, Benedick and Claudio, as well as his illegitimate brother, Don John. While in Messina, Claudio falls for Leonato’s daughter, Hero. The young lovers are soon betrothed. Meanwhile, Benedick verbally spars with Beatrice, the governor’s clever niece.  Each declaring, a little too emphatically, that they cannot stand the other. To pass the week before the wedding, Don Pedro, Leonato and Claudio conspire to sport with Benedick and Beatrice in an effort to make them admit their love for one another.  Both Benedick and Beatrice will be tricked into believing that the other has professed a great love for them.

The wedding of Claudio and Hero approaches, but Don John, with the aid of his companions, Borachio and Conrade, plot against it, bringing Hero’s virtue into question. Claudio falls for the ruse and denounces Hero at the altar. Friar Francis convinces the family to announce that Hero has died of grief from the proceeding. Hero is hidden away while the family tries to uncover the truth.  Beatrice alone maintains Hero’s innocence, and after professing her love to Benedick, implores him to confront Claudio and defend Hero’s honor.

Borachio drunkenly boasts of his part in the plot to defame Hero, and is arrested by the night watchmen. He and Conrade are turned over to Dogberry and Verges, the bumbling heads of the local constabulary.  After a hearing before the Sexton, the villains are found out, and Hero is exonerated.  But, Don John has managed to escape from Messina.  Leonato tells Claudio, that he will allow Claudio to marry one of his nieces in Hero’s place—a niece that turns out to be none other than Hero herself. Claudio and Hero are reunited, Benedick and Beatrice wed alongside them, and they receive the news that the bastard Don John has been apprehended.