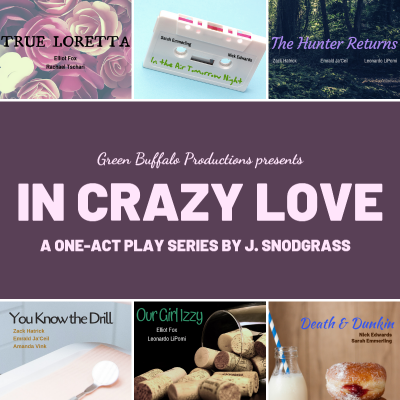 Green Buffalo Productions' next feature production is In Crazy Love: A One-Act Play Series by j. Snodgrass. This series of 10-minute plays pulls back the curtain on all kinds of relationships while teaching a course in the absurdity of romantic love. Whether you're a lover or a fighter, we're certain this show will have you begging for more.

IN THE AIR TOMORROW NIGHT: Karen's husband finally joins her in the afterlife, but she disapproves of the vengeful vigilante rampage he undertook in her name.
​
THE HUNTER RETURNS: Stumbling through a forest, looking for cell phone reception, Action meets a mysterious stranger chained to a tree. He has unwittingly entered the realm of a hunter-goddess, from which no man escapes alive.

YOU KNOW THE DRILL: Valleria is an enthusiastic amateur dentist who wants to go pro, now she just needs a few unsuspecting patients to practice on.

OUR GIRL IZZY: Dan, an undercover vice cop, seeks to reconnect with his estranged long-term boyfriend Stephen and his daughter. But after years of lies and danger, Stephen is wary of allowing Dan back into their lives.

DEATH & DUNKIN: Mack has been working at Dunkin Donuts for years and what does he have to show for it? Beth has a few ideas to get him out of his post-graduate slump.